The Juilliard School ( /ˈdʒuːliɑːrd/) [1] is a private performing arts conservatory in New York City. Established in 1905, the school trains about 850 undergraduate and graduate students in dance, drama, and music. It is widely regarded as one of the world's leading drama, music and dance schools, with some of the most prestigious arts programs. [2] [3] [4] 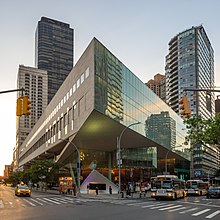 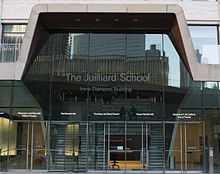 In 1905, the Institute of Musical Art, Juilliard's predecessor institution, was founded on the premise that the United States did not have a premier music school and too many students were going to Europe to study music.The School's name was changed to The Juilliard School to reflect its broadened mission to educate musicians, directors, and actors. [5] The Institute opened in the former Lenox Mansion, Fifth Avenue and 12th Street, on October 11. It moved in 1910 to 120 Claremont Avenue in the Morningside Heights neighborhood of Manhattan, onto a property purchased from Bloomingdale Insane Asylum. [6] In 1920, the Juilliard Foundation was created, named after textile merchant Augustus D. Juilliard, who bequeathed a substantial amount of money for the advancement of music in the United States. In 1924, the foundation purchased the Vanderbilt family guesthouse at 49 E. 52nd Street, and established the Juilliard Graduate School. [7] In 1926, the Juilliard School of Music was created through a merger of the Institute of Musical Art and the Juilliard Graduate School. The two schools shared a common board of directors and president ( Columbia University professor John Erskine) but retained their distinct identities. The conductor and music-educator Frank Damrosch continued as the Institute's dean, and the Australian pianist and composer Ernest Hutcheson was appointed dean of the Graduate School. In 1937, Hutcheson succeeded Erskine as president of the two institutions, a job he held until 1945. In 1946, the Institute of Musical Art and the Juilliard Graduate School completely merged to form a single institution. [8] The president of the school at that time was William Schuman, the first winner of the Pulitzer Prize for Music. Schuman established the Juilliard String Quartet in 1946 and the Dance Division in 1951, under the direction of Martha Hill.

William Schuman graduated from Columbia's Teachers College (BS 1935, MA 1937) and attended the Juilliard Summer School in 1932, 1933 and 1936. While attending Juilliard Summer School, he developed a personal dislike for traditional music theory and ear training curricula, finding little value in counterpoint and dictation. Soon after being appointed as president of the Juilliard School of Music in 1945, William Schuman created a new curriculum called the Literature and Materials of Music (L&M), designed for composers to teach. L&M was a reaction against more formal theory and ear training, and as a result did not have a formal structure. The general mandate was "to give the student an awareness of the dynamic nature of the materials of music." The quality and degree of each student's education in harmony, music history, or ear training was dependent on how each composer-teacher decided to interpret this mandate.

William Schuman resigned as president of Juilliard after being elected president of Lincoln Center in 1962. Peter Mennin, another composer with directorial experience at the Peabody Conservatory, was elected as his successor. Mennin made significant changes to the L&M program—ending ear training and music history and hiring the well known pedagogue Renée Longy to teach solfège. In 1968, Mennin hired John Houseman to manage a new Drama Division, and in 1969 oversaw Juilliard's relocation from Claremont Avenue to Lincoln Center. The School's name was changed to The Juilliard School to reflect its broadened mission to educate musicians, directors, and actors. [5]

Dr. Joseph W. Polisi became president of Juilliard in 1984 after Peter Mennin died. Polisi's many accomplishments include philanthropic successes, broadening of the curriculum and establishment of dormitories for Juilliard's students. In 2001, the school established a jazz performance training program. In September 2005, Colin Davis conducted an orchestra that combined students from the Juilliard and London's Royal Academy of Music at the BBC Proms, and during 2008 the Juilliard Orchestra embarked on a successful tour of China, performing concerts as part of the Cultural Olympiad in Beijing, Suzhou, and Shanghai under the expert leadership of Maestro Xian Zhang.

In 1999, the Juilliard School was awarded the National Medal of Arts. [9]

In 2006, Juilliard received a trove of precious music manuscripts from board chair and philanthropist Bruce Kovner. The collection includes autograph scores, sketches, composer-emended proofs and first editions of major works by Mozart, Bach, Beethoven, Brahms, Schumann, Chopin, Schubert, Liszt, Ravel, Stravinsky, Copland, and other masters of the classical music canon. Many of the manuscripts had been unavailable for generations. Among the items are the printer's manuscript of Beethoven's Ninth Symphony, complete with Beethoven's handwritten amendments, that was used for the first performance in Vienna in 1824; Mozart's autograph of the wind parts of the final scene of The Marriage of Figaro; Beethoven's arrangement of his monumental Große Fuge for piano four hands; Schumann's working draft of his Symphony No. 2; and manuscripts of Brahms's Symphony No. 2 and Piano Concerto No. 2. The entire collection has since been digitized and can be viewed online. [10] In 2010, philanthropist James S. Marcus donated $10 million to the school to establish the Ellen and James S. Marcus Institute for Vocal Arts at the school. [11]

On September 28, 2015, the Juilliard School announced a major expansion into Tianjin during a visit by China's first lady, Peng Liyuan, the institution's first such full-scale foray outside the United States, with plans to offer a master's degree program. [12]

Juilliard admits both degree program seekers and pre-college division students. The latter enter a conservatory program for younger students to develop their skills; [14] All applicants who wish to enroll in the Music Advancement Program, for the Pre-College Division, must perform an audition in person before members of the faculty and administration and must be between ages 8 and 18.

The Juilliard admissions program comprises several distinct steps. Applicants must submit a complete application, school transcripts, and recommendations; [15] some majors also require that applicants submit prescreening recordings of their work, which are evaluated as part of the application. [16] A limited number of applicants are then invited to a live audition, [15] [16] sometimes with additional callbacks. [15] After auditions, the school invites select applicants to meet with a program administrator.

The school offers courses in dance, drama, and music.

The Dance Division was established in 1951 by William Schuman with Martha Hill as its director. It offers a Bachelor of Fine Arts or a Diploma. [21]

The Drama Division was established in 1968 by the actor John Houseman and Michel Saint-Denis. Its acting programs offer a Bachelor of Fine Arts, a Diploma and, beginning in Fall 2012, a Master of Fine Arts. [22] Until 2006, when James Houghton became director of the Drama Division, there was a "cut system" that would remove up to one-third of the second-year class. The Lila Acheson Wallace American Playwrights Program, begun in 1993, offers one-year, tuition-free, graduate fellowships; selected students may be offered a second-year extension and receive an Artist Diploma. The Andrew W. Mellon Artist Diploma Program for Theatre Directors was a two-year graduate fellowship that began in 1995 (expanded to three years in 1997) this was discontinued from autumn 2006.

All students study solfège and music theory in addition to their primary instrument. Vocal majors must also study diction and performance. Similarly, pianists must study piano performance. String, brass and woodwind players, as well as percussionists, also participate in orchestra. The pre-college has two orchestras, the Pre-College Symphony (PCS) and the Pre-College Orchestra (PCO). Placement is by age and students may elect to study conducting, chorus, and chamber music.

The Music Technology Center at the Juilliard School was created in 1993 to provide students with the opportunity to use digital technology in the creation and performance of new music. Since then, the program has expanded to include a wide offering of classes such as, Introduction to Music Technology, Music Production, Film scoring, Computers In Performance and an Independent Study In Composition. [25]

The Juilliard Electric Ensemble was created in 2003 to provide students from all three of Juilliard's divisions ( dance, drama, and music) with an opportunity to use new technology in the creation and performance of interactive and multi-disciplinary work.

In past performances, the Juilliard Electric Ensemble has used interactive technology to expand the range of their instruments, control audio and visual elements with electronic tools, shape video and projection design in real-time by moving through a virtual field, and interact with artists and computers around the world via the web. 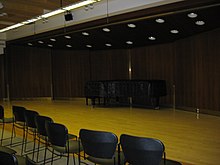 Morse Hall, one of the performing spaces inside the Juilliard School

The Juilliard School has a variety of ensembles, including chamber music, jazz, orchestras, and vocal/ choral groups. Juilliard's orchestras include the Juilliard Orchestra, the New Juilliard Ensemble, the Juilliard Theatre Orchestra, and the Conductors' Orchestra. The Axiom Ensemble is a student directed and managed group dedicated to well-known 20th-century works.

In addition, Juilliard resident ensembles, which feature faculty members, perform frequently at the school. These groups include the Juilliard String Quartet and the American Brass Quintet.

The Juilliard Second Century Fund aims to raise $300 million to enable the Juilliard School to sustain its eminence in performing arts education well into the school's next century. [26] The tuition for 2019-20 is $47,370 for the school year, with total expenses of $69–73,500. [27] Expanded and renamed on Juilliard's 100th anniversary, the fund supports six components that help Juilliard continue to recruit the world's best young artists and faculty, offer educational programs that maintain the quality of a Juilliard education, and increase the size and functionality of Juilliard's physical plant.

In April 2009, it was announced that the Music Advancement Program (MAP) would be curtailed due to budget reductions. After strong opposition to the reductions, the program, which helps inner-city children get music lessons, was then reinstated after several donors pledged money to support it.