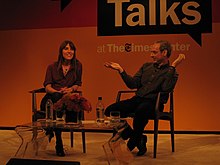 Jon Pareles (born October 25, 1953 [1]) is an American journalist who is the chief popular music critic in the arts section of The New York Times. [2]

Pareles was born in Connecticut. [1] He played jazz flute and piano, and graduated from Yale University with a degree in music. He began working as a music critic in 1977. [3]

In the 1970s, he was an associate editor of Crawdaddy!, where he published his first works (outside school publications); [4] and in the 1980s, an associate editor at Rolling Stone and the music editor at The Village Voice. He started contributing to The Times in 1982. [3] He reviews popular music in the arts section of The Times. [4]