Jefferson City, informally Jeff City, [1] is the capital of Missouri. It had a population of 43,228 at the 2020 census, [7] ranking as the 15th most populous city in the state. [8] It is also the county seat of Cole County and the principal city of the Jefferson City Metropolitan Statistical Area, the second-most-populous metropolitan area in Mid-Missouri and the fifth-largest in the state. Most of the city is in Cole County, with a small northern section extending into Callaway County. Jefferson City is named for Thomas Jefferson, the third President of the United States.

Jefferson City is located on the northern edge of the Ozark Plateau on the southern side of the Missouri River in a region known as Mid-Missouri, that is roughly mid-way between the state's two large urban areas of Kansas City and St. Louis. It is 29 miles (47 km) south of Columbia, Missouri, and sits at the western edge of the Missouri Rhineland, one of the major wine-producing regions of the Midwest. The city is dominated by the domed Capitol, which rises from a bluff overlooking the Missouri River to the north; Lewis and Clark passed the bluff on their historic expedition upriver before Europeans established any settlement there.

Sketch of Jefferson City from the 1860s 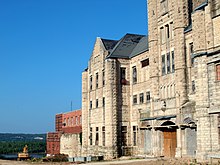 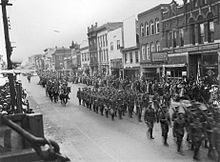 In pre-Columbian times, this region was home of an ancient people known only as the "Mound Builders", being replaced by Osage Native Americans. In the late 17th century, frontiersmen started to inhabit the area, including Antoine de la Mothe Cadillac, Louis Jolliet, Jacques Marquette, Robert de LaSalle, and Daniel Boone, with the latter having the greatest influence on the region. Daniel Boone's son, Daniel Morgan Boone, would later lay out Jefferson City in the early 19th century.

When the Missouri Territory was organized in 1812, St. Louis was Missouri's seat of government, and St. Charles would serve as the next capital. However Jefferson City was chosen as the new capital in 1821. The village first was called "Lohman's Landing", and when the legislature decided to relocate there, they proposed the name "Missouriopolis" before settling on the city of "Jefferson" to honor Thomas Jefferson. [10] [11] Over the years, the city was most often referred to as "Jefferson City" and the name stuck. For years, this village was little more than a trading post located in the wilderness about midway between St. Louis and Kansas City. In 1825, the settlement was incorporated as a city and a year later, the Missouri legislature first met in Jefferson City.

During the Civil War, Jefferson City was occupied by Union troops and the elected state legislature was driven from Jefferson City by Union General Nathaniel Lyon. Some of the legislators later reconvened in Neosho and passed an ordinance of secession. Missouri was claimed by both the Confederacy and the Union, as was neighboring state Kentucky. Missourians were strongly divided and many people in the state—especially in St. Louis—supported the Union, while other areas (such as Missouri's Little Dixie) were strongly pro- Confederate along the Missouri River between Jefferson City and Kansas City.

German immigrants created vineyards in small towns on either side of the Missouri River, especially on the north from the city east to Marthasville, located outside of St. Louis. Known as the " Missouri Rhineland" for its vineyards and first established by German immigrants in the mid-1800s, this region has become part of Missouri's agricultural and tourist economy.

The city won a 2013 essay contest sponsored by Rand McNally, and was named "Most Beautiful Small Town". [12]

See also: Tornado outbreak of May 2019

Approximately 15 minutes before midnight on May 22, 2019, a tornado emergency was issued for the Jefferson City area. Minutes later, a destructive EF-3 [13] tornado caused extensive damage on the southwest side of the city. [14] [15] At least 20 people were injured, but none were killed due to this tornado. [16]

Jefferson City has a humid continental climate (Dfa) with hot, rainy summers and cold winters. The city borders on having a humid subtropical climate but falls just short due to January having a mean temperature of 30 °F (−1 °C) which is below the 32 °F (0 °C) isothern. Thunderstorms are common in both the spring and summer. Light snow is common during the winter, although about half of wintertime precipitation falls as rain. [18]

Jefferson City's economy is driven by its residents, citizens of surrounding communities, and tourists. 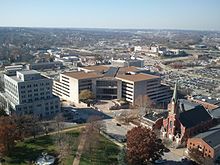 The 118,000-square-foot courthouse is named for the former Governor and United States Senator from Missouri. The courthouse, which is occupied by the Central Division of the United States District Court for the Western District of Missouri and under the appellate jurisdiction of the United States Court of Appeals for the Eighth Circuit, was designed to achieve the U.S. Green Building Council's LEED Gold rating. Sustainable design features include reducing water use by 44 percent, using 13 percent recycled content, diverting 80 percent of construction waste materials from landfills, and it is 36 percent more efficient than current energy standards. [28]

Jefferson City, along with Columbia, is part of the Mid-Missouri television market. KRCG, the region's CBS affiliate, and KNLJ, a station owned by the Christian Television Network (CTN), are both licensed to the city.

The following is a list of radio stations that broadcast from and/or are licensed to Jefferson City, Missouri.

Federal highways are U.S. Routes 50, 54, and 63. Missouri Routes 179 and 94 also run through the city. Jefferson City is one of the four state capitals that is not served by an Interstate highway; [30] Interstate 70 passes by the city 30 miles (48 km) to the north in Columbia.

The city is served by Columbia Regional Airport and nearby Jefferson City Memorial Airport. [31] [32]

JeffTran, the city operated public transit system, provides year-round bus service during traditional weekday business hours, [33] but is currently considering the extension of service hours to include evenings and weekends. [34]

The Jefferson City station, located in the former Union Hotel at Jefferson Landing State Historic Site, is one of the Missouri River Runner train stops between Kansas City and St. Louis, provided by Amtrak, the sole intercity passenger railroad service in the United States.

Jefferson City is home to SSM Health St. Mary's Hospital which has 154 beds.