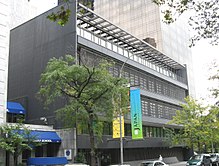 The Japan Society in Manhattan

As of the 2000 Census, over half of the 37,279 people of Japanese ancestry in the U.S. state of New York lived in New York City. [2] As of 2012, the New York City metropolitan area was home to the largest Japanese community on the East Coast of the United States. [3]

The National Origins Act of 1924 officially barred Japanese immigration into the United States. By the 1920s, Issei with high socioeconomic status had moved to Long Island and to New Rochelle and Scarsdale in Westchester County. [2]

After the attack on Pearl Harbor in 1941 the Japanese consulate in New York City closed. Several Japanese businesses closed as well. The overall New York State Japanese population was not mass-interned. Issei community leaders were interned at Ellis Island. After the internment of Japanese Americans ended, New York's Japanese community accepted the arrivals who had formerly been interned. [2]

Japanese officials connected with the United Nations arrived in the 1950s and businesspeople associated with Japanese companies began arriving in the late 1950s. [4] Japanese immigrants became the main presence of Japanese communities after the passage of the Immigration and Nationality Act of 1965. [2] By 1988 there were 50,000 Japanese businesspersons working in Greater New York City, with 77% of them being temporary employees with plans to return to Japan. [5] At that time employees of Japanese companies and their families were over 80% of the Japanese residents of the New York City area. [6] About 25% of Japanese residents in the New York City metropolitan area had considered and/or decided to stay in the United States permanently. [7] 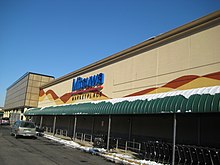 In March 2011, Sam Dolnick and Kirk Semple of The New York Times wrote that the "prominent outpost of Japanese culture" in New York City was a group of sake bars and sushi restaurants in the East Village neighborhood of Manhattan. [8] In December 2014, Pete Wells of The Times heralded the clusters of Japanese restaurants in the East Village and on the east side of Midtown Manhattan for their variety of dishes and the excellence of their food; [9] this latter neighborhood in Midtown East also houses the Japan Society and the Consulate-General of Japan in New York City, as well as Japanese cafes, markets, and corporate offices, [8] although it is not formally recognized as a Japantown.

As of 2007, there were 51,705 Japanese persons living in the New York metropolitan area. Westchester County, New York and Bergen County, New Jersey were popular points of settlement. [3]

As of 2011, the Japanese population in Bergen County, New Jersey, had rebounded to approximately 6,000 individuals. Dolnick and Semple of The New York Times also wrote in 2011 that Japanese supermarkets such as the Mitsuwa Marketplace in Edgewater, New Jersey, the largest Japanese-oriented shopping center on the U.S. East Coast, are "the closest thing to hubs" of Japanese influence in Greater New York City. [8] The Japanese-American Society of New Jersey is based in Fort Lee. [13]

As of 2000, Japanese expatriates in Westchester County, New York, living mostly in Scarsdale, and according to The New York Times, it was well known in Japan as a place with good housing stock and schools. [15] As of 2000, some Japanese also lived in Eastchester, Harrison, Hartsdale, and Rye. [15]

As of 2011, there were about 20,000 Japanese in New York City and a total of 45,000 in the Greater New York City area. Many of the Japanese are from transient groups such as university students, artists, and business workers. Many expatriate business executives and workers are posted to the United States for three to five year terms. As of 2011 65% of the Japanese in New York City have bachelor's degrees and the median income for Japanese over the age of 25 is $60,000. This is $10,000 above the citywide median income. [8] 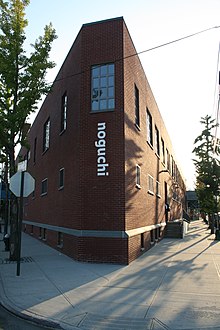 In 2011, Sam Dolnick and Kirk Semple of The New York Times wrote that few Japanese organizations in New York City have "broad-based constituencies" and those that exist tend to promote Japanese arts and assist elderly populations. [8] They added that among the Japanese community there are "few" civic or religious leaders with prominence. [8]

The Japanese American Association of New York (JAA, ニューヨーク日系人会 Nyūyōku Nikkeijin Kai) is in operation. [8] There is a Consulate-General of Japan in New York City located on the 18th Floor of 299 Park Avenue in Midtown Manhattan. [17] The Japanese American Committee for Democracy was active during WWII. [18]

The Noguchi Museum is located in Long Island City, Queens.

The Shukan NY Seikatsu (週刊NY生活), published by the New York Seikatsu Press, is a weekly Japanese-language newspaper in the New York City area. It was founded in January 2004. The paper is headquartered in Midtown Manhattan. [19]

From 1901 to 1925, the Japanese American Commercial Weekly (日米週報 Nichi-Bei Shūhō) was published and served as the community's newspaper. [2] The Japanese name of the paper after 1918 became the 日米時報 Nichi-Bei Jihō. [20] [21]

This List contains the anime and manga the city of New York has been based on Japanese culture.

In 1983, the majority of Japanese national students within Greater New York City attended U.S. schools. To have education in the Japanese language and Japanese literature, [26] they attend the weekend classes offered by the Japanese Weekend School of New York. The parents who select the weekend school and local school combination often wish to raise their children as international and connected to foreign cultures, [27] while parents choosing the Japanese day schools wish to raise them as typical Japanese children. As of 1988 over 30% of the New York City area parents of school age children selected the full-time NYJS instead of the weekend school and local school combination. [28]

By 1991 Lyceum Kennedy, a French-American private school, had established a program for Japanese students. [29] [30]

An influx of Japanese businesspersons into Scarsdale caused the Asian population of Scarsdale High School to increase from 5% around 1986 to almost 20% in 1991. [31] That year 19.3% of the students in the Scarsdale Public Schools were Japanese. [32]

There are three supplementary Japanese school systems in the New York City area. [3] Two of them, the weekend schools of New York and New Jersey, are operated by the JEI. [33]

The Japanese Weekend School of New York has its offices in New Roc City in New Rochelle, New York. [34] As of 2006 the school had about 800 students, including Japanese citizens, and Japanese Americans, at locations in Westchester County and Long Island. [35] The class locations include The Rufus King School (P.S.26Q) in Fresh Meadows, Queens, [36] and Port Chester Middle School in Port Chester, New York. [37]

The Japanese Weekend School of New Jersey (ニュージャージー補習授業校 Nyūjājī Hoshū Jugyō Kō) holds its classes at Paramus Catholic High School in Paramus, New Jersey while its offices are in Fort Lee, New Jersey. [38] The school previously used parents as teachers, with them acting in a volunteer capacity, but by 1994 it switched to using paid teachers and collected tuition from parents, about $1,000 every four months. In the 1990s its classes were held at different campuses: C, H, J, and N. N only held elementary classes while J held only secondary classes. The first, second, and fourth campuses were in Clifton, Hackensack, and Fort Lee, respectively. By 1994, due to a decline in the Japanese economy, the weekend school was not getting as many students as it used to. [39]

The Princeton Community Japanese Language School (PCJLS) also serves Japanese residents living in the New York City area. [40] It is not affiliated with the JEI.

In 1987 there were five juku (cram schools) in Bergen County, New Jersey, with two of them in Fort Lee. One of the Fort Lee schools, Hinoki School, had 130 students. [14]

The Princeton Japanese Church (プリンストン日本語教会, Purinsuton Nihongo Kyōkai), catering to the Princeton, New Jersey area Japanese community, is in nearby Monmouth Junction, South Brunswick. It was established in October 1991, and in 1993 had 20-25 attendees per Sunday church worship. [41]

Japanese nationals and immigrants include:

In 2011, the New American Leaders Project stated that it was not aware of any first or second generation Japanese immigrant in a citywide office in New York City or a statewide New York office. [8]