From Wikipedia, the free encyclopedia
1957 film by Roy Lockwood

Jamboree, known as Disc Jockey Jamboree in the United Kingdom, is a 1957 American rock and roll film directed by Roy Lockwood. Its story is about a boy and girl, Pete Porter and Honey Wynn (played respectively by Paul Carr and Freda Holloway), who become overnight sensations as a romantic singing duo who run into trouble when their squabbling managers ( Kay Medford and Bob Pastene), try to turn them into solo acts. Against this backdrop in cameo performances appear some of the biggest names of rock and roll in the 1950s lip-syncing to their recordings.

Jamboree is a film that was built upon the popularity of a name which at the time was becoming associated with rock and roll music and it appears to have derived its name from a show starring disc-jockey Alan Freed that began airing over Radio Luxembourg in 1956 (the year before this movie was released). Freed recorded his featured segment while working for WINS in New York City. A great rivalry developed during this time between Alan Freed and Dick Clark who appears in this film. Freed was the pioneer of rock and roll movies ( Rock Around the Clock; Don't Knock the Rock; Rock, Rock, Rock), however, Congressional Hearings into payola practices and radio broadcasting eventually ruined Freed's career, while Clark's career continued uninterrupted.

Included in Jamboree are Buddy Knox, who performs " Hula Love", a no. 9 hit on the Billboard pop singles chart; Jimmy Bowen, performs "Cross Over"; Dick Clark acting as the host for a show within the film, which was released shortly after first who appearing as host of American Bandstand on TV; Fats Domino, who performs "Wait and See"; Charlie Gracie (who became an even bigger hit in the UK than he was in the United States), who performs "Cool Baby"; Jack Jackson (British bandleader who acted as the disc jockey host of the Decca records show on Radio Luxembourg; Jerry Lee Lewis (who belts out " Great Balls of Fire" in a version that is different from the Sun 45 release); Lewis Lymon and the Teenchords; [1] Jack Payne (another British band leader); Carl Perkins (who sings " Glad All Over"); Jodie Sands, who performs "Sayonara"; Frankie Avalon, who sings "Teacher's Pet"; Slim Whitman, who gathered a tremendous following in Europe, who performs "Unchain My Heart"; Aaron Schroeder in a cameo role as the Songwriter; The Four Coins, who perform "A Broken Promise"; and, Count Basie and his Orchestra, featuring Joe Williams on vocals. Connie Francis overdubbed her vocals for Freda Holloway.

Brazilian singer Cauby Peixoto has a cameo appearance in the film under the name "Ron Coby". Cauby had a brief rock and roll phase is in his career, recording "Rock'n'Roll in Copacabana". 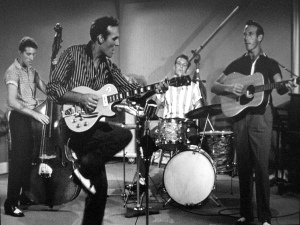 Dick Clark is the host of the "second hour" of a "United Charities" Telethon to raise money to fight what is described only as "this dreaded disease". Clark is listed as a DJ for WFIL Philadelphia in the credits (at the time this was filmed, he was also hosting the original Philadelphia edition of what eventually became American Bandstand). Clark introduces a number of disc jockey's from across the US and Canada. These DJs then introduce the featured stars. Later in the film DJs in Europe: Jack Jackson (ATV) and Chris Payne ( BBC) in London, England; Werner Goetze ( Bayerischer Rundfunk) Munich, and Chris Howland ( Westdeutscher Rundfunk) Cologne, Germany are shown introducing "Pete and Honey" records on the air. Finally, performances are the entertainment at a Music Operators of America convention supper, a group of jukebox owners that bought 150 records a week in the 1950s. [2]