From Wikipedia, the free encyclopedia
Road in Kuala Lumpur, Malaysia

Jalan Ampang or Ampang Road ( Selangor state route B31) is a major road in Klang Valley region, Selangor and Federal Territory of Kuala Lumpur, Malaysia. Built in the 1880s, it is one of the oldest roads in the Klang Valley. It is a main road to Ampang Jaya and is easily accessible from Jalan Tun Razak or Jalan Ulu Klang (now part of the Kuala Lumpur Middle Ring Road 2 Route 28) from the Hulu Kelang or Setapak direction. It is also accessible from Cheras through Jalan Shamelin, from Jalan Tun Razak through Jalan Kampung Pandan via Taman Cempaka, from Kampung Pandan through Jalan Kampung Pandan Dalam via Taman Nirwana, from the Kuala Lumpur Middle Ring Road 2 via Pandan Indah & Taman Kencana and from Hulu Langat town through the mountain pass. Wangsa Maju, Setapak, central Kuala Lumpur, Ampang Park and Salak South surround Ampang. Jalan Ampang became the backbone of the road system linking Ampang to Kuala Lumpur before being surpassed by the Ampang–Kuala Lumpur Elevated Highway (AKLEH)

Kuala Lumpur was founded in 1857 at the confluence of the Sungei Lumpur (now Gombak River) and the Klang River, which now houses the Kuala Lumpur Jamek Mosque. Before the arrival of the Chinese people for the tin mining purposes, Kuala Lumpur was occupied by ethnic Malay settlers most notably Javanese, Mandailings, Bugis and Rawa.[ citation needed][ dubious – discuss] In 1849, Chee Yam Chuan and other merchants from Malacca lent Raja Abdullah large sums of money to start operation of tin mines in Ampang, granted by Sultan Muhammad. [2] This soon attracted other Chinese shopkeepers which led to turning the isolated jungle settlement into a small town, [2] of which Ampang, one of the earliest areas in the Klang Valley, opened for tin mining.

Ampang Road, as it was called then, has existed since the 1880s. It is one of Kuala Lumpur's earliest roads, leading from the tin mining village of Ampang to the heart of the city along the Ampang River. The road was widened in 1888 by G. T. Tickell, the then chairman of the Kuala Lumpur Sanitary Board. In Kuala Lumpur, the street then led on to Ampang Street (now known as Leboh Ampang) to its Chinese shophouses and the Malay village of Kampung Rawa (today known as Kampung Baru).

The old Ampang Road also housed the Selangor Turf Club (present grounds of the Petronas Twin Towers) and the Griffin Inn (an old colonial bar and night-club). Adjoining and across from these properties, the houses and land were owned by Loke Chow Kit. The latter (owner of Chow Kit & Co, a department store) had his country-residence at the corner of Ampang Road and Treacher Road. Other notables who lived on Ampang Road were the families of Choo Kia Peng and Chan Chin Mun and The Bok and The Khoo families.

Pekan Ampang, the historical town centre of Ampang Jaya, is situated approximately 3 km from Kampung Lembah Jaya small village. The architecture of the town shares similarities with most towns and cities elsewhere in Malaya during the British colonial period. Pekan Ampang is still administratively a separate town, falling under the Ampang Jaya Municipal Council, but it was often included as part of the metropolitan area of Kuala Lumpur.

Major landmarks along the road 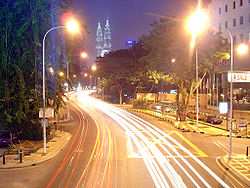 The road generally runs in an east–west direction, starting from the junction of Leboh Ampang and Jalan Gereja in the Masjid Jamek area. The road continues northeastward, passing Bukit Nanas on the north side of the hill and following the Klang River until Dang Wangi, where the river turns north. The road keeps running eastward past Wisma Denmark and the Petronas Twin Towers, past embassy row until it reaches the eastern KL suburb of Ampang.