From Wikipedia, the free encyclopedia
Volcanic island in the Philippine sea

Izu Ōshima (伊豆大島, Izu-ōshima) is an inhabited volcanic island in the Izu archipelago in the Philippine Sea, off the coast of Honshu, Japan, 22 km (14 mi) east of the Izu Peninsula and 36 km (22 mi) southwest of Bōsō Peninsula. [1] As with the other islands in the Izu Island group, Izu Ōshima forms part of the Fuji-Hakone-Izu National Park. [2] Izu Ōshima, at 91.06 km2 (35.16 sq mi) is the largest and closest of Tokyo's outlying islands, which also include the Ogasawara Islands. 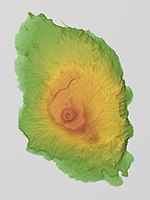 The island is a stratovolcano with a basaltic composite cone, dating from the late Pleistocene period, between 10,000 and 15,000 years ago. It rises from an ocean floor with a depth of between 300 and 400 meters (984 and 1,312 ft). The island has a roughly circular coastline of approximately 52 kilometers (32 mi) in length. The highest elevation, Mount Mihara (三原山, Mihara-san), is an active volcano with a height of 758 meters (2,487 ft). The mountain has been recorded to have erupted numerous times through history and is mentioned as far back as Nara period written records.

Major eruptions occurred in 1965 and 1986, each forcing the temporary evacuation of the inhabitants. The last recorded eruption was in 1990.

The island has been recognised as an Important Bird Area (IBA) by BirdLife International because it supports populations of Japanese wood pigeons, Ijima's leaf-warblers, Izu thrushes and Pleske's grasshopper warblers. [3]

Izu Ōshima has a humid subtropical climate ( Köppen climate classification Cfa) with warm summers and cool winters. Precipitation is abundant throughout the year, but is somewhat lower in winter than the rest of the year.

The island is administered by the Ōshima subprefecture of the Tokyo Metropolitan government. Ōshima Town (大島町, Ōshima-machi) serves as the local government of the island.

Izu Ōshima is a popular site for tourists [6] from both Tokyo and Shizuoka due to its close proximity to the mainland. There are a number of ferries which leave from Takeshiba Sanbashi Pier, near Hamamatsuchō, Tokyo to Motomachi Port. Ferries also leave from Atami in Shizuoka to Motomachi Port. Both lanes are operated by Tōkai Kisen

There are several flights per day from Ōshima Airport to Chōfu Airport in Chōfu.

Mount Mihara and Izu Ōshima featured prominently in The Return of Godzilla, as the location in which the JSDF successfully trapped Godzilla after luring him to the crater, whereupon charges were detonated, sending him falling into the magma-filled volcano. Mt. Mihara appeared again in the direct sequel, Godzilla vs. Biollante, in which Godzilla was released when the volcano erupted.

Mt. Mihara and Izu Ōshima were also featured in Koji Suzuki's Ring and its film adaptation as pivotal locations for the story.

In the Pokémon franchise, Cinnabar Island is based on Izu Ōshima.

In the anime Vividred Operation, Izu Ōshima is the home of several protagonists.