Itzhak Perlman ( Hebrew: יצחק פרלמן; born August 31, 1945) is an Israeli-American violinist widely considered one of the greatest violinists in the world. Perlman has performed worldwide and throughout the United States, in venues that have included a State Dinner at the White House honoring Queen Elizabeth II, and at President Barack Obama's inauguration. [1] He has conducted the Detroit Symphony Orchestra, the Philadelphia Orchestra, and the Westchester Philharmonic. In 2015, he was awarded the Presidential Medal of Freedom. [1] Perlman has won 16 Grammy Awards, including a Grammy Lifetime Achievement Award, and four Emmy Awards. [1]

Perlman was born in 1945 in Tel Aviv. His parents, Chaim and Shoshana Perlman, were Jewish natives of Poland and had independently emigrated to the British Mandate of Palestine (now Israel) in the mid-1930s before they met and later married. Perlman contracted polio at age four and has walked using leg braces and crutches since then [2] and plays the violin while seated. As of 2018 [update], he uses crutches or an electric Amigo scooter for mobility. [3]

Perlman first became interested in the violin after hearing a classical music performance on the radio. At the age of three, he was denied admission to the Shulamit Conservatory for being too small to hold a violin. [4] He instead taught himself how to play the instrument using a toy fiddle until he was old enough to study with Rivka Goldgart at the Shulamit Conservatory and at the Academy of Music in Tel Aviv (now the Buchmann-Mehta School of Music), where he gave his first recital at age 10. [5] He moved to the U.S. at age 13 to study at the Juilliard School [1] with the violin teacher Ivan Galamian and his assistant Dorothy DeLay. [6] 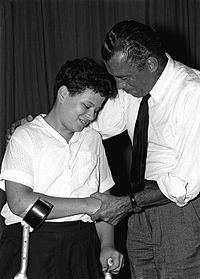 Perlman appeared on The Ed Sullivan Show twice in 1958, and again in 1964, on the same show with the Rolling Stones. [7] He made his debut at Carnegie Hall in 1963 and won the Leventritt Competition in 1964. [1] Soon afterward, he began to tour widely. In addition to an extensive recording and performance career, he has continued to make appearances on television shows such as The Tonight Show and Sesame Street as well as playing at a number of White House functions.

Although Perlman has never been billed or marketed as a singer, he sang the role of "Un carceriere" ("a jailer") on a 1981 EMI recording of Puccini's " Tosca" that featured Renata Scotto, Plácido Domingo, and Renato Bruson, with James Levine conducting. He had earlier sung the role in an excerpt from the opera on a 1980 Pension Fund Benefit Concert telecast as part of the Live from Lincoln Center series with Luciano Pavarotti as Cavaradossi and Zubin Mehta conducting the New York Philharmonic.

On July 5, 1986, Perlman performed at the New York Philharmonic's tribute to the 100th anniversary of the Statue of Liberty, which was televised live on ABC. [8] The orchestra, conducted by Mehta, performed in Central Park.

In 1987, Perlman joined the Israel Philharmonic Orchestra (IPO) for its concerts in Warsaw and Budapest as well as other cities in Eastern bloc countries. He toured with the IPO in the spring of 1990 for its first-ever performance in the Soviet Union, with concerts in Moscow and Leningrad, and again in 1994, performing in China and India.

In 2015, on a classical music program titled The Chamber Music Society of Lincoln Center produced by WQXR in New York City, it was revealed that Perlman performed the uncredited violin solo on the 1989 Billy Joel song " The Downeaster Alexa".

While primarily a solo artist, Perlman has performed with a number of other musicians, including Yo-Yo Ma, Pinchas Zukerman, Jessye Norman, Vladimir Ashkenazy, Isaac Stern, and Yuri Temirkanov at the 150th anniversary celebration of Tchaikovsky in Leningrad in December 1990.

As well as playing and recording the classical music for which he is best known, Perlman has also played jazz, including an album made with jazz pianist Oscar Peterson, and klezmer. He has been a soloist in a number of film scores, such as the theme of the 1993 film Schindler's List by John Williams, which won an Academy Award for Best Original Score. More recently, he was the violin soloist in the 2005 film Memoirs of a Geisha along with cellist Yo-Yo Ma. Perlman played selections from the musical scores of the movies nominated for "Best Original Score" at the 73rd Academy Awards with Ma and at the 78th Academy Awards.[ citation needed]

Perlman played at the state dinner attended by Queen Elizabeth II on May 7, 2007, in the East Room at the White House. [9]

He performed John Williams's " Air and Simple Gifts" at the 2009 inauguration ceremony for Barack Obama along with Ma (cello), Gabriela Montero (piano), and Anthony McGill (clarinet). The quartet played live, but the music played simultaneously over speakers and on television was a recording made two days earlier due to concerns that the cold weather could damage the instruments. Perlman was quoted as saying: "It would have been a disaster if we had done it any other way." [10]

He made an appearance in Disney's Fantasia 2000 to introduce the segment Pines of Rome, along with Steve Martin.

On November 2, 2018, Perlman reprised the 60th anniversary of his first appearance on The Ed Sullivan Show as a guest on The Late Show with Stephen Colbert. [11]

In 1975, Perlman accepted a faculty post at the Conservatory of Music at Brooklyn College. In 2003, he was named the Dorothy Richard Starling Foundation Chair in Violin Studies at the Juilliard School, succeeding his teacher, Dorothy DeLay. He also teaches students one-on-one at the Perlman Music Program on Long Island, NY, rarely holding master classes.

The Perlman Music Program, founded in 1994 by Perlman's wife, Toby Perlman, and Suki Sandler, started as a summer camp for exceptional string musicians between the ages of 12 and 18. [12] Over time, it expanded to a yearlong program. Students have the chance to have Perlman coach them before they play at venues such as the Sutton Place Synagogue and public schools. [13] By introducing students to each other and requiring them to practice together, the program strives to have musicians who would otherwise practice alone develop a network of friends and colleagues. Rather than remain isolated, participants in the program find an area where they belong. [14]

At the beginning of the new millennium, Perlman began to conduct. [15] He took the post of principal guest conductor at the Detroit Symphony Orchestra. He served as music advisor to the Saint Louis Symphony Orchestra from 2002 to 2004. In November 2007, the Westchester Philharmonic announced his appointment as artistic director and principal conductor. His first concert in these roles was on October 11, 2008, in an all- Beethoven program featuring pianist Leon Fleisher performing the Emperor Concerto. 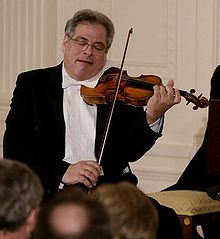 Perlman at the White House in 2007

Perlman plays the Soil Stradivarius violin of 1714, formerly owned by Yehudi Menuhin and considered one of the finest violins made during Stradivari's "golden period." Perlman also plays the Guarneri del Gesù 1743 'Sauret' [16] and the Carlo Bergonzi 1740 'ex-Kreisler'.

Perlman lives in New York City with his wife, Toby, also a classically trained violinist. They have five children, including Navah Perlman, a concert pianist and chamber musician. Perlman is a distant cousin of the Canadian comic and television personality Howie Mandel. [17] He has synesthesia and was interviewed for Tasting the Universe by Maureen Seaberg, which is about the condition. [18]