From Wikipedia, the free encyclopedia
(Redirected from Irish in New York City) 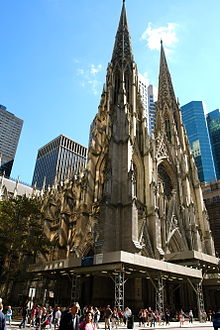 The Irish community is one of New York City's major and important ethnic groups, and has been a significant proportion of the city's population since the waves of immigration in the late 19th century.

As a result of the Great Famine in Ireland, many Irish families were forced to emigrate from the country. By 1854, between 1.5 and 2 million Irish had left their country. In the United States, most Irish became city-dwellers. With little money, many had to settle in the cities that the ships landed in. By 1850, the Irish made up a quarter of the population in Boston, New York City, Philadelphia, Buffalo, and Baltimore.

Today, Boston has the largest percentage of Irish-Americans of any city in the United States, while New York City has the most Irish Americans in raw numbers. [1] During the Celtic Tiger years, when the Irish economy was booming, the city saw a buying spree of residences by native Irish as second homes [2] or as investment property. [3]

Irish Americans (most of whom are Irish Catholic) make up approximately 5.3% of New York City's population, composing the second largest non-Hispanic white ethnic group. [4] Irish American Protestants first came to America in colonial years (pre-1776).The largest wave of Catholic Irish immigration came after the Great Famine in 1845. [5] Most came from some of Ireland's most populous counties, such as Cork, Galway, and Tipperary. Large numbers also originated in counties Cavan, Meath, Dublin, and Laois. [6]

In the Civil War, the massive anti-draft riots of 1863 represented a "civil war" inside the Irish Catholic community, according to Toby Joyce. The mostly Irish Catholic rioters confronted police, soldiers, and pro-war politicians who were often leaders of the Irish community. [7] In the "early days", the 19th century, the Irish formed a predominant part of the European immigrant population of New York City, a "city of immigrants", which added to the city's diversity to this day. [8] After they came, Irish immigrants often crowded into subdivided homes, only meant for one family, and cellars, attics, and alleys all became home for the poorest immigrants. As they accumulated wealth they moved into better housing. [9] Bay Ridge, Brooklyn, was originally developed as a resort for wealthy Manhattanites in 1879, but instead became an upscale family-oriented Italian- and Irish-American community. [10] Another large Irish-American community is located in Woodlawn Heights, Bronx, [11] but Woodlawn Heights also has a mix of different ethnic groups. [12] Conditions were slow to improve in Manhattan's Hell's Kitchen. [13]

Other sizable Irish-American communities include Belle Harbor and Breezy Point, both in Queens. [14] [15] Two big Irish communities are Marine Park and neighboring Gerritsen Beach. The Irish have also settled "to a far lesser extent [in] Maspeth, Woodside, and Sunnyside, Queens." [11]

The Irish Catholic men were successful in joining the New York City Police Department as well as the New York Fire Department. Religious women became nuns teaching in parochial schools; others became public school teachers. In the neighborhoods, the Irish organized to again control over territory, jobs, and political organizations. As the "new immigrants" from Southern and Eastern Europe arrived 1880s-1914, the Irish incorporating them into their established system. It was a process of "Americanization." The Irish dominated the Catholic Church as bishops, priests, pastors and nuns. [16] The Church worked hard to keep Catholicism strong among the new arrivals, opening parish schools and high schools. [17] After 1945, a large-scale movement to the suburbs was made possible by the steady upward social mobility of the Irish. [18]

Irish Bishops of the Archdiocese of New York

Irish Bishops of the Diocese of Brooklyn

See also: List of identities in The Gangs of New York (book)

Fairytale of New York by Irish band The Pogues refers to the NYPD choir singing Galway Bay. This is traditional because the force traditionally was largely made up of Irish Americans.