Because of suburban sprawl, it is estimated that more than two million people use the highway each day, making it the one of the busiest interstates in the Atlanta metropolitan area, and one of the most heavily traveled roadways in the United States. During rush hour, portions of the highway slow, sometimes to a crawl.

I-285 is eight to twelve lanes wide, with the northern part from I-75 to SR 400 to I-85 the most heavily traveled. One segment of the highway near Spaghetti Junction (a large, flyover highway interchange northeast of Atlanta) with I-85 widens to eighteen lanes, including collector-distributor lanes. Exits are numbered clockwise, starting at the southwesternmost point at I-85, and ending just east of there where it meets I-85 again near Hartsfield–Jackson Atlanta International Airport.

Between I-85 and I-20 in southwest Fulton County, I-285 is designated as the Bob A. Holmes Freeway, where I-285 heads north, and has an interchange with the Langford Parkway. Between I-20 in northwest Atlanta and I-75 near Cumberland Mall, it is designated as the James E. 'Billy' McKinney Highway as it continues north, and starts to curve to the east just west of the I-75 interchange.

The northern portion of I-285, east of the Cobb Cloverleaf (I-75 interchange) to Spaghetti Junction (I-85 interchange), is frequently referred to as the Top End Perimeter. This section, which includes an interchange with SR 400 at exit 27 (frequently cited as the most dangerous intersections in Atlanta), is one of the busiest freeways in the United States, handling about 250,000 cars per day and crossing through Cobb, Fulton and DeKalb counties, with several interchanges ( SR 141, SR 13, and I-85) bringing additional traffic to and from Gwinnett County. Through that stretch, the freeway expands from six or eight lanes to between ten and fourteen lanes.

While I-285 does not travel through Gwinnett County, the highway travels very close to the DeKalb–Gwinnett county line [3] and many major highways in Gwinnett County connect to I-285, with some prominent ones being US 78, I-85, and SR 141. Major Gwinnett cities near I-285 are Peachtree Corners and Norcross.

Much of Atlanta's high-end commercial real estate has developed along I-285, particularly at the northwestern I-75 and the SR 400 interchanges. Notable buildings include the 35-story King and Queen towers in the Perimeter Center business district and the Cobb Galleria complex in the Cumberland/Galleria area.

A portion of the section between I-75 and I-85 on the south side of I-285 has been bridged with a new runway and taxiway of Hartsfield–Jackson Atlanta International Airport, one of only two interstates in the nation (along with I-564 in Norfolk, VA) to have an underpass beneath a runway (underpasses for taxiways do occur elsewhere). Computer animations were developed prior to construction to simulate a jumbo jet touching down on the runway from a driver's perspective. The entire highway within the tunnels is outfitted with stopped-vehicle sensors and fire detectors. Two electronic signs on either side of the tunnels can warn drivers if the tunnel is closed in an emergency. For 1.21 miles (1.95 km) in the southwest corner, I-85 occupies the median of I-285, yet the roadways remain separate. [1]

Heavy trucks traveling through (but not into) Atlanta are required to bypass the city on I-285, as there is a well-signed and heavily enforced ban on through truck traffic along I-75, I-85, I-20, SR 400, and many other major Atlanta thoroughfares. As with highways just outside I-285, trucks are also prohibited from the far-left one or two lanes (except where there are left exits open to trucks).

The complete circumference of I-285 is covered by Georgia NaviGAtor, Georgia's intelligent transportation system (ITS). There have been 153 CCTV traffic cameras, 26 electronic message signs, and traffic-detection sensors installed in phases between 1999 and 2010 by Georgia DOT. Additionally, ramp meters are present at nearly all entrance ramps onto I-285, with the exception of the southeast section of I-285 and the major freeway-to-freeway connection ramps.

To many residents of Atlanta, the Perimeter defines a useful boundary to separate metro Atlanta's core from its surrounding suburbs. People distinguish a location as being inside or outside the Perimeter, sometimes abbreviated as ITP and OTP, a recent local neologism. [4] This was also the rough boundary chosen by BellSouth for separating landline telephone exchanges in suburban area code 770 from the existing area code 404 in 1995. [5] Generally, 404 is Atlanta itself and most suburbs inside the Perimeter, while 770 serves most of the suburbs outside the Perimeter.

The entire length of I-285 is part of the National Highway System, a system of routes determined to be the most important for the nation's economy, mobility, and defense. [6] 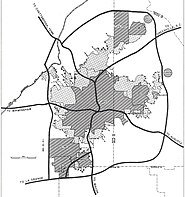 I-285 was completed and opened in sections, with the entire highway officially opened on October 15, 1969 at a cost of $90 million, as a four-lane freeway throughout (two lanes each way).[ citation needed]

The reconstruction of I-285, particularly on the top-end and the Spaghetti Junction reconfiguration (covered by the revive285 project), has cost about $355 million.[ citation needed]

Until 2000, the state of Georgia used the sequential interchange numbering system on all of its Interstate highways. The first exit on each highway began with the number "1" and increase numerically with each exit. In 2000, the Georgia Department of Transportation switched to a mileage-based exit system, in which the exit number corresponded to the nearest milepost. [7] [8]

Georgia DOT voted in September 2012 to raise the speed limit from 55 to 65 miles per hour (90 to 105 km/h) on the entire freeway, and by 2013 to install electronic signs for variable speed limits north of I-20, to lower the speed limit when traffic or weather conditions warrant. This is intended to keep traffic moving at a reduced but steady speed, rather than suddenly braking drivers causing traffic to " clot" simply because other drivers are also braking (which causes unnecessary stop-and-go traffic). [9]

Since the 1970s, the Georgia Department of Transportation has planned an outer loop, which would be a roughly 230-mile-long (370 km) circumferential loop around metropolitan Atlanta. Under Governor Sonny Perdue, the plans were dropped from the Regional Transportation Plan, in favor of the expansion of the rural state road network outside of Atlanta. The state will instead widen portions of state route 20 in north metro Atlanta, along a similar alignment to the Northern Arc. [11]

Georgia DOT broke ground in November 2017 on major improvements to the I-285 / SR 400 interchange. The project includes collector/distributor roads along I-285 and SR 400, the addition of a diverging diamond interchange at SR 400 and Abernathy Road, and new flyover ramps. [12] The project has total costs of $800 million and construction is expected to be complete in late 2020. [13][ needs update]

In January 2016, governor Nathan Deal announced the major mobility investment program (MMIP), a collection of mega projects planned around the state. The program includes the addition of express lanes on I-285 from I-20 / exit 10 across the north end of Atlanta to I-20 / exit 46. The program also includes reconstructing the interchanges with I-20. [14]

On July 31, 2012, metro-area voters rejected the T- SPLOST comprehensive transportation plan that was to be funded by an additional one-percent sales tax over a ten-year period. Among the projects included in the plan was a new exit on I-285 at Greenbriar Parkway on the southwest side of Atlanta (between present exits 2 & 5), as well as major reconstruction of interchanges at exits 27 ( US 19/SR 400), 10 (I-20 west of Atlanta) and 33 (I-85 northeast of Atlanta). [19] [20]

The following exits are listed clockwise from the southwest: going south to north, west to east, north to south and east to west. An exception is that heading counter-clockwise, exit 33 comes before exit 34.

Atlanta Braves pitcher Pascual Pérez became widely associated with I-285 after he got lost on it while trying to drive to a game. On August 19, 1982, Pérez, who had just received his first U.S. driver's license, decided to drive himself to Atlanta–Fulton County Stadium (where the Braves played their home games at the time), where he was scheduled to start that evening's game against the Montreal Expos. He was unable to find the proper exit and circled the city several times before running out of gas and calling for help. When Pérez failed to arrive at the stadium by game time, the Braves called upon veteran pitcher Phil Niekro to make the emergency start. The Braves, who had been mired in a 2–19 slump, won the game, [23] kicking off a 13–2 winning streak that carried the team to the National League West division title. The team subsequently made for Pérez a warm-up jacket with the notation "I-285" in place of his uniform number. [24] The humor of the incident was credited for helping to improve the morale of the team and breaking the losing streak. [25]