From Wikipedia, the free encyclopedia
IBM's research and development division

IBM Research is the research and development division for IBM, an American multinational information technology company headquartered in Armonk, New York, with operations in over 170 countries. IBM Research is the largest industrial research organization in the world and has twelve labs on six continents. [1]

IBM employees have garnered six Nobel Prizes, six Turing Awards, 20 inductees into the U.S. National Inventors Hall of Fame, 19 National Medals of Technology, five National Medals of Science and three Kavli Prizes. [2] As of 2018, the company has generated more patents than any other business in each of 25 consecutive years, which is a record. [3]

The roots of today's IBM Research began with the 1945 opening of the Watson Scientific Computing Laboratory at Columbia University. [4] This was the first IBM laboratory devoted to pure science and later expanded into additional IBM Research locations in Westchester County, New York, starting in the 1950s, [5] [6] including the Thomas J. Watson Research Center in 1961. [5] [6]

Advances in nanotechnology include IBM in atoms, where a scanning tunneling microscope was used to arrange 35 individual xenon atoms on a substrate of chilled crystal of nickel to spell out the three letter company acronym. It was the first time atoms had been precisely positioned on a flat surface. [8]

In 2017, IBM invested $240 million to create the MIT–IBM Watson AI Lab. Headquartered in Cambridge, MA the Lab is a unique joint research venture in artificial intelligence established by IBM and MIT, which brings together researchers in academia and industry to advance AI that has a real world impact for business, academic and society. The Lab funds approximately 50 projects per year that are co-led by principal investigators from MIT and IBM Research, with results published regularly at top peer-reviewed journals and conferences. Projects range from computer vision, natural language processing and reinforcement learning, to devising new ways to ensure that AI systems are fair, reliable and secure. [33] 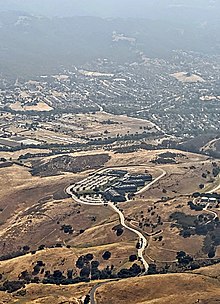 Almaden occupies part of a site owned by IBM at 650 Harry Road on nearly 700 acres (2.8 km2) of land in the hills above Silicon Valley. The site, built in 1985 for the research center, was chosen because of its close proximity to Stanford University, UC Santa Cruz, UC Berkeley and other collaborative academic institutions. Today, the research division is still the largest tenant of the site, but the majority of occupants work for other divisions of IBM.

IBM opened its first West Coast research center, the San Jose Research Laboratory in 1952, managed by Reynold B. Johnson. Among its first developments was the IBM 350, the first commercial moving head hard disk drive. Launched in 1956, this saw use in the IBM 305 RAMAC computer system. Subdivisions included the Advanced Systems Development Division. [35] Directors of the center include hard disc drive developer Jack Harker.

Prompted by a need for additional space, the center moved to its present Almaden location in 1986.

Scientists at IBM Almaden have contributed to several scientific discoveries such as the development of photoresists [36] and the quantum mirage effect. [37]

IBM Research – Australia is a research and development laboratory established by IBM Research in 2009 in Melbourne. [38] It is involved in social media, interactive content, healthcare analytics and services research, multimedia analytics, and genomics. The lab is headed by Vice President and Lab Director Joanna Batstone. [39] It was to be the company’s first laboratory combining research and development in a single organisation. [40]

The opening of the Melbourne lab in 2011 received an injection of $22 million in Australian Federal Government funding and an undisclosed amount provided by the State Government. [41]

IBM Research – Brazil is one of twelve research laboratories comprising IBM Research, [38] its first in South America. [42] It was established in June 2010, with locations in São Paulo and Rio de Janeiro. Research focuses on Industrial Technology and Science, Systems of Engagement and Insight, Social Data Analytics and Natural Resources Solutions.

The new lab, IBM's ninth at the time of opening and first in 12 years, underscores the growing importance of emerging markets and the globalization of innovation. [43] In collaboration with Brazil's government, it will help IBM to develop technology systems around natural resource development and large-scale events such as the 2016 Summer Olympics. [43]

Engineer and associate lab director Ulisses Mello explains that IBM has four priority areas in Brazil: "The main area is related to natural resources management, involving oil and gas, mining and agricultural sectors. The second is the social data analytics segment that comprises the analysis of data generated from social networking sites [such as Twitter or Facebook], which can be applied, for example, to financial analysis. The third strategic area is nanotechnology applied to the development of the smarter devices for the intermittent production industry. This technology can be applied to, for example, blood testing or recovering oil from existing fields. And the last one is smarter cities." [44]

The IBM Research – Tokyo, which was called IBM Tokyo Research Laboratory (TRL) before January 2009, is one of IBM's twelve major worldwide research laboratories. [45] It is a branch of IBM Research, and about 200 researchers work for TRL. [46] Established in 1982 as the Japan Science Institute (JSI) in Tokyo, it was renamed to IBM Tokyo Research Laboratory in 1986, and moved to Yamato in 1992 and back to Tokyo in 2012.

IBM Tokyo Research Laboratory was established in 1982 as the Japan Science Institute (JSI) in Sanbanchō, Tokyo. It was IBM's first research laboratory in Asia. [46] Hisashi Kobayashi was appointed the founding director of TRL in 1982; he served as director until 1986. [47] JSI was renamed to the IBM Tokyo Research Laboratory in 1986. In 1988, English-to-Japanese machine translation system called "System for Human-Assisted Language Translation" (SHALT) was developed at TRL. It was used to translate IBM manuals. [48]

TRL was shifted from downtown Tokyo to the suburbs to share a building with IBM Yamato Facility in Yamato, Kanagawa Prefecture in 1993. [49] In 1993, world record was accomplished for generation of continuous coherent Ultraviolet rays. In 1996, Java JIT compiler was developed at TRL, and it was released for major IBM platforms. Numerous other technological breakthroughs were made at TRL. [48]

The team led by Chieko Asakawa ( ja:浅川智恵子), IBM Fellow since 2009, provided basic technology for IBM's software programs for the visually handicapped, IBM Home Page Reader in 1997 and IBM aiBrowser ( ja:aiBrowser) in 2007. TRL moved back to Tokyo in 2012, this time at IBM Toyosu Facility.

TRL researchers are responsible for numerous breakthroughs in sciences and engineering. The researchers have presented multiple papers at international conferences, and published numerous papers in international journals. [50] [51] They have also contributed to the products and services of IBM, and patent filings. [50] [52] TRL conducts research in microdevices, system software, security and privacy, analytics and optimization, human computer interaction, embedded systems, and services sciences. [50]

In 1987, IBM Japan Science Prize was created to recognize researchers, who are not over 45 years old, working at Japanese universities or public research institutes. It is awarded in physics, chemistry, computer science, and electronics. [53]

IBM Research – Zurich (previously called IBM Zurich Research Laboratory, ZRL) is the European branch of IBM Research. It was opened in 1956 and is located in Rüschlikon, near Zurich, Switzerland.

In 1956, IBM opened their first European research laboratory in Adliswil, Switzerland, near Zurich. The lab moved to its own campus in neighboring Rüschlikon in 1962. The Zurich lab is staffed by a multicultural and interdisciplinary team of a few hundred permanent research staff members, graduate students and post-doctoral fellows, representing about 45 nationalities. Collocated with the lab is a Client Center (formerly the Industry Solutions Lab), an executive briefing facility demonstrating technology prototypes and solutions.

The Zurich lab is world-renowned for its scientific achievements—most notably Nobel Prizes in physics in 1986 and 1987 for the invention of the scanning tunneling microscope [54] and the discovery of high-temperature superconductivity, [55] respectively. Other key inventions include trellis modulation, which revolutionized data transmission over telephone lines; Token Ring, which became a standard for local area networks and a highly successful IBM product; the Secure Electronic Transaction (SET) standard used for highly secure payments; and the Java Card OpenPlatform (JCOP), a smart card operating system. Most recently the lab was involved in the development of SuperMUC, a supercomputer that is cooled using hot water.

The Zurich lab focus areas are future chip technologies; nanotechnology; fibre optics; supercomputing; data storage; security and privacy; risk and compliance; business optimization and transformation; server systems. The Zurich laboratory is involved in many joint projects with universities throughout Europe, in research programs established by the European Union and the Swiss government, and in cooperation agreements with research institutes of industrial partners. One of the lab's most high-profile projects is called DOME, which is based on developing an IT roadmap for the Square Kilometer Array.

The research projects pursued at the IBM Zurich lab are organized into three scientific and technical departments: Science & Technology, Cloud and Computing Infrastructure and Cognitive Computing and Industry Solutions. The lab is currently managed by Alessandro Curioni.

On 17 May 2011, IBM and the Swiss Federal Institute of Technology (ETH) Zurich opened the Binnig and Rohrer Nanotechnology Center, which is located on the same campus in Rüschlikon. [56]