The Hyde Park neighborhood of the city of Los Angeles, as mapped by the Los Angeles Times

Hyde Park is a neighborhood in the South region of Los Angeles, California. Formerly a separate city, it was consolidated with Los Angeles in 1923.

North is at the top of this map from the Los Angeles Times, August 20, 1916. A Santa Fe Railroad track runs northeast-southwest through Hyde Park. Southwest from Mesa Drive (now Crenshaw Boulevard) lies a paved boulevard (now Florence Avenue) to Redondo Beach. Manchester Avenue (now Boulevard) is at the bottom. The “Proposed Road” at the top (signaled by an arrow) and Mesa Drive are now part of Crenshaw Boulevard. The Baldwin Hills (mountain range) are at top left. 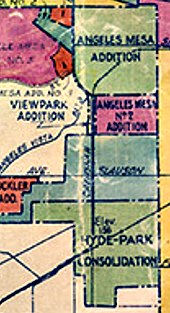 Three annexations of Angeles Mesa areas to Los Angeles are noted, at top, as is the small annexation of the View Park residential tract. The city of Hyde Park, which was consolidated with Los Angeles, is at the bottom of the map.

Hyde Park is one of the oldest neighborhoods in the city of Los Angeles. It was "laid out as a town" in 1887 [3] as a stop on the Atchison, Topeka and Santa Fe Railway's Harbor Subdivision, which ran from Downtown Los Angeles to the port at Wilmington in a westward loop. [4]

It was incorporated as a city in 1922 and had its own government. However, on May 17, 1923, its 1.2 square miles (3.1 km2) was consolidated with the larger city of Los Angeles after a favorable vote by Hyde Park residents. The city of Hyde Park was bordered by 60th Street on the north, Van Ness (now 8th Avenue) on the east, Florence Avenue on the south, and West Boulevard on the west. [5]

Hyde Park's street and other boundaries are: West Vernon Avenue on the north, South Van Ness Avenue on the east and the Los Angeles city boundary on the south and west. [6] [7]

Within the neighborhood, African Americans comprise 66% of the population, with Latinos at 27.2%, White 3%; Asian 1.2% and other 3.6%. Mexico and El Salvador were the most common places of birth for the 19.5% of the residents who were born abroad, considered a low percentage of foreign-born when compared with the city or county as a whole. [6]

The median household income in 2008 dollars was $39,460, considered average for both the city and county. The percentage of households earning $20,000 or less was high, compared to the county at large. The average household size of 2.8 people was also average. Renters occupied 53.3% of the housing units, and homeowners occupied the rest. [6]

The Van Ness Recreation Center is the only park in the Hyde Park neighborhood. It has an indoor gymnasium, auditorium, barbecue pits, outdoor basketball courts and a baseball diamond. [7]

Schools within the Hyde Park boundaries are: [7] [9]