From Wikipedia, the free encyclopedia
National university in Tokyo, Japan

Established in 1875 by Mori Arinori and evolved from Tokyo College of Commerce, Hitotsubashi has been consistently ranked amongst the top universities in Japanese university rankings and considered the best in economics and commerce related subjects in Japan. [2] [3] It was ranked 25th in the world in 2011 by Mines ParisTech: Professional Ranking of World Universities. [4]

The university's symbol is inspired by Mercury, Roman mythology's god of commerce. [5]

Arinori Mori, a founder of Hitotsubashi

When founded by Arinori Mori in 1875, Hitotsubashi was called the Institute for Business Training (商法講習所, Shōhō Kōshujo), where it nurtured businessmen to modernize Japan after the collapse of the feudal Tokugawa Shōgunate. The last Shogun Tokugawa Yoshinobu, prior to the end of his reign, sent Eiichi Shibusawa to Europe during the 1860s, where he learned of their advanced banking and economic system and brought it back to modernize Japan. The school expanded gradually with the support of Eiichi Shibusawa and Takashi Masuda and other influential individuals. Shibusawa is regarded as the father of the modern Japanese economy. Eiichi Shibusawa and Tokugawa Yoshinobu's son, Tokugawa Iesato worked together to established a number of large business enterprises, as well as academic institutions and other social service agencies which still active today, while Masuda was the founder of Mitsui & Co Shogun Tokugawa Yoshinobu was the head of the Hitotsubashi family, and that may well be why in 1949, the school adopted the name of Hitotsubashi University. [6] [7]

There were talks about a merger with The University of Tokyo, but alumni and students objected—the merger was not fulfilled. This is known as the "Shinyu Incident". [8] 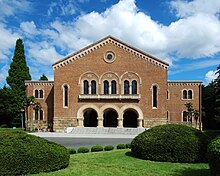 Kanematsu auditorium on the Kunitachi Campus

Hitotsubashi University has about 4,500 undergraduate and 2,100 postgraduate students with some 630 faculty members.

Parentheses show the numbers of admitted students per year. [9]

Library on the Kunitachi Campus

As of 2007, Hitotsubashi University had academic exchange agreements with 84 overseas universities and research institutions, including those between departments and departments, as follows: [15]

Hitotsubashi is a specialized institution only in social science, thus it is not as well known as other big universities such as University of Tokyo and Kyoto University. Although it has only social science departments and the place in the university rankings is always underrated, the reputation is very high. Consequently, its outstanding position in Japan can be seen in the several rankings below.

The university was ranked 7th out of 181 major universities in 2011 in the ranking called "Truly strong universities (本当に強い大学)" by Toyo Keizai. [22] In this ranking, Hitotsubashi is 1st in average graduate salary.

The Weekly Diamond reported that Hitotsubashi has the 4th highest research standard in Japan in research funding per researcher in COE Program. [24] In the same article, it is ranked seventh in quality of education by GP funds per student.

The economics department especially has a high research standard. According to the Asahi Shimbun, Hitotsubashi was ranked 4th in Japan in economic research during 2005–2009. [25] More recently, Repec in January 2011 ranked Hitotsubashi's Economic Department as Japan's 5th best economic research university. [26] Currently three researchers in Hitotsubashi are listed as top 10% economists in its world economist rankings. [27] Hitotsubashi has provided seven presidents of the Japanese Economic Association in its 42-year history; this number is the second largest. [28]

Asahi Shimbun summarized the number of academic papers in Japanese major legal journals by university, and Hitotsubashi was ranked 7th during 2005–2009.

Hitotsubashi alumni are distinctively successful in Japanese industries such as shown below.

According to the Weekly Economist 2010 rankings and the President's article on October 16, 2006, graduates from Hitotsubashi have the best employment rate in 400 major companies; the average graduate salary is the second best in Japan. [35] [36] Mines ParisTech : Professional Ranking World Universities ranks Hitotsubashi University as 25th in the world in 2011 in the number of alumni listed among CEOs in the 500 largest worldwide companies, although Hitotsubashi is small compared to other Japanese universities in the ranks. [4]

The university is ranked 8th in Japan for the number of alumni holding executive positions in the listed companies of Japan, and this number per student (probability of becoming an executive) is 2nd in Japan. [37] [38]

The university's alumni association is called Josuikai (如水会) and its main building (Josui Kaikan) is next to the building where Graduate School of International Corporate Strategy (ICS) is in Kanda, Tokyo.