From Wikipedia, the free encyclopedia
US National Park Service program

Congress envisioned that the NHPA would provide a funding source for states with matching funds to implement the act. The act was to be implemented through partnerships with states, Indian Tribes, Native Hawaiians, local governments, nonprofit organizations, and the private sector. It brought forth state programs to implement much of the act; a National Register of Historic Places encompassing a wide range of sites and structures deemed historic; partnerships at all levels of government; incentives; assistance; and reviews. The NHPA endorsed the use of federal financial support for the national preservation program [3] and called for two basic categories of assistance, both of which provide funding, rather than technical assistance, for historic preservation projects and to individuals for the preservation of properties listed in the National Register of Historic Places. Since enactment in 1966, repeated efforts to fund the HPF was realized after a 10-year campaign when consistent funding was authorized on September 28, 1976, through Public Law 94-422. [4] The law amended the National Historic Preservation Act to establish a funding source known as the Historic Preservation Fund for a historic preservation grant program to provide assistance to non-federal entities. [5]

The Historic Preservation Fund is not funded through tax revenue. Rather, it is funded by royalties accumulated by the Office of Natural Resources Revenue through payments, rentals, bonuses, fines, penalties, and other revenue from the leasing and production of natural resources from federal and Indian lands onshore and in the Outer Continental Shelf. [6] For example, in FY 2015, $9.87 billion in revenues were disbursed to seven funds: American Indian Tribes (8.6 percent), the Land and Water Conservation Fund (9 percent), Reclamation fund (14.1 percent), Historic Preservation Fund (1.5 percent or $150 million), State Share (18.6 percent), and the U.S. Treasury (48.1 percent). [7] The legislation dedicates an allowable amount to these special funds, but their actual appropriation depends upon the annual congressional appropriations process. As a result, though legislation authorizes that these revenues go toward these funds, their actual appropriation for these purposes has seldom, if ever, occurred.

The fully authorized amount of $150 million, to be drawn from federal oil and gas proceeds, has never been appropriated for the intended purposes. The fund has made disbursements every year as far back as 1991, documented in available charts, yet half of the amount has never been allocated or appropriated to the intended programs. Rather than allocating the full amount or royalty revenues to the seven funds, these revenues stay in the U.S. Treasury and are, in effect, used in a 'bookkeeping exercise" to achieve annual appropriations spending levels. [8] Over the years, the appropriated amount for the HPF has received over half of what has been authorized. 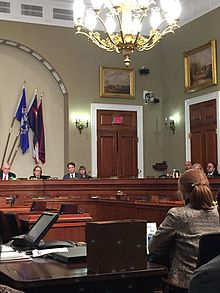 The Historic Preservation Fund has been reauthorized six times since establishment in 1976 for periods between five and ten years.

As part of NHPA, Section 101 implemented the designation of the State Historic Preservation Program. State Liaison Officers, which later became known as State Historic Preservation Officers (SHPOs), were established to manage historic preservation grants for the National Park Service. In the 1970s, these SHPOs experienced a growth in power as they became more organized, efficient and professional, and clarified their relationships with NPS. They also formed a National Conference of Historic Preservation Officers (NCSHPO) to represent them on a National level, particularly in Washington. The SHPO continued to gain an increasingly specific role, taking on the position of the advising consultant for the Section 106 review process. In 1980 with the amendment to the NHPA, the SHPO's exact duties were finally identified, defining its role, which remains today. [18]

State historic preservation officers are appointed by their respective Governors and are a key component of implementing the national historic preservation program. SHPOs manage the annual HPF appropriation to perform the federal preservation responsibilities required by the NHPA and match what they receive by at least 40 percent. As established by the 1966 act, SHPOs administer federal programs at the state and local levels and also administer their own state historic preservation programs. These programs help communities identify, evaluate, preserve, and revitalize their historic, archeological, and cultural resources. SHPOs also work with federal agencies, state and local governments, the public and educational and not-for-profit organizations to raise historic preservation awareness and to instill in Americans a sense of pride in their unique history. This awareness builds communities, encourages heritage tourism and increases economic development, all of which is best accomplished at the state and local level.

A Tribal Historic Preservation Officer (THPO) is a designated officer of a Native American Indian Tribe with responsibility for the administration of certain SHPO responsibilities, as authorized in 1992 pursuant to Section 101(d)(2), and listed in Section 101(b)(3) of the act for which the tribe has assumed by request to the Secretary of the Interior. A tribe submits its request to the National Park Service for processing which has administrative oversight of other NHPA programs as well. The THPO application process is detailed in a proposed rule, currently under final rule processing,[ when?] codified in the Code of Federal Regulations at 36 CFR 61.8. [20]

Other past and present programs funded by the HPF