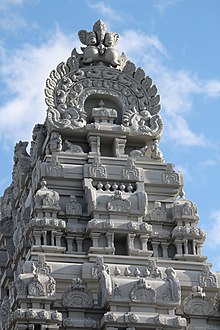 It is popularly referred to as the Ganesh Temple, Flushing since the main deity is Lord Ganesh. While there are now several Hindu temples in New York City area, this temple continues to be among the most prominent of them. The temple architecture and the rituals follow the South Indian tradition.

The temple is visited not only by the Hindus but also those who wish to explore religious diversity in Queens. [1] The very first Jain temple in the U.S., the Jain Center of America, is also located in Queens, in nearby Elmhurst.

The temple has a vegetarian restaurant termed the Temple Canteen in the basement [2] which is popular for its South Indian cuisine and for the temple experience. The canteen feeds 4,000 people a week, with as many as 10,000 during the Deepavali (Diwali) holiday. [3]

The Hindu Temple Society of North America was incorporated on January 26, 1970, and initially met in the living room of Alagappa Alagappan, one of the co-founders. [4] [5] It acquired from the Russian Orthodox Church a site on which the present Temple is situated. The present structure, designed in accordance with the Agama Sastras (scriptures relating to temple building), was completed in 1977, and the Temple was consecrated on July 4 of the same year. Sri La Sri Padrimalai Swamigal, from Madras, had prepared twenty-six yantras for the temple and done pujas for them for five years before installing them. It was reconsecrated in 2009. [6]

New York city's Indian population grew from about 6,000 in 1970 to more than 94,000 in 1990. Many of those came as part of the professionals who began arriving from India after American immigration rules were liberalized in 1965. [7] The Ganesh Temple was followed by the Hindu Temple and Cultural Society in Bridgewater, N.J. and Staten Island Hindu Temple. [8]

The temple includes a Pathsala (school) where children learn languages such as Hindi, Tamil, English and Sanskrit as well as Math, Science and Religion. Yoga and Meditation classes also offered. Construction of the Vedanta Library, Senior Citizen Center, and Staff Quarters has also been undertaken.

The temple is constructed using granite. It is entered through a gopuram gateway. The main shrine is dedicated to Lord Ganesha, while other shrines house idols of Lord Balaji, Goddess Mahalakshmi, Lord Hanuman and Sri Nagendra Swamy. Temple includes a dhvajastambha (column) and a rajagopuram (lofty tower). Sthapathi (temple architect) Muthiah had supervised the reconstruction.

In India, practically all temples are administered by trusts, which are set in place by the original builder or the original group, whereas in the United States, many of the churches are congregational.

At Hindu Temple Society of North America, a dispute arose in 2003 regarding the leadership of the temple. [9] The six plaintiffs acknowledged that they have no interest in changing the roles or rituals performed by the temple's 10 priests, (who have not taken sides). But they wanted the leadership to be elected. Dr. Uma Mysorekar, the temple's president, said the We want a system that prevails based on dedication and commitment, not based on popularity, she felt that the current system, in which the temple's unpaid 11-member board manages the temple's affairs and votes on its own members when their terms come up, is democratic enough. [10]

Dr. Mysorekar has been awarded the Kannada Rajyotsava Award from Karnataka, Ellis Island Medal of Honor, and the Governor's Award of Excellence. [11] As a representative of Hindus, she had been invited by three Presidents of the United States of America—Bill Clinton, George W. Bush and Barack Obama as well as Pope Benedict.

In September 1995, the Ganesha drinking milk miracle was observed at the temple. It was reported that "People held the spoon filled with milk under the trunk, by the mouth, and the milk would be taken up". [12]

Nearby temples in Flushing