Hawaiʻi Pacific University (HPU) is a private university in Honolulu and Kāneʻohe, Hawaiʻi. HPU is the largest private university in the central Pacific, most noted for its diverse student body of nearly 5,000 students, representing nearly 65 countries. The school's top academic programs are in Business Administration, Nursing, Biology, Diplomacy and Military Studies, and Social Work.

Oceanic Institute of HPU, an aquaculture research facility, is located at Makapuʻu Point. HPU is also present on military installations on the island of Oʻahu.

In September 1966, Honolulu Christian College established in 1949 merged into Hawaiʻi Pacific College, and a new charter was granted by the state of Hawaiʻi.

When President Meader retired on June 30, 1968, the Board of Trustees elected the Reverend George A. Warmer as Hawaiʻi Pacific's second President. Under President Warmer's leadership, the College implemented academic programs in the liberal arts and cooperative education.

In 1973, the College received full accreditation from the Western Association of Schools and Colleges. The following years saw the creation of the English Foundations Program, offering instruction to non-native speakers of English, and the Division of Special Programs, administering off-campus instruction on various military installations on Oʻahu.

In 1992, Hawaiʻi Loa College, a small, independent, liberal arts college located on the windward side of Oʻahu, merged into Hawaiʻi Pacific University.

In 2004, the HPU International Vocal Ensemble made their Carnegie Hall debut where they performed Morten Lauridsen's Lux Aeterna and O Magnum Mysterium.

In 2011, President Chatt G. Wright retired and Geoffrey Bannister, Ph.D., became HPU's fourth President on July 1. Born in the United Kingdom and raised in New Zealand, Bannister received his Ph.D. in Geography from the University of Toronto (Canada) and previously served as President of Butler University in Indianapolis, Indiana.

In January 2013, the Aloha Tower Development Corporation (ATDC) consented to the University's ownership and management of the Aloha Tower Marketplace. The approvals passed by ATDC were essential to Hawai'i Pacific's plan to move forward in redeveloping the Marketplace into a mixed-use property featuring outstanding student housing, retail and dining businesses and community gathering spaces.

HPU completed a merger to bring Oceanic Institute formally into the university in January 2014.

On July 1, 2016, John Yukio Gotanda, J.D., took office as Hawaiʻi Pacific University's fifth president. [4] Born and raised in Hawaiʻi President Gotanda returns home to lead HPU, following a successful 30-year career on the East Coast. He most recently served as the dean of Villanova University School of Law and earlier in his career practiced at law firms in Boston and D.C., and was an attorney for the US Court of Appeals. 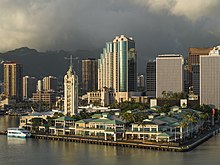 HPU's Aloha Tower Marketplace serves as an anchor for HPU in the downtown area. Aloha Tower Marketplace is a mixed-use facility that includes student housing, HPU's Welcome Center, Learning Commons, Lounge, Student Café, Student Fitness Center, ESports Arena, and a variety of restaurants, businesses, classrooms, and meeting rooms for university and community use. HPU's athletic department is centrally located in Honolulu's business district, and it is a few blocks' walk to the state capitol. HPU's College of Business, which is headquartered in Pioneer Plaza, includes computer based classrooms along with meeting spaces. In 2016, HPU opened its downtown INBRE (IDeA Networks of Biomedical Research Excellence) research labs, providing students with biomedical instrumentation and laboratory facilities. 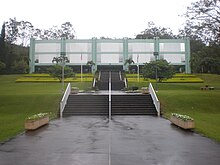 The Hawaii Loa campus, commonly referred to as HLC, is located eight miles away from the downtown campus, near Castle Junction in Kāneʻohe, on the windward side of the Koʻolau Range. HLC was originally built by Hawaiʻi Loa College, a liberal arts school that was merged into Hawaiʻi Pacific University in 1992. This campus houses the natural sciences, nursing, public health, and social work programs, however, other general courses are offered at HLC. The name "Hawaii Loa" refers to the Polynesian navigator, Hawaiʻiloa, who is credited in folklore with the discovery of the islands. [5]

The Oceanic Institute (OI) of HPU is a research facility focused on the advancement of sustainable aquaculture technologies. OI of HPU is located on a 56-acre site at Makapuʻu Point on the windward coast of Oʻahu. OI conducts research, education, and training that focuses on marine aquaculture, aquatic feeds and nutrition, and coastal resource management. In 2013, OI of HPU commissioned a teaching laboratory to complement classroom and conference space at OI of HPU's Ocean Learning Center (OLC). The OLC annex supports biotechnology research and education with two research labs, a teaching lab, and a distance learning center

Hawaiʻi Pacific University is made up of the following colleges: the College of Business, College of Liberal Arts, College of Health and Society, College of Natural and Computational Sciences, and the College of Professional Studies. HPU offers both undergraduate and graduate programs in each of its colleges and schools.

The university's athletic teams are called the Sharks. They compete in the Pacific West Conference as part of the National Collegiate Athletic Association's Division II. [13] Hawaiʻi Pacific University's first venture into intercollegiate athletics came with the formation of the men's basketball team. The university previously competed in the National Association of Intercollegiate Athletics before joining the NCAA in the mid-1990s.