From Wikipedia, the free encyclopedia
City in Missouri, United States

Hannibal is a city along the Mississippi River in Marion and Ralls counties in the U.S. state of Missouri. According to the 2020 U.S. Census, the population was 17,312, [4] making it the largest city in Marion County. The bulk of the city is in Marion County, with a tiny sliver in the south extending into Ralls County.

Developed for river traffic, today the city is tied to vehicle traffic, intersected by Interstate 72 and U.S. Routes 24, 36, and 61. It is across the river from East Hannibal, Illinois. Hannibal is approximately 100 miles (160 km) northwest of St. Louis (also bordering the Mississippi), 210 miles (340 km) east-northeast of Kansas City and 194 miles (312 km) miles east of Saint Joseph (both cities on the Missouri River), and approximately 100 miles (160 km) west of Springfield, Illinois.

Hannibal is not the county seat, but it has one of two county courthouses. There is also one in Palmyra, the county seat, which is located more centrally in the county. Hannibal is the principal city of the Hannibal, Missouri micropolitan area, which consists of both Marion and Ralls counties. 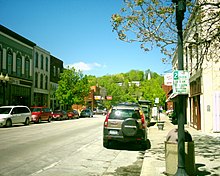 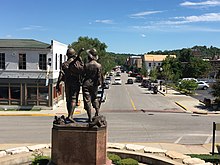 Tom Sawyer and Huck Finn at the Foot of Cardiff Hill (1926), by Frederick Hibbard

The site of Hannibal was originally inhabited by various cultures of indigenous Native American tribes.

The river community is best known as the mid-19th-century boyhood home of author Samuel Langhorne Clemens (aka Mark Twain, 1835-1910). Twain drew from his childhood settings for his novels The Adventures of Tom Sawyer (1876) and Adventures of Huckleberry Finn (1884). Numerous historical sites are associated with Mark Twain and the places depicted in his fiction.

Heritage tourism contributes to the Hannibal economy, as the city attracts both American and international tourists. The Mark Twain Boyhood Home & Museum marked its 100th anniversary in 2012; it has had visitors from all 50 states and some 60 countries. [5] Most Hannibal residents enjoy the visitors, and the town at large benefits from tourism revenue. [6]

After the United States acquired the Louisiana Territory west of the Mississippi in 1803, European-American settlers began to enter the area. Its early European settlements were established by ethnic French colonists, some from Illinois, who largely spoke French and were Roman Catholic in religion.

Hannibal was laid out in 1819 by Moses Bates [7] and named after Hannibal Creek (now known as Bear Creek). [8] The name is derived from Hannibal, a hero of ancient Carthage (now in Tunisia). [9]

The city grew slowly, with a population of 30 by 1830. But by 1846, Hannibal was Missouri's third-largest city when the Hannibal and St. Joseph Railroad was organized by John M. Clemens (Mark Twain's father) and associates. [10] This railway was built to connect to St. Joseph, Missouri in the west, then the state's second-largest city. This railroad was the westernmost line before the Transcontinental Railroad was constructed. It transported mail for delivery to the first outpost of the Pony Express.

Construction of railroads to the area and increased steamboats on the Mississippi River had stimulated growth. In 1843 the city had also annexed the town of South Hannibal. [11] Hannibal gained "city" status by 1845. [7] By 1850 it had 2,020 residents. [11]

In the late 19th and early 20th centuries, the city has served as a regional marketing center for livestock and grain, as well as other products produced locally, such as cement and shoes. [12] Cement for the Empire State Building (completed 1931) and Panama Canal was manufactured at the Atlas Portland Cement Company in the nearby unincorporated company town of Ilasco. [13]

The Mark Twain Memorial Lighthouse was constructed in 1933 as a public works project under President Franklin D. Roosevelt. It has been lit on ceremonial occasions at three separate times by Presidents Roosevelt, John F. Kennedy, and Bill Clinton. Rockcliffe Mansion, a private house on a knoll in Hannibal, is listed on the National Register of Historic Places.

In 2011, the Mark Twain Boyhood Home and Museum released Mark Twain: Words & Music, a CD featuring entertainers who recount Mark Twain's life in spoken word and song. Several songs were written especially for the project and refer to Hannibal, including "Huck Finn Blues" by Brad Paisley and "Run Mississippi" by Rhonda Vincent. Other artists include Jimmy Buffett as Huckleberry Finn, Clint Eastwood as Twain, and Garrison Keillor as the narrator of the project. [14] [15] 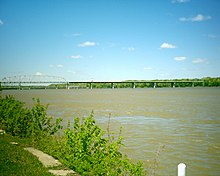 The Mississippi River at Hannibal

The Hannibal Micropolitan Statistical Area is composed of Marion and Ralls counties.

A thriving artist community has developed here because of its central location between the East and West coasts, and affordable and stable real estate prices. [22]

The Underwood Company built the General Mills plant here because its founder appreciated Mark Twain's writing and wanted to help his hometown. [23]

Because Hannibal is a Certified Local Government, residents, and business owners have access to federal and state tax credits, grants, and other funding sources. [25]

Tourism is a major part of Hannibal's economy, in large part because Samuel Clemens lived there as a boy and immortalized the town under his pen name, Mark Twain. The Mark Twain Boyhood Home & Museum and Mark Twain Cave are two of the city's major attractions. [26]

Hannibal has a Home Rule Charter form of government. Public services include police, fire, parks and recreation, public works, streets, inspections, tourism, library, and airport. There is a municipal court, and the Marion County Courthouse is located in Hannibal. A second county courthouse is located in the county seat in Palmyra.

The view from Lover's Leap of Hannibal and the Mississippi River

Hannibal High School was founded in 1896. This public high school is part of the Hannibal School District #60, with K-12 grades serving Hannibal and surrounding areas. It is located at 4500 McMasters Ave. 63401. [27]

Hannibal has a lending library, the Hannibal Free Public Library. [28]

The city is served by the Hannibal Courier-Post newspaper, printed daily on Tuesday through Saturday. KHQA is a television station licensed to Hannibal and located in Quincy, Illinois. Radio stations licensed to Hannibal include KGRC 92.9 FM, KHBL 96.9 FM, KHMO 1070 AM, and KJIR 91.7 FM.

Interstate 72 was extended into Hannibal in 2000 from Illinois across the Mark Twain Memorial Bridge. Interstate 72 extends west to the intersection with U.S. Route 61. Future plans call for extending Interstate 72 west along U.S. Route 36 to Cameron, Missouri. This will give Hannibal an east-west link connecting Kansas City to Springfield. The Chicago–Kansas City Expressway links Hannibal from Kansas City to Chicago, Illinois. U.S. Route 61 goes from St. Louis in the south to St. Paul, Minnesota; it is known as the Avenue of the Saints corridor.