From Wikipedia, the free encyclopedia
This article is about the city. For the river the city is named after, see Green River (Colorado River tributary).
City in Wyoming, United States

Green River is a city in and the county seat of Sweetwater County, Wyoming, United States, in the southwestern part of the state. [6] The population was 12,515 at the 2010 census.

The Union Pacific Railroad reached Green River on October 1, 1868 and was supposed to be the site of a division point for the railroad. Railroad officials were surprised to find that a town of 2000 residents and permanent adobe buildings had been established there, likely requiring costly negotiations for railroad land. They moved the division point 12 miles (19 km) west, creating the town of Bryan, on the Blacks Fork of the Green River. [7] Just when Green River was on the verge of becoming a ghost town, Blacks Fork dried up during a drought and the railroad was forced to move the division point back to Green River to ensure adequate water for its steam locomotives. Bryan became the ghost town.

On May 24, 1869, John Wesley Powell launched the Powell Geographic Expedition from Green River.

On November 16, 1931, the Town of Green River passed the Green River Ordinance that prohibited door-to-door selling. [8] Other towns across the country would adopt the ordinance.

There were 4,642 households, of which 39.0% had children under the age of 18 living with them, 59.4% were married couples living together, 7.9% had a female householder with no husband present, 6.0% had a male householder with no wife present, and 26.6% were non-families. 21.6% of all households were made up of individuals, and 5.7% had someone living alone who was 65 years of age or older. The average household size was 2.68 and the average family size was 3.12.

There were 4,177 households, out of which 42.5% had children under the age of 18 living with them, 64.4% were married couples living together, 8.4% had a female householder with no husband present, and 23.1% were non-families. 19.3% of all households were made up of individuals, and 6.0% had someone living alone who was 65 years of age or older. The average household size was 2.80 and the average family size was 3.22.

The Green River Basin contains the world's largest known deposit of trona ore. Soda ash mining from trona veins 900 and 1,600 feet (490 m) deep is a major industrial activity in the area, employing over 2000 persons at five mines. The mining operation is less expensive for production of soda ash in the United States than the synthetic Solvay process, which predominates in the rest of the world. The trona in Sweetwater County was created by an ancient body of water known as Lake Gosiute. Over time, the lake shrank. With the loss of outflows, highly alkaline water (salt brine) began to evaporate, depositing the beds of trona. [13]

The four mines are run by these companies:

The Green River Basin also has large oil shale and natural gas reserves, which remain virtually untouched due to the high cost of extracting the oil from the hard shale formations. However, an increase in oil prices in 2008 and a national desire to become more energy independent led to an increase in well drilling and oil exploration. Expansion growth from Halliburton and Exxon, as well as other oil companies, created a mini-boom for Green River and its sister city, Rock Springs.[ citation needed]

The 80MW Sweetwater Solar project near Green River is "the first utility-scale solar farm" in Wyoming. It is slated to come online in 2019. [14] [15] [16] Concerns have been raised about its impact on antelope migration. [17] 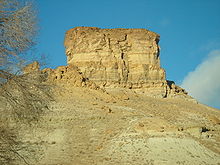 Green River's government consists of a six-member city council, each of whom are elected from one of three wards. Each ward elects two members. The mayor is elected in a citywide vote. The city council was criticized in 2007 for its handling of a smoking ban, which caused several residents to question the council's motives. [19]

The Mayor of Green River is Pete Rust, who was elected in November 2014.

Western Wyoming Community College is located in nearby Rock Springs and maintains an extension center in Green River.

Green River has a public library, a branch of the Sweetwater County Library System. [20]