The Greek Orthodox Archdiocese of America, headquartered in New York City, is an eparchy of the Ecumenical Patriarchate of Constantinople. Its current primate is Archbishop Elpidophoros of America. [1] [4]

On May 11, 2019, the church's Holy and Sacred Synod unanimously elected Metropolitan Elpidophoros of Bursa as the new archbishop of America following the voluntary resignation of Archbishop Demetrios. [4] In addition to serving as Metropolitan of Bursa, Elpidophoros has also served as Abbot of the Holy Monastery of the Holy Trinity in Halki and Professor of the Theological School of the Aristoteleian University of Thessaloniki. [4] Metropolitan Methodios of Boston served as the locum tenens until Elpidophoros was enthroned on June 22, 2019. [5] [1]

As of 2019 [update] Archbishop Elpidophros serves the Greek Orthodox Archdiocese of America. He serves as:

The Greek Orthodox Church in America considers that it sanctifies the faithful through divine worship, especially the Holy Eucharist and other sacraments, building the spiritual and ethical life of the faithful in accordance with the Holy Scriptures, Sacred Tradition, the doctrines and canons of the Ecumenical and local Councils, the canons of the Holy Apostles and the Fathers of the Church and of all other Councils recognized by the Orthodox Church.

The archdiocese states that it serves as a beacon, carrier, and witness of the message of Christ to all persons who live in the United States of America, through divine worship, preaching, teaching, and living of the Orthodox Christian faith. [8]

Before the establishment of a Greek Archdiocese in the Western Hemisphere there were numerous communities of Greek Orthodox Christians. [9] On June 26, 1768, the first Greek colonists landed at St. Augustine, Florida, the oldest city in America. [10] The first Greek Orthodox community in the Americas was founded in 1864, in New Orleans, Louisiana, by a small colony of Greek merchants. [11] [12] The first permanent community was founded in New York City in 1892, [9] today's Archdiocesan Cathedral of the Holy Trinity and the See of the Archbishop of America. The Greek Orthodox Archdiocese of North and South America was incorporated in 1921 [13] and officially recognized by the State of New York in 1922.

In 1908, the Church of Greece received authority over the Greek Orthodox congregation of America, [9] but in 1922 Patriarch Meletius IV of Constantinople transferred the archdiocese back to the jurisdiction of the Church of Constantinople. [13] In 1996, the archdiocese was split by the Ecumenical Patriarchate, into four parts: Greek Orthodox Archdiocese of Canada, Central America, South America and the America which was left with the territory of the United States of America.

By 2019, there were rumors, that the Greek Orthodox Archdiocese of America was suffering financially and was now in "financial, administrative, and spiritual bankruptcy." [14]

The Holy Eparchial Synod of the archdiocese is composed of:

The Greek Orthodox Archdiocese of America is composed of an archdiocesan district (New York City) and eight metropolises (formerly dioceses): New Jersey, Chicago, Atlanta, Detroit, San Francisco, Pittsburgh, Boston and Denver. [15] It is governed by the archbishop and the Eparchial Synod of Metropolitans. The synod is headed by the archbishop (as the first among equals) and comprises the metropolitans who oversee the ministry and operations of their respective metropolises. It has all the authority and responsibility which the Church canons provide for a provincial synod. [16]

There are more than 500 parishes, 800 priests and approximately 440,000 to 2 million faithful in the Greek Orthodox Archdiocese of America, depending on the source of reports and the counting method being used. [17] The number of parishes in the Greek Archdiocese rose by about 9% in the decade from 1990 to 2000, and membership growth has largely been in terms of existing members having children. [18] Membership is concentrated in the Northeastern United States. The states with the highest rates of adherence are Massachusetts, New Hampshire, Rhode Island, and New York. [19] However, there are also large numbers of members in Florida and California.

The archdiocese receives within its ranks and under its spiritual aegis and pastoral care Orthodox Christians, who either as individuals or as organized groups in the Metropolises and Parishes have voluntarily come to it and which acknowledge the ecclesiastical and canonical jurisdiction of the Ecumenical Patriarchate. [20]

The archdiocese also includes 21 monastic communities, 17 of which were founded by Elder Ephraim (former abbot of Philotheou monastery). The largest of these is St. Anthony's Greek Orthodox Monastery in Florence, Arizona.

Additionally, one seminary is operated by the Greek Archdiocese, Holy Cross Greek Orthodox School of Theology in Brookline, Massachusetts, which educates not only Greek Archdiocese seminarians but also those from other jurisdictions, as well.

The Greek Orthodox Archdiocese of America was a member of SCOBA and is a member of its successor organization, the Assembly of Canonical Orthodox Bishops of the United States of America. Due to the order of the Diptychs, the Greek Archbishop of America serves as the Chairman of the Assembly.

The Greek Orthodox Archdiocese comprises some 525 parishes and 20 monasteries across the United States of America. [3] The Greek Orthodox Archdiocese has one seminary school under its jurisdiction. This school is called Holy Cross. The seminary is located in Brookline, Massachusetts and in 2012 celebrated its 75th anniversary as a school of theology. The campus is also home to the only accredited Greek Orthodox undergraduate college in America, Hellenic College. These two schools are situated on the highest geographical point adjacent to Boston, known as the "Holy Hill".

(This is the actual hierarchical seniority order and formal listing of the bishops.)

Office of the Archbishop

The Office of the Archbishop responds to the demands associated with the overall duties of the archbishop. Tasks include: scheduling of the archbishop's pastoral visitations, official and unofficial meetings with clergy and laity, public and official appearances, audiences, conferences and travels. In addition, the Office processes all forms of communication addressed to the archbishop.

Office of the Chancellor

The Office of the Chancellor is concerned with the well-being of the clergy, their ongoing assignments and reassignments, their continuing education, and the benefits provided to them by the Church. Recent chancellor of the Archdiocese Bishop Andonios of Phasiane submitted his letter of resignation in May 2019. [22]

Information about different institutions throughout the United States which are part of the Greek Orthodox Archdiocese of America. 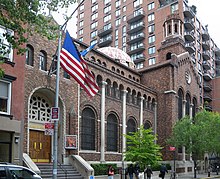 Saint Basil Academy is the Greek Orthodox Archdiocese home away from home for children in need. Serving as a philanthropic center of the Church, the purpose of the Academy is to provide a loving Christian environment, where resident children are nurtured into adulthood. Although children are brought to the Academy for various reasons, the common thread of all the resident children is the inability of a parent of guardian to sufficiently care for them.[ citation needed]

Saint Michael's Home is a New York State Department of Social Services-certified residential adult care facility of the Greek Orthodox Archdiocese of America. The programs and services of St. Michael's Home are specifically designed for senior individuals who seek assisted living in a Greek Orthodox environment.

The St. Photios National Shrine is the only Greek Orthodox National Shrine in the country. It is primarily a religious institution and is located in America’s oldest city, St. Augustine, Florida. The purpose of the Shrine is two-fold. First, it honors the memory of the first colony of Greeks in the New World and the succeeding generations of Greek immigrants (protopori). Secondly, it serves to preserve, enhance and promote the ethnic and cultural traditions of Greek heritage and the teachings of the Greek Orthodox Church in America. Over 100,000 people visit the Shrine each year.[ citation needed]

The Hellenic Cultural Center of the Greek Orthodox Archdiocese of America was established in 1986 with the goal of cultivating the rich Orthodox heritage and the Hellenic customs, culture and traditions within the Greek-American community.

The National Sisterhood of Presvyteres, formally established in 1982, consists of all the Presvytéres (i.e. the wives of married priests) of the Greek Orthodox Archdiocese of America. The purpose of the Sisterhood is to promote the spirit of Christian love among the Presvyteres by giving them opportunities to get acquainted with one another. This is accomplished with retreats, meetings, social gatherings and newsletters which help the Presvyteres develop a unique bond. The Sisterhood National Board meets annually, whereas, the general membership convenes every two years at the Clergy-Laity Congress.[ citation needed]