From Wikipedia, the free encyclopedia
"Greater KL" redirects here. For the integrated development project within the metropolitan area, see KL Metropolis.
Not to be confused with Klang Valley.
Metropolitan area in Malaysia

Greater Kuala Lumpur is the geographical term that determines the boundaries of Metropolitan Kuala Lumpur in Malaysia. Though similar to the term " Klang Valley", there remains a variation between the two. It is similar to Greater London and Greater Toronto. The metropolitan area covers 5,194.72 square km of land.

Before 1974, when Kuala Lumpur was still part of Selangor, there was once a greater Kuala Lumpur district covering what is today the Federal Territory of Kuala Lumpur, Ampang, Batu Caves, Gombak, Ulu Klang, Petaling Jaya, Puchong and Sungai Buloh. [1] [2] 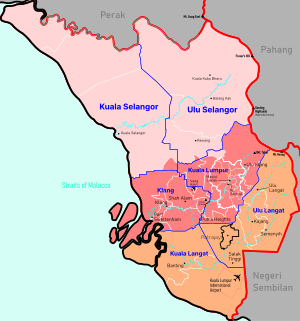 Greater Kuala Lumpur is conterminous to the National Growth Conurbation, which spans the Klang Valley, western Negeri Sembilan to the south, and the topographically mountainous western frontier of Pahang to the east. It is defined as an area covered by 14 municipalities surrounding Kuala Lumpur, each governed by local authorities: [3] [4] [5] [6]

1. The Klang Valley ( Selangor and the Federal Territories of Kuala Lumpur and Putrajaya)

Greater KL is a relatively new term as compared to the more prevalent and established Klang Valley term.

In 2010, the Greater KL population was estimated at close to seven million and it contributed about RM263 billion to the nation's Gross National Income (GNI). Kuala Lumpur ranks 79th out of 140 cities in the Economist Intelligence Unit's survey on liveability. 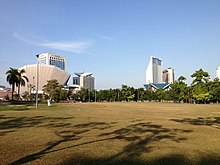