The gray-crowned rosy finch, or gray-crowned rosy-finch, (Leucosticte tephrocotis) is a species of passerine bird in the family Fringillidae native to Alaska, western Canada, and the north-western United States. Due to its remote and rocky alpine habitat it is rarely seen. There are currently six recognized subspecies. It is one of four species of rosy finches.

Six subspecies of the gray-crowned rosy finch are now recognized, though proposals for additional subspecies have been recognized. [7] 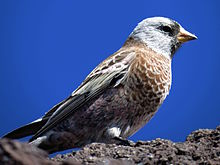 The ancestor of the three species of North American rosy finches migrated from Asia. [11] All rosy finches live in an alpine or tundra environment. The gray-crowned rosy finch has a wide range [12] and large numbers throughout Alaska, and western Canada and the United States. L. t. griseonucha permanently resides in the Aleutian Islands and umbrina on the Pribilof Islands. A small number of gray-crowned rosy finches winters on the mainland in South-Central Alaska and visits feeders there. The other taxa: littoralis, tephrocotis, wallowa, and dawsoni are found from the Canadian and American Rockies and migrate south to the western United States. [1] L. t. tephrocotis summers from Montana to the Yukon, while littoralis breeds closer to the coast, from northern California to west-central Alaska. [5] Due to its remote habitat, few of its nests have been found, it is rarely spotted, and the population is stable. [3] [9] They are invariably found amongst rocks. [9] The areas the subspecies breed in rarely overlap during breeding season. Males typically outnumber females throughout the year. [6] An individual was seen north of Boonville, in Lewis County, NY beginning on Sunday, March 4 through at least Thursday, March 8. This is only the second confirmed report for New York State. [13]

Rosy finches are very environment-specific. In the summer their breeding habitat is rocky islands and barren areas on mountains from Alaska to the northwestern United States. These mountain breeding areas tend to be snowfields and rocky scree. [9] When not breeding they form large flocks of over 1000 individuals which are sometimes known to include snow buntings (P. nivalis), Lapland longspurs (C. lapponicus), and horned larks (E. alpestris), as well as other rosy-finch species. [6] [9] They descend in flocks as far as the fringes of the western plains beginning in autumn when the snows get deep. They return to alpine regions when snow is still deep in early spring. [9] They may breed at a higher altitude than any other breeding bird in North America. [4] [9] Due to these extreme breeding altitudes, they are very difficult to observe during breeding times. [4] [9] They build a cup nest in mid-June at a sheltered, hidden location on the ground or on a cliff and are monogamous. [9] They are known to use protected areas such as mine shafts and abandoned buildings for nesting. [6] Both sexes collect the nesting material of grass, roots, lichen, moss, and sedge, but only the female builds the nest. Lining material consists of fine grass, hair, and feathers. The female lays 3–5 eggs which she incubates for approximately two weeks. Both sexes feed the chicks, which leave the nest after 2–3 weeks. Chicks continue to be fed by their parents for about two weeks after leaving the nest in late July or early August. [9] A male will defend its female's territory during breeding season, not just the nest but wherever she goes. This behavior is common with the rosy finches. [6] [14]

These birds forage on the ground; many fly to catch insects in flight. During the summer they mainly eat insects, such as cutworms, that were caught in updrafts and frozen in snowfields. They also feed in the meadows near snowfields. [6] In the winter they eat seeds from weeds and grasses such as Russian thistle (E. exaltatus), mustard, and sunflower (H. annuus). When breeding, both males and females develop throat pouches, known as gular pouches or gular skin, to carry food to their chicks, [9] [11] a trait seen in only one other North American genus, Pinicola. [15] The three subspecies that live in mountain interiors have brown cheeks instead of gray cheeks. They show little fear of humans. [3] [9] They often feed in small flocks. Their call is a buzz-sounding "chew". [16] They can be approached to within 1 to 2 m (3.3–6.6 ft). [4]