From Wikipedia, the free encyclopedia
Boulevard in the Bronx, New York

The Grand Concourse (also known as the Grand Boulevard and Concourse) is a 5.2-mile-long (8.4 km) thoroughfare in the borough of the Bronx in New York City. Grand Concourse runs through several neighborhoods, including Bedford Park, Concourse, Highbridge, Fordham, Mott Haven, Norwood and Tremont. For most of its length, the Concourse is 180 feet (55 m) wide, though portions of the Concourse are narrower.

The Grand Concourse was designed by Louis Aloys Risse, an immigrant from Saint-Avold, Lorraine, France. Risse first conceived of the road in 1890, and the Concourse was built between 1894 and 1909, with an additional extension in 1927. The development of the Concourse led to the construction of apartment buildings surrounding the boulevard, and by 1939 it was called "the Park Avenue of middle-class Bronx residents". [3] A period of decline followed in the 1960s and 1970s, when these residences became dilapidated and the Concourse was redesigned to be more motorist-friendly. Renovation and redevelopment started in the 1980s, and a portion of the Grand Concourse was reconstructed starting in the 2000s.

The southern portion of the Grand Concourse is surrounded by several historically important residential buildings, which were listed on the National Register of Historic Places in 1987 as part of the Grand Concourse Historic District. In 2011, the New York City Landmarks Preservation Commission designated numerous buildings around the Grand Concourse as part of a city landmark district. Additionally, several individual points of interest are located on or near the Concourse, including the Bronx Museum of the Arts and Edgar Allan Poe Cottage. 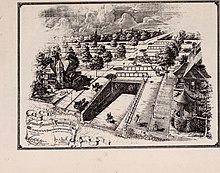 Risse first conceived of the road in 1890, as a means of connecting the borough of Manhattan to the northern Bronx. [6] Construction began on the Grand Concourse in 1894 and it was opened to traffic in November 1909. Built during the height of the City Beautiful movement, it was modeled on the Champs-Élysées in Paris but is considerably larger, stretching four miles (6 km) in length, measuring 180 feet (55 m) across, and separated into three roadways by tree-lined dividers, so some minor streets did not cross the Concourse. The cost of the project was $14 million (worth $456,008,000 today). [7]

The Grand Concourse originally stretched from Bronx Borough Hall at 161st Street north to Van Cortlandt Park. It was expanded southward to 138th Street in 1927 after Mott Avenue was widened to accommodate the boulevard. [8] [9] Evidence of the Grand Concourse extension's old name is present at the 149th Street–Grand Concourse station, where there are signs reading "Mott Avenue". [9]

The Interborough Rapid Transit Company's Jerome Avenue Line opened a few blocks west of the Grand Concourse in 1917, initiating a housing boom amongst upwardly mobile, predominantly Jewish and Italian, families who were fleeing the crowded tenements of Manhattan. In 1923, Yankee Stadium opened near the Grand Concourse at 161st Street, down the hill from the Concourse Plaza Hotel. South of Fordham Road, the palatial Loew's Paradise theater, one of the Loew's Wonder Theatres and at one time the largest movie theater in New York City, was constructed in 1929. [10]

Development of the Concourse was further encouraged by the opening of the Independent Subway System's Concourse Line in 1933. By the mid-1930s, almost three hundred apartment buildings had been built along the Concourse. Customarily five or six stories high with wide entrance courtyards bordered with grass and shrubs, among these apartments are many of the finest examples of Art Deco and Art Moderne architecture in the United States. Even though the Great Depression, which was happening at the time, ended the period of tremendous growth, privately financed apartment buildings continued to be constructed. Furthermore, work was done on the Grand Concourse as part of WPA programs. [11] During this period, the Bronx had more amenities than other boroughs: in 1934, almost 99% of residences had private bathrooms, and 95% had central heating. [12] In the 1939 WPA Guide to New York City, the Grand Concourse was described as "the Park Avenue of middle-class Bronx residents, and the lease to an apartment in one of its many large buildings is considered evidence of at least moderate business success." [3] [13]

The south and central Bronx rapidly deteriorated in the 1960s, as there was general disinvestment in the region's real estate, exacerbated by urban renewal and redlining programs. [15] [16] Many white residents of the South Bronx left for suburban areas in a process known as white flight; they were helped by the construction of the Interstate Highway System. [17] [18] At the same time, African Americans and Puerto Ricans were moving to the Bronx for blue-collar jobs; however, these jobs were increasingly being shifted to the suburbs, the Southern United States, and other countries. [15] [18] Racial discrimination against these demographic groups prevented them from moving to the suburbs, forcing them into deteriorating urban housing stock. [15] [19] The buildings around the Concourse thus came to be perceived as old and low-rent, and subsequent cycles of disinvestment led landlords on the Concourse to pay decreasingly less attention to their housing stock, [17] while banks and insurance companies failed to give financial support to these neighborhoods. [20] Further outward migration between 1968 and 1970 drained the areas along the Grand Concourse of most of its remaining middle-class residents. Many buildings in the area were damaged by arson, vandalism, and a lack of maintenance.

The road itself was modified to be more hospitable to motorists. [21] During the 1960s, the New York City Department of Parks and Recreation removed the grass median on the Concourse and replaced it with cement that was painted green. [22] By the 1980s, The New York Times characterized the Concourse as "a driver’s paradise". Traffic lights were timed so that motorists received a " green wave", moving through multiple intersections per light cycle. Meanwhile, pedestrian crossings and trees were eliminated, and green highway signs were placed on the Concourse. [23]

During the 1980s, landlords along the Concourse and elsewhere in the South Bronx began rehabilitating their buildings. [24] [25] The Bronx Museum of the Arts, was one of the institutions to move to the area, relocating in 1982 to a former synagogue at Grand Concourse and 167th Street. [24] The city created the "Special Grand Concourse Preservation District" in 1989 to preserve the character of residential buildings on the Concourse. [26] This led to new building developments on the Concourse starting in the 1990s, [27] including the Rafael Viñoly-designed Bronx Housing Courthouse at 1118 Grand Concourse. [24] In addition, basement stores started opening on the Concourse in the 1980s, serving the predominantly minority communities around the boulevard. By 2003, a New York Times writer observed that "every block between 161st Street and 196th Street now has a grocery, a barber shop, a travel agency or a medical clinic". [28]

Renovated intersection with 161st Street in 2008

By the early 1990s, politicians and community advocates strove to make the Concourse more usable for pedestrians. At that time, the Concourse was one of the most dangerous streets in New York City, with twelve pedestrians dying in 1991, rivaling the reputation of Queens Boulevard as the "Boulevard of Death". [23] In 1992, the New York City Department of Transportation (NYCDOT) conducted a study of the Grand Concourse, which resulted in improvements such as left-turn signals; pedestrian barriers; roadway markings; repainted crosswalks; and new and improved signage. These improvements continued along the entire corridor through 2006. [29]: 16–19  As an experiment, the NYCDOT also completely rebuilt the section between 161st Street and 167th Streets starting in 1999, as a "demonstration" project. [29]: 20–26  The Grand Concourse underwent an $18 million restoration and landscaping to widen and landscape the medians; improve lighting; add new signage; build pedestrian planters in the medians; and add bike lanes. This resulted in a 69% drop in accidents along this section between 1998 and 2005. [29]: 20–22  The final part of the demonstration project was completed in 2008. [30]

Following the success of the "demonstration" reconstruction, the NYCDOT unveiled a four-phase capital project between 161st Street and Fordham Road as part of a capital project, which would receive funding directly from the city. The demonstration project was the first phase of the capital project. A reconstruction of the Grand Concourse between 166th and 171st Street began in 2013 [31] and was finished in June 2017. [32] Funding is being allocated for a reconstruction of the Grand Concourse from 171st Street to 175th Street, which is already in planning. [33] In January 2017, the New York City Department of Transportation started planning for a fourth phase, which will renovate the section between 175th Street and Fordham Road. [32]

Because of its attractive art deco buildings and close proximity to Manhattan, the southern portion has been experiencing gentrification and is drawing many young professionals to the area. [34] Since the 2000s, the area around the Grand Concourse has been the center of what real state agents are calling a “renewal", with new residents moving in, and severe crime rates having decreased significantly. The New York Times cited several residents who believed that, while the region would experience demographic changes, it would be working-class, “community-oriented” people, as opposed to the richer individuals that have gentrified other neighborhoods of the city. [9] 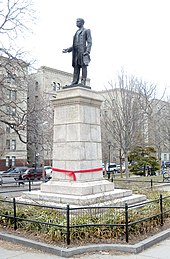 Several buildings of importance to New York City and the Bronx, both because of their history and their current use, are located along the Grand Concourse. [11] There are also numerous structures designated as New York City Landmarks (NYCL) and National Register of Historic Places (NRHP) on the Concourse. [2] [36] [37] From south to north (in increasing address order), they include: