From Wikipedia, the free encyclopedia
Government of city and county of San Francisco 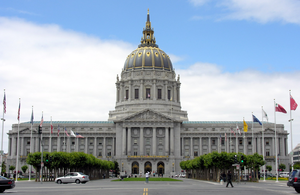 The government of the City and County of San Francisco utilizes the " strong mayor" form of mayoral/council government, composed of the Mayor, Board of Supervisors, several elected officers, and numerous other entities. It is the only consolidated city-county in California, and one of only thirteen charter counties of California. [1] The fiscal year 2019–20 city and county budget was approximately $12.3 billion. [2]

San Francisco utilizes the " strong mayor" form of mayoral/council government, composed of the mayor, Board of Supervisors, several elected officers, and numerous other entities. San Francisco voters use ranked-choice voting to elect the mayor, supervisors, and other elective officers. [3] 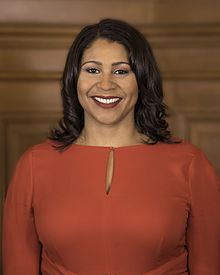 London Breed, the mayor of San Francisco as of 2019

The Mayor of San Francisco is the head of the executive branch of the city and county government. The mayor has the responsibility to enforce all city laws, administer and coordinate city departments and intergovernmental activities, set forth policies and agendas to the Board of Supervisors, and prepare and submit the city budget at the end of each fiscal year. The mayor has the powers to either approve or veto bills passed by the San Francisco Board of Supervisors, participate in meetings of the Board of Supervisors and its committees, appoint a replacement to fill vacancies in all city elected offices until elections, appoint a member of the Board as acting mayor in his/her absence, and to direct personnel in the case of emergency. [4] The mayor serves a four-year term and is limited to two successive terms. [4] If the mayor dies or resigns, the President of the Board of Supervisors assumes the office as acting mayor. This has occurred twice since the 1970s: Dianne Feinstein became acting mayor after the assassination of George Moscone in 1978, and London Breed became acting mayor following the death of Ed Lee from a heart attack in 2017.

The current mayor as of 2021 [update] is London Breed.

In addition, there are other citywide elected officers of San Francisco: [7]

Entities under the authority of the Board of Supervisors include the: [8] [9]

Entities under the authority of the San Francisco County Superior Court include the: [8]

Entities under the authority of the City Administrator include the: [8]

Independent and semi-independent entities include the: [8]

Other entities and programs include:[ citation needed]

San Francisco's municipal authority extends beyond city/county limits through its operation of the San Francisco International Airport and the vast tracts of land supporting the Hetch Hetchy Water System.

In the 1890s San Francisco received heavy ship traffic from Asian cities that were currently dealing with the bubonic plague. In 1889, a ship from Hong Kong was found to have two cases of bubonic plague on board. The bodies washed up on the bay later, but no immediate outbreak occurred at this initial finding. In 1900 a city health officer autopsied a Chinese man and found evidence of the plague. With anti-Chinese feelings already running rampant throughout the city, the Department of Public Health quickly moved to quarantine Chinatown. Initially the quarantine was protested, not to protect the Chinese, but because of fear and doubt that the plague was indeed in the city. The mayor at the time, James D. Phelan, created the Board of Health, which included multiple doctors on the board. He demanded the Board of Health have 100 physicians search a 12-block area in Chinatown for more cases of the plague. After victims were found, the Board of Health publicly announced the plague, and the Chinatown quarantine was again set into place. [23] [24]

Health officials shut down Chinese-owned businesses, and any Chinese or Japanese people attempting to leave the city had to first go through an inoculation with an experimental prophylactic developed by Waldemar Haffkine. This led to a court case between Chinatown resident Wong Wai and the Department of Public Health. Wai won the court case and the Department of Public Health was ordered to stop the inoculations, but city officials got support from the Board of Supervisors to continue. [25] Health authorities also attempted to set up a detention camp for those of Asian descent in Mission Rock, but the idea was protested and canceled, partially due to fear about openly admitting the plague in San Francisco. [24]

Fear of the plague and prejudice against Chinese was so high that many city officials debated burning down Chinatown. The idea popular, especially since this had been done in Honolulu. To prevent their homes from being burnt down and break the quarantine, the Chinese rallied the Chinese Six Companies, multiple attorneys, and China's diplomat. Together, they were ultimately able to get the quarantine lifted again. This was again in part due to the government's fear of publicly confirming plague. [25]

Health authorities from 21 states eventually passed a resolution about California's neglect of duties to address the plague in San Francisco and threatened to close all trade with California. San Francisco businessmen reacted by assembling the Chamber of Commerce, Board of Trade, Merchants’ Association, Marine Hospital Service, new mayor George C. Pardee and various and civil rights groups to clear San Francisco of the plague. [24]

Also notable are the independent police forces of the University of California, San Francisco and the Park Police of the Presidio Trust and the Golden Gate National Recreation Area.

The San Francisco Green Party, the county affiliate of the Green Party of California, elects a County Council of seven individuals every 2 years. [30]