From Wikipedia, the free encyclopedia
Corporate headquarters complex of Google
This article is about the headquarters of Google. For the large number, see Googolplex. For the abandoned Google initiative, see Plex (Google).

The Googleplex is the corporate headquarters complex of Google and its parent company, Alphabet Inc. It is located at 1600 Amphitheatre Parkway in Mountain View, California.

"Googleplex" is a portmanteau of Google and complex (meaning a complex of buildings) and a reference to googolplex, the name given to the large number 10(10100), or 10 googol.

Former entrance to the lobby of Building 40

The site was previously occupied by Silicon Graphics (SGI). The office space and corporate campus is located within a larger 26-acre (11-hectare) site that contains Charleston Park, a 5-acre (2-hectare) public park; improved access to Permanente Creek; and public roads that connect the corporate site to Shoreline Park and the Bay Trail. The project, launched in 1994, was built on the site of one of the few working farms in the area and was city owned at the time (identified as "Farmer's Field" in the planning documents). [1] [2] It was a creative collaboration between SGI, StUDIOS Architecture, SWA Group, and the Planning and Community Development Agency of the City of Mountain View.[ citation needed] The objective was to develop in complementary fashion the privately owned corporate headquarters and adjoining public greenspace. Key design decisions placed parking for nearly 2000 cars underground, enabling SWA to integrate the two open spaces with water features, shallow pools, fountains, pathways, and plazas. The project was completed in 1997. The ASLA noted that the SGI project was a significant departure from typical corporate campuses, challenging conventional thinking about private and public space and awarded the project the ASLA Centennial Medallion in 1999. [3]

Architecture was the architect for the original SGI campus and provided both interior architecture and base building design.

The former SGI facilities were leased by Google beginning in 2003. [4] A redesign of the interiors was completed by Clive Wilkinson Architects in 2005. In June 2006, Google purchased some of Silicon Graphics' properties, including the Googleplex, for $319 million. [5] [6]

A Google campus area down Charleston Road from the Googleplex

Since the buildings are of relatively low height, the complex sprawls out over a large area of land. The interior of the headquarters is furnished with items like shade lamps and giant rubber balls. The lobby contains a piano and a projection of current live Google search queries. Facilities include free laundry rooms (Buildings 40, 42 & CL3), two small swimming pools, multiple sand volleyball courts, and eighteen cafeterias with diverse menus. Google has also installed replicas of SpaceShipOne and a dinosaur skeleton. [7] [8]

Since 2007 the site has featured a series of solar panels covering the rooftops of eight buildings and two solar carports, and capable of producing 1.6 megawatts of electricity. At the time of installation, Google believed it to be the largest in the United States among corporations. The panels provide the power needed for 30% of the peak electricity demand in their solar-powered buildings. [9] 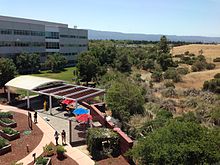 In 2013 construction began on a new 1.1-million-square-foot (100,000-square-meter) campus dubbed "Bay View", adjoining the original campus on 42 acres (17 ha) leased from the NASA Ames Research Center and overlooking San Francisco Bay at Moffett Federal Airfield. The estimated cost of the project was $120 million with a target opening date of 2015. [12] [13] [14]

NBBJ was the architect and this was the first time Google has designed its own buildings rather than moving into buildings occupied by previous businesses. [15]

The addition is off the northeast corner of the complex, by the Stevens Creek Nature Study Area/ Shoreline Park. Before announcing the construction, Google, through its in-house real estate firm, Planetary Ventures, sought permission from the city of Mountain View to build bridges over the adjacent Stevens Creek. [16] Google's 2012 year-end annual report noted it can develop only 7 acres (2.8 ha) of the 42-acre (17-hectare) site. [17]

Google planned in 2015 a 60-acre (24-hectare) addition designed by Heatherwick Studio and Bjarke Ingels in North Bayshore. [18] The site, however, was granted to LinkedIn by the city councilors and the Google project was revised in 2016, with 3 buildings to be built on 2 different sites east of Googleplex in Mountain View; one immediately next to Googleplex and the two smaller ones a few blocks away. [19] 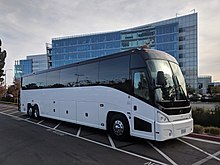 A Google shuttle bus at the Sunnyvale campus. 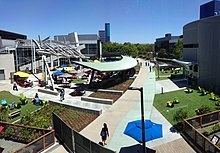 The Googleplex is located between Charleston Road, Amphitheatre Parkway, and Shoreline Boulevard in north Mountain View, California close to the Shoreline Park wetlands. Employees living in San Francisco, the East Bay, or South Bay may take a free Wi-Fi-enabled Google shuttle to and from work. The shuttles are powered by a fuel blend of 95% petroleum diesel and 5% biodiesel and have the latest emissions reduction technology. [20] [21]

To the north lies the Shoreline Amphitheatre and Intuit, and to the south lies Microsoft Corporation's Silicon Valley research complex, the Computer History Museum, and Century Theatres. Moffett Field lies nearby to the east. 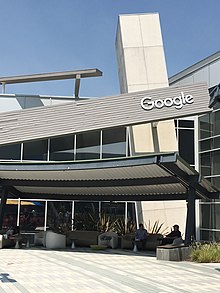 A restaurant at Googleplex

Google in its 2012-year-end annual report said it had 3.5 million square feet of office space in Mountain View. [17]

Google has another large campus in Mountain View dubbed "The Quad" at 399 N Whisman Road about 3 miles (5 kilometers) from the Googleplex. [22]

Bicycle used [24] by employees on Googleplex

In addition, the secret Google X Lab, which is the development lab for items such as Google Glass, is located in "ordinary two-story red-brick buildings" about 1⁄2 mile (800 meters) from the Googleplex. It has a "burbling fountain out front and rows of company-issued bikes, which employees use to shuttle to the main campus." [25]

The Googleplex was featured in the 2013 film The Internship, with the Georgia Tech campus standing in as a double, because Google doesn't allow filming on the campus grounds for privacy reasons. [26] It was also the inspiration for the fictional Hooli headquarters in the HBO TV series Silicon Valley. [27]