From Wikipedia, the free encyclopedia
(Redirected from Geography of New York–New Jersey Harbor Estuary)
One of the most intricate natural harbors in the world 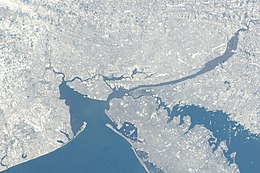 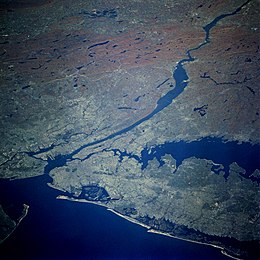 The New York–New Jersey Harbor Estuary, also known as the Hudson-Raritan Estuary, is in the northeastern states of New Jersey and New York on the East Coast of the United States. The system of waterways of the Port of New York and New Jersey forms one of the most intricate natural harbors in the world [1] [2] and one of the busiest ports of the United States. The harbor opens onto the New York Bight in the Atlantic Ocean to the southeast and Long Island Sound to the northeast.

Although the overall form of the estuary remains unchanged from the time of Giovanni da Verrazzano's visit in 1524, all parts have changed at least a little, and some parts, such as Hell Gate and Ellis Island, have been almost completely altered. In the greatest hidden change, the navigational channels have been deepened from the natural 17 feet (5.2 m) depth to 45 feet (14 m). In some places this required blasting of bedrock. [3]

There is an extremely complex system of tides and currents. Both the Bight and the Sound are essentially marine bodies with tides and saltwater, but the Sound compared to the Atlantic is about 20–30% less saline (as an estuary), and the tide is about 3 hours later with as much as 70% more variation. Rivers add a fresher, non-tidal inflow although the tide and brackishness extend well up rivers [4] throughout the extended hydrologic system from Albany to Montauk Point to the Hudson Canyon region of the New York Bight. The New York Harbor Observing and Prediction System (NYHOPS) [5] utilizes information from sensors, weather forecasts, and environment models to provide real-time forecasts of meteorological and oceanographic conditions in the area.

Since the Ash Wednesday Storm of 1962 beaches along the shores of the East Coast have been regularly replenished with sand pumped in from off-shore. [6] [7] The United States Army Corps of Engineers (USACE) coordinates the projects. [8] [9]

In 2016, USACE and the Port Authority of New York and New Jersey produced a comprehensive restoration plan for the New York Harbor region, with proposals to mitigate the effects of sea level rise through projects to restore natural areas. [10] In September the USACE released the New York New Jersey Harbor and Tributaries Study (HATS). [11] [12]

Features of the harbor estuary

The lists below includes features of the Port of New York and New Jersey with a waterborne emphasis, starting with natural features. Where possible the list proceeds from the Lower Bay entrance approximately clockwise around the Harbor. The alternative sorting is by jurisdiction.

One of the many duties of the Port Authority of New York and New Jersey is to develop trade interests in the New York-New Jersey area. The Port Authority operates most of the containerized port facilities listed here, and also collaborates with the Army Corps of Engineers to maintain shipping channels in the harbor.

Government and other agencies