Gateway was created by the U.S. Congress in 1972 [5] to preserve and protect scarce or unique natural, cultural, and recreational resources with relatively convenient access by a high percentage of the nation's population. [6] It is owned by the federal government and managed by the National Park Service.

In 1969, the Regional Plan Association proposed a new national seashore in the New York metropolitan area, to be administered by the United States Department of the Interior. [7] U.S. President Richard Nixon put his support behind a very similar proposal in 1970, with one significant change: instead of being designated a "seashore", the protected area would be a national park. In May of that year, the president started the process of getting Congressional approval for this move. [8]

The recreation area comprises three units and 11 park sites in all. Primary law enforcement in the Gateway National Recreation Area is the responsibility of the United States Park Police in the New York units, and National Park Service Rangers in the New Jersey unit.

Jamaica Bay Unit, in Brooklyn and Queens, includes much of the shoreline and water below the Shore Parkway beginning at Plum Beach and ending at John F. Kennedy International Airport, along with several dozen islands in Jamaica Bay, a tidal estuary. It also includes most of the western part of the Rockaway Peninsula, which separates Jamaica Bay from the Atlantic Ocean. Among the sites in this unit are: 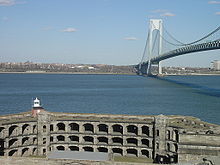 Battery Weed at Fort Wadsworth (foreground) on the Narrows, under the Verrazano-Narrows Bridge

Staten Island Unit is located on the southeastern shore of Staten Island facing Lower New York Bay. It includes Hoffman and Swinburne Islands, both off limits to visitation and managed primarily for the benefit of avian species. The unit also includes the following three sites:

Sandy Hook Unit is in Monmouth County in northern New Jersey. The barrier peninsula forms the other side of the "gateway" to New York Harbor, and includes two park sites: