From Wikipedia, the free encyclopedia
This article is about the ancient portion of Anatolia. For Galatai, see Gaul. For other uses, see Galatia (disambiguation).
Not to be confused with Galicia or Galatea.
Ancient region of central Anatolia once inhabited by Celts

Galatia ( /ɡəˈleɪʃə/; Ancient Greek: Γαλατία, Galatía, " Gaul") was an ancient area in the highlands of central Anatolia, roughly corresponding to the provinces of Ankara and Eskişehir, in modern Turkey. Galatia was named after the Gauls from Thrace (cf. Tylis), who settled here and became a small transient foreign tribe in the 3rd century BC, following the supposed Gallic invasion of the Balkans in 279 BC. It has been called the "Gallia" of the East.[ citation needed]

Galatia was bounded on the north by Bithynia and Paphlagonia, on the east by Pontus and Cappadocia, on the south by Cilicia and Lycaonia, and on the west by Phrygia. Its capital was Ancyra (i.e. Ankara, today the capital of modern Turkey).

The terms "Galatians" came to be used by the Greeks for the three Celtic peoples of Anatolia: the Tectosages, the Trocmii, and the Tolistobogii. [1] [2] By the 1st century BC, the Celts had become so Hellenized that some Greek writers called them Hellenogalatai (Ἑλληνογαλάται). [3] [4] The Romans called them Gallograeci. [4] Though the Celts had, to a large extent, integrated into Hellenistic Asia Minor, they preserved their linguistic and ethnic identity. [1]

By the 4th century BC, the Celts had penetrated into the Balkans, coming into contact with the Thracians and Greeks. [5] In 380 BC, they fought in the southern regions of Dalmatia (present day Croatia), and rumors circulated around the ancient world that Alexander the Great's father, Philip II of Macedonia had been assassinated by someone using a dagger of Celtic origins. [6] [7] Arrian writes that "Celts established on the Ionic coast" were among those who came to meet Alexander the Great during a campaign against the Getae in 335 BC. [8] Several ancient accounts mention that the Celts formed an alliance with Dionysius I of Syracuse who sent them to fight alongside the Macedonians against the Thebans. [9] In 279 BC, two Celtic factions united under the leadership of Brennus and began to push southwards from southern Bulgaria towards the Greek states. According to Livy, a sizable force split off from this main group and headed toward Asia Minor. [10] 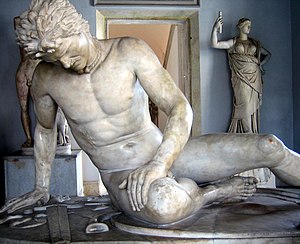 For several years, a federation of Hellespontine cities, including Byzantion and Chalkedon, prevented the Celts from entering Asia Minor. [4] [1] During the course of the power struggle between Nikomedes I of Bithynia and his brother Zipoetes, the former hired 20,000 Galatian mercenaries. The Galatians split into two groups headed by Leonnorius and Lutarius respectively, which crossed the Bosporus and the Hellespont respectively. In 277 BC, when the hostilities had ended the Galatians came out of Nikomedes' control and began raiding Greek cities in Asia Minor while Antiochus was solidifying his rule in Syria. The Galatians looted Cyzikus, Ilion, Didyma, Priene, Thyatira and Laodicea on the Lycus, while the citizens of Erythras paid them ransom. Either in 275 or 269 BC, Antiochus' army faced the Galatians somewhere on the plain of Sardis in the Battle of Elephants. In the aftermath of the battle, the Celts then settled in northern Phrygia, a region that eventually came to be known as Galatia. [11]

Upon the death of Deiotarus, the Kingdom of Galatia was given to Amyntas, an auxiliary commander in the Roman army of Brutus and Cassius who gained the favor of Mark Antony. [13] After his death in 25 BC, Galatia was incorporated by Augustus into the Roman Empire, becoming a Roman province. [14] Near his capital Ancyra (modern Ankara), Pylamenes, the king's heir, rebuilt a temple of the Phrygian god Men to venerate Augustus (the Monumentum Ancyranum), as a sign of fidelity. It was on the walls of this temple in Galatia that the major source for the Res Gestae of Augustus were preserved for modernity. Few of the provinces proved more enthusiastically loyal to Rome.

Josephus related the Biblical figure Gomer to Galatia (or perhaps to Gaul in general): "For Gomer founded those whom the Greeks now call Galatians, [Galls], but were then called Gomerites." [15] Others have related Gomer to Cimmerians.

Paul the Apostle visited Galatia in his missionary journeys, [16] and wrote to the Christians there in the Epistle to the Galatians.

Although originally possessing a strong cultural identity, by the 2nd century AD, the Galatians had become assimilated ( Hellenization) into the Hellenistic civilization of Anatolia. [17] The Galatians were still speaking the Galatian language in the time of St. Jerome (347–420 AD), who wrote that the Galatians of Ancyra and the Treveri of Trier (in what is now the Rhineland) spoke the same language (Comentarii in Epistolam ad Galatos, 2.3, composed c. 387).

In an administrative reorganisation (c. 386–395), two new provinces succeeded it, Galatia Prima and Galatia Secunda or Salutaris, which included part of Phrygia. The fate of the Galatian people is a subject of some uncertainty, but they seem ultimately to have been absorbed into the Greek-speaking populations of Anatolia.