From Wikipedia, the free encyclopedia
Effect of low temperature on skin and other tissues
This article is about a medical condition. For other uses, see Frostbite (disambiguation).
Medical condition

Frostbite is a skin injury that occurs when exposed to extreme low temperatures, causing the freezing of the skin or other tissues, [1] commonly affecting the fingers, toes, nose, ears, cheeks and chin areas. [6] Most often, frostbite occurs in the hands and feet. [7] [8] The initial symptom is typically numbness. [1] This may be followed by clumsiness with a white or bluish color to the skin. [1] Swelling or blistering may occur following treatment. [1] Complications may include hypothermia or compartment syndrome. [2] [1]

People who are exposed to low temperatures for prolonged periods, such as winter sports enthusiasts, military personnel, and homeless individuals, are at greatest risk. [7] [1] Other risk factors include drinking alcohol, smoking, mental health problems, certain medications, and prior injuries due to cold. [1] The underlying mechanism involves injury from ice crystals and blood clots in small blood vessels following thawing. [1] Diagnosis is based on symptoms. [3] Severity may be divided into superficial (1st and 2nd degree) or deep (3rd and 4th degree). [2] A bone scan or MRI may help in determining the extent of injury. [1]

Prevention is by wearing proper, fully-covering clothing, maintaining hydration and nutrition, avoiding low temperatures, and minimizing strenuous physical activity while maintaining a sufficient core temperature. [2] Treatment is by gradual rewarming, generally from cold to warm water, and should only be done when consistent temperature can be maintained and refreezing is not a concern. [2] [1] Rapid heating or cooling should be avoided since it could potentially cause heart stress or cause burning. [9] Rubbing or applying force to the affected areas should be avoided as it may cause further damage such as abrasions. [2] The use of ibuprofen and tetanus toxoid is recommended for pain relief or to reduce swelling or inflammation. [1] For severe injuries, iloprost or thrombolytics may be used. [1] Surgery is sometimes necessary. [1] Amputation should be considered a few months after exposure in order to consider whether the extent of injury is permanent damage and thus necessitates drastic treatment. [2]

Evidence of frostbite occurring in people dates back 5,000 years. [1] Evidence was documented in a pre-Columbian mummy discovered in the Andes. [7] The number of cases of frostbite is unknown. [5] Rates may be as high as 40% a year among those who mountaineer. [1] The most common age group affected is those 30 to 50 years old. [4] Frostbite has also played an important role in a number of military conflicts. [1] The first formal description of the condition was in 1813 by Dominique Jean Larrey, a physician in Napoleon's army, during its invasion of Russia. [1] 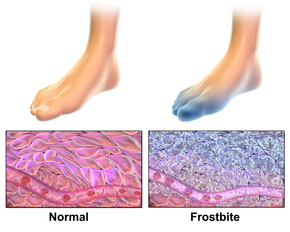 Areas that are usually affected include cheeks, ears, nose and fingers and toes. Frostbite is often preceded by frostnip. [2] The symptoms of frostbite progress with prolonged exposure to cold. Historically, frostbite has been classified by degrees according to skin and sensation changes, similar to burn classifications. However, the degrees do not correspond to the amount of long term damage. [10] A simplification of this system of classification is superficial (first or second degree) or deep injury (third or fourth degree). [11]

The major risk factor for frostbite is exposure to cold through geography, occupation and/or recreation. Inadequate clothing and shelter are major risk factors. Frostbite is more likely when the body's ability to produce or retain heat is impaired. Physical, behavioral, and environmental factors can all contribute to the development of frostbite. Immobility and physical stress (such as malnutrition or dehydration) are also risk factors. [7] Disorders and substances that impair circulation contribute, including diabetes, Raynaud's phenomenon, tobacco and alcohol use. [11] Homeless individuals and individuals with some mental illnesses may be at higher risk. [7]

In frostbite, cooling of the body causes narrowing of the blood vessels ( vasoconstriction). Temperatures below −23 °C (−9 °F) are required to form ice crystals in the tissues. [11][ failed verification] The process of freezing causes ice crystals to form in the tissue, which in turn causes damage at the cellular level. Ice crystals can damage cell membranes directly. In addition, ice crystals can damage small blood vessels at the site of injury. [11] Typically any temperature below -0.55C (31F), is required for frostbite to begin to set in. [13]

The process of frostbite differs from the process of non-freezing cold injury (NFCI). In NFCI, temperature in the tissue decreases gradually. This slower temperature decrease allows the body to try to compensate through alternating cycles of closing and opening blood vessels ( vasoconstriction and vasodilation). If this process continues, inflammatory mast cells act in the area. Small clots (microthrombi) form and can cut off blood to the affected area (known as ischemia) and damage nerve fibers. Rewarming causes a series of inflammatory chemicals such as prostaglandins to increase localized clotting. [14]

The pathological mechanism by which frostbite causes body tissue injury can be characterized by four stages: Prefreeze, freeze-thaw, vascular stasis, and the late ischemic stage. [15]

Frostbite is diagnosed based on signs and symptoms as described above, and by patient history. Other conditions that can have a similar appearance or occur at the same time include:

People who have hypothermia often have frostbite as well. [10] Since hypothermia is life-threatening this should be treated first. Technetium-99 or MR scans are not required for diagnosis, but might be useful for prognostic purposes. [17]

A Centers for Disease Control and Prevention infographic video about frostbite prevention.

The Wilderness Medical Society recommends covering the skin and scalp, taking in adequate nutrition, avoiding constrictive footwear and clothing, and remaining active without causing exhaustion. Supplemental oxygen might also be of use at high elevations. Repeated exposure to cold water makes people more susceptible to frostbite. [18] Additional measures to prevent frostbite include: [2]

Individuals with frostbite or potential frostbite should go to a protected environment and get warm fluids. If there is no risk of re-freezing, the extremity can be exposed and warmed in the groin or underarm of a companion. If the area is allowed to refreeze, there can be worse tissue damage. If the area cannot be reliably kept warm, the person should be brought to a medical facility without rewarming the area. Rubbing the affected area can also increase tissue damage. Aspirin and ibuprofen can be given in the field [7] to prevent clotting and inflammation. Ibuprofen is often preferred to aspirin because aspirin may block a subset of prostaglandins that are important in injury repair. [19]

The first priority in people with frostbite should be to assess for hypothermia and other life-threatening complications of cold exposure. Before treating frostbite, the core temperature should be raised above 35 °C. Oral or intravenous (IV) fluids should be given. [7]

Other considerations for standard hospital management include:

If the area is still partially or fully frozen, it should be rewarmed in the hospital with a warm bath with povidone iodine or chlorhexidine antiseptic. [7] Active rewarming seeks to warm the injured tissue as quickly as possible without burning. The faster tissue is thawed, the less tissue damage occurs. [20] According to Handford and colleagues, "The Wilderness Medical Society and State of Alaska Cold Injury Guidelines recommend a temperature of 37–39 °C, which decreases the pain experienced by the patient whilst only slightly slowing rewarming time." Warming takes 15 minutes to 1 hour. The faucet should be left running so the water can circulate. [21] Rewarming can be very painful, so pain management is important. [7]

People with potential for large amputations and who present within 24 hours of injury can be given TPA with heparin. [1] These medications should be withheld if there are any contraindications. Bone scans or CT angiography can be done to assess damage. [22]

Blood vessel dilating medications such as iloprost may prevent blood vessel blockage. [7] This treatment might be appropriate in grades 2–4 frostbite, when people get treatment within 48 hours. [22] In addition to vasodilators, sympatholytic drugs can be used to counteract the detrimental peripheral vasoconstriction that occurs during frostbite. [23]

A systematic review and metaanalysis revealed that iloprost alone or iloprost plus recombinant tissue plasminogen activator (rtPA) may decrease amputation rate in case of severe frostbite in comparison to buflomedil alone with no major adverse events reported from iloprost or iloprost plus rtPA in the included studies. [24]

Various types of surgery might be indicated in frostbite injury, depending on the type and extent of damage. Debridement or amputation of necrotic tissue is usually delayed unless there is gangrene or systemic infection ( sepsis). [7] This has led to the adage "Frozen in January, amputate in July". [25] If symptoms of compartment syndrome develop, fasciotomy can be done to attempt to preserve blood flow. [7] 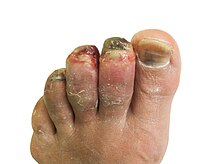 Tissue loss and autoamputation are potential consequences of frostbite. Permanent nerve damage including loss of feeling can occur. It can take several weeks to know what parts of the tissue will survive. [11] Time of exposure to cold is more predictive of lasting injury than temperature the individual was exposed to. The classification system of grades, based on the tissue response to initial rewarming and other factors is designed to predict degree of longterm recovery. [7]

Grade 1: if there is no initial lesion on the area, no amputation or lasting effects are expected

Grade 2: if there is a lesion on the distal body part, tissue and fingernails can be destroyed

Grade 3: if there is a lesion on the intermediate or near body part, auto-amputation and loss of function can occur

Grade 4: if there is a lesion very near the body (such as the carpals of the hand), the limb can be lost. Sepsis and/or other systemic problems are expected. [7]

A number of long term sequelae can occur after frostbite. These include transient or permanent changes in sensation, paresthesia, increased sweating, cancers, and bone destruction/ arthritis in the area affected. [26]

There is a lack of comprehensive statistics about the epidemiology of frostbite. In the United States, frostbite is more common in northern states. In Finland, annual incidence was 2.5 per 100,000 among civilians, compared with 3.2 per 100,000 in Montreal. Research suggests that men aged 30–49 are at highest risk, possibly due to occupational or recreational exposures to cold. [27]

Frostbite has been described in military history for millennia. The Greeks encountered and discussed the problem of frostbite as early as 400 BCE. [11] Researchers have found evidence of frostbite in humans dating back 5,000 years, in an Andean mummy. Napoleon's Army was the first documented instance of mass cold injury in the early 1800s. [7] According to Zafren, nearly 1 million combatants fell victim to frostbite in the First and Second World Wars, and the Korean War. [11] 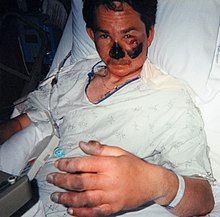 Mountaineer Nigel Vardy in hospital after developing frostbite when benighted on Denali in 1999. His nose, fingers and toes were subsequently amputated.

Several notable cases of frostbite include: Captain Lawrence Oates, an English army captain and Antarctic explorer who in 1912 died of complications of frostbite; [28] Harold Bride, the junior wireless operator of RMS Titanic, who suffered severe frostbite on his feet as he and other survivors stood for over an hour on the back of a capsized lifeboat knee-deep in freezing water--Bride had to be carried off from the rescue vessel RMS Carpathia after it arrived in New York; noted American rock climber Hugh Herr, who in 1982 lost both legs below the knee to frostbite after being stranded on Mount Washington (New Hampshire) in a blizzard; [29] Beck Weathers, a survivor of the 1996 Mount Everest disaster who lost his nose and hands to frostbite; [30] Scottish mountaineer Jamie Andrew, who in 1999 had all four limbs amputated due to sepsis from frostbite sustained after becoming trapped for four nights whilst climbing Les Droites in the Mont Blanc massif. [31]

Evidence is insufficient to determine whether or not hyperbaric oxygen therapy as an adjunctive treatment can assist in tissue salvage. [32] Cases have been reported, but no randomized control trial has been performed on humans. [33] [34] [35] [36] [37]

Medical sympathectomy using intravenous reserpine has also been attempted with limited success. [26] Studies have suggested that administration of tissue plasminogen activator (tPa) either intravenously or intra-arterially may decrease the likelihood of eventual need for amputation. [38]

Wikivoyage has a travel guide for Travelling in cold weather.
Retrieved from " https://en.wikipedia.org/?title=Frostbite&oldid=1122627123"
Categories:
Hidden categories: