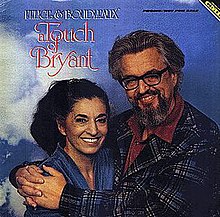 In 1979, they released their own album called A Touch of Bryant.

Boudleaux Bryant was born in Shellman, Georgia, in 1920 and attended local schools as a child. He trained as a classical violinist. Although he performed with the Atlanta Philharmonic Orchestra during its 1937–38 season, he had more interest in country fiddling. Bryant joined Hank Penny and his Radio Cowboys, an Atlanta-based western music band. [3] [4]

In 1945, Bryant met Matilda Genevieve Scaduto (whom he called Felice) when he performed at a hotel in her hometown of Milwaukee, Wisconsin. She was born in the city in 1925 to an ethnic Sicilian family, and had written lyrics set to traditional Italian tunes. During World War II, she sang and directed shows at the local USO. [5]

Bryant and Scaduto eloped five [6] days after meeting. [5] Boudleaux's song "All I Have to Do Is Dream" is "autobiographical" for Felice. She was working as an elevator operator at the Schroeder Hotel when she saw Bryant. She has said that she "recognized" him immediately; she had seen his face in a dream when she was eight years old, and had "looked for him forever." She was 19 when they met.

During the first years of their marriage, the Bryants struggled financially, living in a mobile home, where they wrote more than 80 songs. They tried to sell their compositions to a number of country music artists but were either ignored or rejected until Little Jimmy Dickens recorded their song "Country Boy." It went to No. 7 on the country chart in 1948 and opened the door to a working relationship with Fred Rose at Acuff-Rose Music in Nashville, Tennessee.

In 1950, the Bryants moved to Nashville to work full-time at songwriting. Some of their compositions from the early 1950s included the swinging "Sugar Beet" (recorded by Moon Mullican) and the bluesy "Midnight" (recorded by Red Foley).

The Bryants wrote more songs for Dickens as well as for country artist Carl Smith. At the same time, they released four 45-rpm singles of their own to modest success.

Beginning in 1957, the Bryants came to national prominence in both country and pop music when they wrote a string of very successful songs for the Everly Brothers [1] and hits for other singers such as Roy Orbison and Buddy Holly. Their compositions were recorded by many artists from a variety of musical genres, including Lynn Anderson, Tony Bennett, Frankie Laine, Sonny James, Eddy Arnold, Bob Moore, Charley Pride, Nazareth, Jim Reeves, Leo Sayer, Jerry Lee Lewis, Simon & Garfunkel, Sarah Vaughan, The Grateful Dead, Elvis Costello, Count Basie, Dean Martin, Ray Charles, Gram Parsons, Joan Jett, and Bob Dylan. (Dylan's Self Portrait album has a song by Boudleaux and another he co-wrote with Felice.) 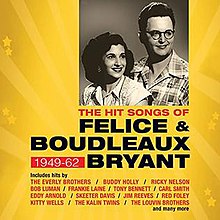 The Bryants wrote hits for many artists.

In 1962, The Bryants wrote "Too Many Chicks," a song that became a hit for Leona Douglas, the first African-American woman to record as a country music singer. [7]

The Bryants eventually moved to a house not far from Nashville on Old Hickory Lake in Hendersonville, Tennessee, near friends Roy Orbison and Johnny Cash. In 1978, they moved to Gatlinburg, Tennessee. They had often stayed at The Gatlinburg Inn, where they wrote numerous songs, including " Rocky Top." They purchased the Rocky Top Village Inn in the town next to the Great Smoky Mountains National Park. In 1979, they released their own album called A Touch of Bryant. " Rocky Top", written in 1967, was adopted as a state song by Tennessee in 1982, [8] and as the unofficial fight song for the University of Tennessee sports teams. The Bryants wrote more than 6,000 songs, some 1,500 of which were recorded. [5]

Boudleaux Bryant is the third most successful songwriter of the 1950s on the UK Singles Chart, and Felice Bryant is the 21st. [9]

Their works are present in the House of Bryant, which is located in Gatlinburg. From September 2019 to August 2020, their artifacts were on exhibit at the Country Music Hall of Fame in Nashville.

Boudleaux Bryant died in 1987. Felice Bryant remained active writing songs; in 1991, the Nashville Arts Foundation honored her with its Living Legend Award. She died in 2003. They are interred together in the Woodlawn Memorial Park Cemetery in Nashville.

Various songs of theirs, especially "All I Have to Do Is Dream", "Bye Bye, Love", "Love Hurts" and "Wake Up, Little Susie", have been covered by numerous other artists over the years. "Rocky Top" is played by the Pride of the Southland Band at University of Tennessee sporting events. [11]