From Wikipedia, the free encyclopedia
City that influences fashion trends

A fashion capital is a city with major influence on international fashion scene, from history, heritage, designers, trends, styles, to manufacturing innovation and retailing of fashion products, including events such as fashion weeks, fashion council awards, and trade fairs that together, generate significant economic output. [1]

With exquisite fashion heritage, structured organization, and the most vaunted fashion designers of the last century, four cities are considered the main fashion capitals of the 21st century. Called the "Big Four", the most prominent fashion capitals of the world—in chronological order of their eponymous fashion weeks, are New York, London, Milan, and Paris, which receive the majority of press coverage. [2]

Definition of a fashion capital

A fashion capital assumes leadership role in the design of fashion, the creation of styles, and the emergence of fashion trends. In addition, fashion capitals have a broad mix of business, artistic, entertainment, cultural, and leisure activities that are internationally recognized for having a unique and strong identity. [3] The status of a fashion capital is also linked to the city's domestic and international profile. [4] Fashion capitals are part of a wider social construct scene, with design schools, fashion magazines, and powerful market of affluent consumers of fashion. [4]

Since the 16th century, Milan had been regarded as the fashion capital of the world. Nowadays, while the term fashion capital is still used to describe cities that hold fashion weeks most prominently, in chronological order— New York, London, Paris, and Milan [5] [6] [7] [8] [9] it is the economic development and stylistic, created by a fashion capital city, that matters to the showbiz and fashion industry. [10] [11] Also, nowadays, the term of fashion capital includes other world cities known for hosting notable fashion events and have influential designers in the world of global fashion. [12]

Historically, several cities have been, in turn, fashion capitals. During the Renaissance era, different city-states in what would become modern-day Italy were Europe's main trendsetters, [13] due to the cultural power they exerted in that period of time. This included cities such as Florence, Milan, Rome, Naples, Genoa, and Venice. [14]

Progressing into the late 16th century, with influence of the English royal court, London became a major city in European fashion. Similarly, due to the power of Spain at the period, the Spanish court started to influence fashion, making it a major centre. In the 17th century, as the Renaissance started to fade away, with the power of the French court under Louis XIV, Paris established itself as Europe's main fashion centre. [15]

During the 19th century, with the powerful British Empire and young Queen Victoria on the throne (from 1837), London once again became a major fashion leader. [16] However, it continued to look to Paris for stylistic inspiration, and the British 'father of haute couture' Charles Frederick Worth relocated to Paris in 1846. He did this to perfect and then commercialize his craft, also holding the first fashion shows and launching the concept of fashion labels there. [17]

20th century and beyond 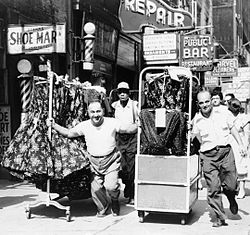 During the Golden Twenties, Berlin was considered the vanguard fashion capital. [18]

Throughout the 20th century – but particularly after World War II – New York City rose in stature as a fashion capital, challenging the dominance of Paris with a different approach, especially in its development and popularization of sportswear as fashion during the 1940s and '50s. [19]

During the 1950s, Italy rose in prominence again. [20] Florence re-emerged as a leading city in fashion, [21] although focus shifted to Milan from the 1970s on as leading design houses moved to the city. [22] 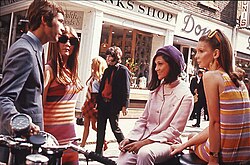 In the 1980s, Tokyo claimed its place as a fashion capital with a new generation of avant-garde designers, including Issey Miyake or Rei Kawakubo of Comme des Garçons gaining worldwide attention, even if most of the city's newcomers gained prominence after showcasing their clothing in Paris. The fashion was radically different in both its use of textiles and in the way designers cut and draped. [23] [24]

Since then, new fashion hubs have emerged worldwide, and the old order has faced challenges from all corners of the globe, including Africa, South America, and Australasia. [25] Since 2007, Berlin has again been highlighted as an increasingly important centre for global fashion trends. [26] [27]

A 2011 issue of Fashion Theory: Journal of Dress, Body and Culture explored the move away from the traditional dominance of five key cities (New York, Paris, Milan, Tokyo, and London), with co-editor Lise Skov, suggesting what she described as a "poly-centric" fashion industry developing in the 21st century. [19]

In 2019, the Vienna-based fashion intelligence firm IFDAQ under the leadership of fashion sociologist Professor Frédéric Godart measured in a scientific approach the importance, influence and impact of cities in the fashion industry with neural networks from a large data lake. The resulting IFDAQ Global Fashion and Luxury Cities Index [28] revealed New York as the leading fashion capital, followed by Paris, Milan, and London. A further elaboration of the data in cooperation with the Institution of Engineering and Technology visualized the impact of geopolitical events on the fashion capitals, including Brexit and the US-China trade war. [1] 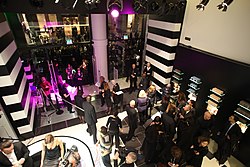