From Wikipedia, the free encyclopedia
Deep fried balls of ground chickpeas or fava beans.
This article is about the Middle Eastern food. For the film, see Falafel (film). For the backgammon player, see Matvey Natanzon.

listen)) is a deep-fried ball or patty-shaped fritter made from ground chickpeas, fava beans, or both. Falafel is a traditional Middle Eastern food, commonly served in a pita, which acts as a pocket, or wrapped in a flatbread known as taboon; "falafel" also frequently refers to a wrapped sandwich that is prepared in this way. The falafel balls are topped with salads, pickled vegetables, hot sauce, and drizzled with tahini-based sauces. Falafel balls may also be eaten alone as a snack or served as part of a meze tray (assortment of appetizers).

Falafel is eaten throughout the Middle East and is a common street food. Falafel is usually made with fava beans in Egypt and with chickpeas in the Levant. It is popular with vegetarians world-wide. [1]

Falafel is known as taʿmiya ( Egyptian Arabic: طعمية‎ ṭaʿmiyya, IPA:  [tˤɑʕˈmejjɑ]) in most of Egypt and in Sudan. The word is derived from a diminutive singulative form of the Arabic word ṭaʿām (طعام, "food"); the particular form indicates "a unit" of the given root in this case Ṭ-ʕ-M (ط ع م, having to do with taste and food), thus meaning "a little piece of food" or "small tasty thing". [7] [8] [9]

The word falafel can refer to the fritters themselves or to sandwiches filled with them.

The origin of falafel is controversial. [10] The dish most likely originated in Egypt, possibly influenced by similar Indian dishes. [11] [12] [13] [14] [15] There is a legend that a fava bean version was eaten by Copts as early as the 4th century during Lent, but there is no documentary evidence for this. It has been speculated that its history may go back to Pharaonic Egypt. [16] However, the earliest written references to falafel from Egyptian sources date to the 19th century, [17] [18] [19] and oil was probably too expensive to use for deep frying in ancient Egypt. [19] [20]

As Alexandria is a port city, it was possible to export the dish and name to other areas in the Middle East. [21] The dish later migrated northwards to the Levant, where chickpeas replaced the fava beans. [22] [23] 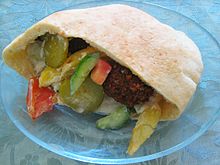 Falafel is a common form of street food or fast food in Egypt as well as the Levant. [24] The croquettes are regularly eaten as part of meze. During Ramadan, falafel balls are sometimes eaten as part of the iftar, the meal that breaks the daily fast after sunset. [8] Falafel became so popular that McDonald's for a time served a "McFalafel" in its breakfast menu all over Egypt. [25] Falafel is still popular with the Copts, who cook large volumes during religious holidays. [26]

Debates over the history of falafel have sometimes devolved into political discussions about the relationship between Arabs and Israelis. [22] In modern times, falafel has been considered a national dish of Egypt, [27] Palestine, [28] [29] and Israel. [30] [31] Many Palestinians resent what they see as the appropriation of their dish by Israelis. [32] Additionally, the Lebanese Industrialists' Association has raised assertions of copyright infringement against Israel concerning falafel. [22] [23] [33]

Falafel plays an iconic role in Israeli cuisine and is widely considered to be the national dish of the country. [32] While falafel is not a specifically Jewish dish, it was eaten by Mizrahi Jews in their countries of origin. [10] [22] Later, it was adopted by early Jewish immigrants to Ottoman Palestine. [32] As it is plant-based, Jewish dietary laws classify it as pareve and thus allow it to be eaten with both meat and dairy meals. [34]

In 2012, one of the hotels in the capital of Jordan, Amman, prepared the world's largest falafel disc weighing about 75 kg – breaking the previous record set at a Jewish food festival in the United States. [35] [36]

Despite the frying process, the inside of a falafel remains soft.

Falafel has become popular among vegetarians and vegans, as an alternative to meat-based street foods, [1] and is now sold in packaged mixes in health-food stores. [42] While traditionally thought of as being used to make veggie burgers, [43] its use has expanded as more and more people have adopted it as a source of protein. [44] In the United States, falafel's versatility has allowed for the reformulating of recipes for meatloaf, sloppy joes and spaghetti and meatballs into vegetarian dishes. [45] [46] 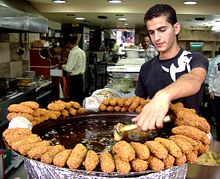 A man using an aleb falafel while frying falafel

Falafel is made from fava beans or chickpeas, or a combination. Chickpeas are common in most Middle Eastern countries. [47] The dish is usually made with chickpeas in Syria, Lebanon, Jordan, Israel and Palestine. [26] [48] [49] This version is the most popular in the West. [26] The Egyptian variety uses only fava beans. [50]

When chickpeas are used, they are not cooked prior to use (cooking the chickpeas will cause the falafel to fall apart, requiring adding some flour to use as a binder). Instead they are soaked (sometimes with baking soda) overnight, then ground together with various ingredients such as parsley, scallions, and garlic. [26] Spices such as cumin and coriander are often added to the beans for added flavor. [51] The dried fava beans are soaked in water and then stone ground with leek, parsley, green coriander, cumin and dry coriander. [52] [53] The mixture is shaped into balls or patties. This can be done by hand or with a tool called an aleb falafel (falafel mould). [7] [47] The mixture is usually deep fried, or it can be oven baked.

Falafel is typically ball-shaped, but is sometimes made in other shapes, particularly doughnut-shaped.[ citation needed] The inside of falafel may be green (from green herbs such as parsley or green onion), or tan.

When served as a sandwich, falafel is often wrapped with flatbread or stuffed in a hollow pita, [54] or it can be served with flat or unleavened bread. [55] Tomatoes, lettuce, cucumbers, and other garnishes can be added. [56] [57] Falafel is commonly accompanied by tahini sauce. [26]

When made with chickpeas, falafel is high in protein, complex carbohydrates, and fiber. [60] Key nutrients are calcium, iron, magnesium, phosphorus, potassium, zinc, copper, manganese, vitamin C, thiamine, pantothenic acid, vitamin B, and folate. Phytochemicals include beta-carotene. [61] Falafel is high in soluble fiber, which has been shown to be effective in lowering blood cholesterol. [62] [63]

Chickpeas are low in fat and contain no cholesterol, but a considerable amount of fat is absorbed during the frying process. Falafel can be baked to reduce the high fat content associated with frying. [1] [56]