From Wikipedia, the free encyclopedia
Horticultural exposition in Antalya, Turkey

EXPO 2016 Antalya, which hosted national and international congresses, panels, meetings and seminars, also provided cultural and artistic activities for its guests. 8 million locals and foreign visitors visited EXPO 2016 Antalya over its 6-month duration. EXPO 2016 Antalya was held on a 112-hectare exhibit site in Aksu. EXPO 2016 Antalya aimed at being the start of a new way of thinking, the intoxicating scent of flowers and the laughter of children throughout the city bringing with it hopes for a greener world.

American singer-songwriter Demi Lovato performed at the exposition on October 1, 2016 as part of her Future Now Tour. [3]

Germany Pavilion was represented by Martin Berlin, the Ambassador of Germany to Turkey.[ citation needed]

The Deputy Commissioner-General of the Qatar Pavilion Fayqa Ashkanani and designed by Fatima Fawzi. [6] The design was inspired by the Sidra tree. [6]

The Commissioner General of Expo 2016

The Ambassador Erdoğan Kök [ tr] was the commission general of Expo 2016 Antalya. [7]

The facilities, which were built for the Expo 2016, were the Expo Tower, Turkey's first Agriculture and Biodiversity Museum, a congress center of 6,500 seating capacity, 5,000 and 800 seated two amphitheaters, a "Children Island" as playground and a "Science and Technology Center for Children". Further facilities were the Expo Pond, Expo Terrace in the form of peony, the symbol flower of the Expo 2016, Expo Hill, Expo Forest, Expo Square and "Culture and Arts Street" as well as restaurants. [8] 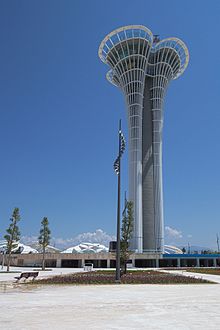 Expo Square in the foreground and Turkcell Expo Tower in the background.

The Expo Tower ( Turkish: Expo Kulesi) was designed by architects Serdar Kızıltaş and Zeynep Melike Atay. It has the form of a three-leaved peony that resembles the three-arched Hadrian's Gate ( Turkish: Üçkapılar, literally: "The Three Gates"), a landmark of Antalya. [9]

The tower is a 100.70 m (330.4 ft)-high structure situated at the western side of the fairground facing the main entrance. It has a diameter of 10.40 m (34.1 ft) at the base. The exterior of the tower is covered 2/3 of its height by aluminium composite panel and the upper part by steel facia construction. It has two basement, one ground floor and 17 stories. Three elevators can lift up 63 visitors at the same time to the three-leaved peony-formed observation platform atop the tower. [10] [11]

The fairground was situated on the Antalya- Alanya state road