From Wikipedia, the free encyclopedia
(Redirected from Executive branch)
Part of government that has the authority and responsibility for the daily administration of the state

The executive is the part of government exercising authority in and holding responsibility for the governance of a state. The executive executes and enforces law.

In political systems based on the principle of separation of powers, authority is distributed among several branches (executive, legislative, judicial)—an attempt to prevent the concentration of power in the hands of a single group of people. In such a system, the executive does not pass laws (the role of the legislature) or interpret them (the role of the judiciary). Instead, the executive enforces the law as written by the legislature and interpreted by the judiciary. The executive can be the source of certain types of law, such as a decree or executive order. Executive bureaucracies are commonly the source of regulations. 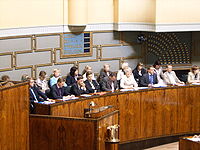 Vanhanen II Cabinet in a session of Finnish Parliament in 2007.

In parliamentary systems, the executive is responsible to the elected legislature, i.e. must maintain the confidence of the legislature (or one part of it, if bicameral). In certain circumstances (varying by state), the legislature can express its lack of confidence in the executive, which causes either a change in governing party or group of parties or a general election. Parliamentary systems have a head of government (who leads the executive, often called ministers) normally distinct from the head of state (who continues through governmental and electoral changes). In the Westminster type of parliamentary system, the principle of separation of powers is not as entrenched as in some others. Members of the executive ( ministers), are also members of the legislature, and hence play an important part in both the writing and enforcing of law.

In this context, the executive consists of a leader or leader of an office or multiple offices. Specifically, the top leadership roles of the executive branch may include:

In a presidential system, the leader of the executive is both the head of state and head of government. [1]

In a parliamentary system, a cabinet minister responsible to the legislature is the head of government, while the head of state is usually a largely ceremonial monarch or president. [2]