From Wikipedia, the free encyclopedia
1957 single by Buddy Holly

On the original single the Crickets are not mentioned, but it is known that Holly plays acoustic guitar; drummer Jerry Allison slaps his knees for percussion; Joe B. Mauldin plays a standup acoustic bass; [3] A celesta, which is a keyboard instrument with a glockenspiel-like tone, is also used in the recording. [4] 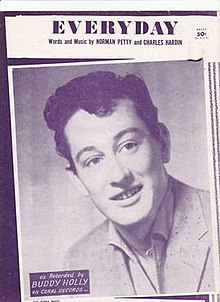 John Denver recorded this song for his 1971 album Aerie and released it as a single, which peaked at number 81 on the Billboard pop singles chart and number 21 on the Adult Contemporary chart in 1972. [6]

Bridget St. John recorded this song for her 1972 album Thank You For..., published by Dandelion and marketed by Polydor. Produced by Bridget St. John and Jerry Boys. [7]

Don McLean recorded this song for his 1973 album Playin' Favorites and released it as a single, which peaked at number 38 in the UK.

The English teen pop singer Nikki Richards recorded the song as the B-side of his first single in 1978.

A version recorded by James Taylor was released in 1985, rising to number 3 on the Billboard Adult Contemporary chart in the US and number 1 on the Canadian Adult Contemporary chart; it also reached number 61 on the Billboard Pop chart and number 26 on the Billboard Country chart. The song is included on his 1985 album " That's Why I'm Here" and his two-CD career retrospective, The Essential James Taylor, released in 2013. Cash Box called Taylor's version "a perfect showcase for Taylor’s mellow-rocking delivery" with "nice melodic changes and a touching sentiment." [8] Billboard said it has "the wit and style he applied to ' Handy Man." [9]

Erasure recorded it for their 2002 album Other People's Songs. The Trashmen and the indie rock band Rogue Wave also recorded it. The rock band Pearl Jam performed a rendition live in Lubbock, Texas, Holly's birthplace. It has also been performed live by Deep Purple. A version was recorded by hellogoodbye and released on their 2008 EP, Ukulele recordings. Phil Ochs used a portion of the song as part of his "Buddy Holly Medley", which was included on his album Gunfight at Carnegie Hall in 1974.

Elliott Murphy recorded this song for a French tribute, Every Day Is a Holly Day, in 1989.

Rogue Wave recorded a cover version for the covers compilation soundtrack released in support of video game Stubbs the Zombie in 2005.

Patrick Stump contributed a cover version to the Buddy Holly tribute album Listen to Me: Buddy Holly in 2011.

The song's title is spelled everyday, which is an adjective (meaning commonplace, ordinary, or normal), whereas in the context of the song the adverbial phrase every day (meaning each day) [13] is clearly intended: "Every day seems a little longer / Every day it's a-gettin' closer."[ citation needed]

The song is played in a 2009 episode of Family Guy during a parody of Stand by Me.

The song is played at the beginning of the eleventh episode of the fourth season of Lost (" Cabin Fever"), as well as during the closing credits of the penultimate episode of Mad Men ("The Milk and Honey Route").

The song is played in the sixth episode of the third season of Hulu's The Handmaid's Tale. It was also used in season three of Hulu's Future Man.

The song is covered in the end credits of the seventh episode of the second season of HBO's Crashing, sung by Fiona Apple.

The song is also sung in Party of Five (season 1, episode 7) by the character Julia, played by actress Neve Campbell.

The song is featured in the NBC show Lincoln Rhyme: Hunt for the Bone Collector. [15]

The song is used as the opening song for Ryan Reynolds’ and Rob McElhenney’s docuseries Welcome to Wrexham from episode 3 onwards.