From Wikipedia, the free encyclopedia
Statistics agency of the European Union
Not to be confused with Eurostar.

Eurostat operates pursuant to Regulation (EC) No 223/2009. Since the swearing in of the von der Leyen Commission in December 2019, Eurostat is allocated to the portfolio of the European Commissioner for the Economy, Paolo Gentiloni. [1] 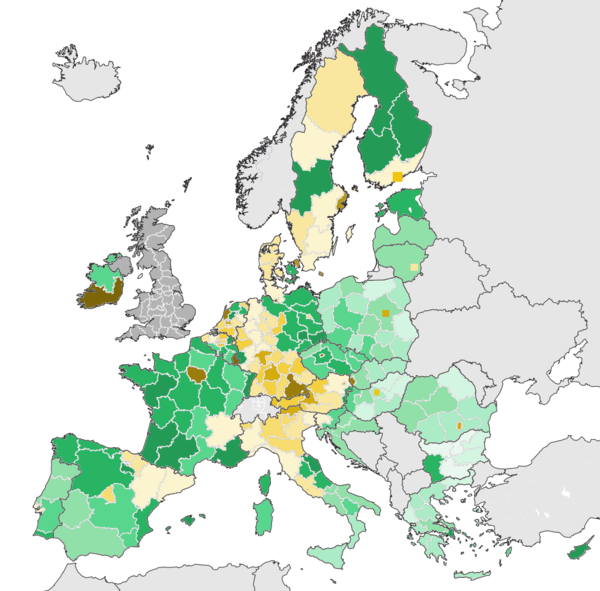 European regions by GDP, expressed as a percentage of the EU average

The Eurostat statistical work is structured into Themes and Sub-themes. [8]

General statistical activities related to the European Statistical system are:

Since Brexit occurred on February the first 2020, data has to be computed for the EU-27 because by definition Brexit makes the UK a third country to the EU.

Nonetheless, to avoid confusion with the previous EU-27 group of 27 member states — which was used in the series of statistical data before the accession of member state number 28 — another name for the current EU 27 without the UK is defined as EU27_2019 in February 2019 and EU27_2020 since March 2020 according to Eurostat [10] [11]

The name changed from EU27_2019 to EU27_2020 due to a British constitutional delay which resulted in Brexit being delivered in 2020 rather than the initially planned 2019.

The concept of the EU 28 has been used since 1 January 2014, also according to the Eurostat methodological manual on city statistics, 2017 edition.

Local data are also computed at the NUTS level.

Statistical cooperation in and around Europe

Eurostat is also engaged in cooperation with third countries through the European Statistical System, Enlargement Policy, and European Neighbourhood Policy. [12]

In 2021, European Statistical System includes 4 EFTA countries, that is 3 EEA countries and Switzerland. [13]

EU Enlargement Policy includes "candidate countries" in the process of joining the EU and other potential candidates. [13]

The trade and cooperation agreement between the European Union and the United Kingdom — since 1 January 2021 — includes a provision on statistical cooperation that foresees the establishment of a specific future arrangement. [13]

The most important statistics are made available via press releases. They are placed on the Eurostat website at 11:00 in the morning. This is also the time that the press release content may be distributed to the public by press agencies.

Eurostat disseminates its statistics free of charge via its Internet and its statistical databases that are accessible via the Internet. The statistics are hierarchically ordered in a navigation tree. Tables are distinguished from multi-dimensional datasets from which the statistics are extracted via an interactive tool.

Since September 2009 Eurostat has pioneered a fully electronical way of publishing, Statistics Explained, [14] like Wikipedia based on Mediawiki open source software and with a largely similar structure and navigation. Statistics Explained is not only a dissemination format, however, but also a wiki working platform for producing flagship publications like the Eurostat Yearbook. [15]

Microdata, which in principle allows the identification of the statistical unit (e.g., a person in the labour force survey or a company for innovation statistics), is treated as strictly confidential. Under tight security procedures various anonymised datasets are provided to research institutions for validated research projects.