Edward Carroll Stone (born January 23, 1936) [1] is an American space scientist, professor of physics at the California Institute of Technology, and former director of the NASA Jet Propulsion Laboratory (JPL). [2] [3] 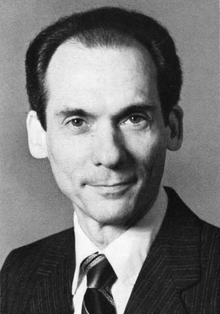 Stone was born in Knoxville, Iowa. After receiving his undergraduate education at Iowa's Burlington Junior College in Iowa, Stone attended the University of Chicago where he earned his M.S. and Ph.D. degrees in physics. Stone's astrophysics career goes back to his first cosmic-ray experiments on Discoverer satellites in 1961. He then joined the staff of Caltech as a research fellow, and became a full faculty member in 1967.

He was named professor of physics in 1976, and was chair of the Division of Physics, Mathematics, and Astronomy from 1983 to 1988. He has also served as director of the Caltech Space Radiation Laboratory, and as vice president for Astronomical Facilities. He is currently the Morrisroe Professor of Physics [4] and the vice-chair of the Thirty Meter Telescope Board of Directors. [5]

He was the principal investigator for the Cosmic Ray System on the Voyager 1 and 2 spacecraft, an experiment to measure cosmic rays. [6] He also appeared in The Farthest, a 2017 documentary on the Voyager program. 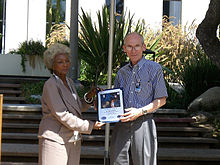 Ed Stone receives an award from Nichelle Nichols on the 30th anniversary of the Voyager launches, 2007

Stone was the director of Jet Propulsion Laboratory in Pasadena, California from 1991 to 2001. During his tenure, the Mars Pathfinder and its Sojourner rover were successful. Other JPL missions in the period included Mars Global Surveyor, Deep Space 1, TOPEX/Poseidon, NASA Scatterometer (NSCAT) [7] and the launches of Cassini, Stardust, and 2001 Mars Odyssey.