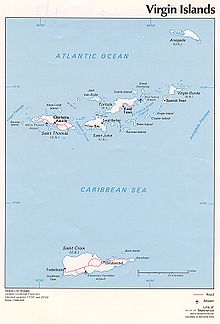 Map of the Virgin Islands

The Dutch Virgin Islands is the collective name for the enclaves that the Dutch West India Company had in the Virgin Islands. The area was ruled by a director, whose seat was not permanent. The main reason for starting a colony here was that it lay strategically between the Dutch colonies in the south ( Netherlands Antilles, Suriname) and New Netherland. The Dutch West India Company was mainly affected by the competition from Denmark, England and Spain. In 1680 the remaining islands became a British colony.

It was a Dutch privateer named Joost van Dyk who organised the first permanent settlements in the territory in Soper's Hole, on the west end of Tortola. It is not known precisely when he first came to the territory, but by 1615 van Dyk's settlement was recorded in Spanish contemporary records, noting its recent expansion. He traded with the Spaniards in Puerto Rico and farmed cotton and tobacco.

Some sources suggest that the first settlements in the Virgin Islands were by the Spanish, who mined copper at the copper mine on Virgin Gorda, but there is no archaeological evidence to support the existence of any settlement by the Spanish in the islands at any time, or any mining of copper on Virgin Gorda prior to the 19th century.

By 1625, van Dyk was recognised by the Dutch West India Company as the private "Patron" of Tortola, and had moved his operations to Road Town. During the same year, van Dyk lent some limited (non-military) support to the Dutch Admiral Boudewijn Hendricksz, who sacked San Juan, Puerto Rico. In September 1625, in retaliation, the Spanish led a full assault on the island of Tortola, laying waste to its defences and destroying its embryonic settlements. Joost van Dyk himself escaped to the island that would later bear his name, and sheltered there from the Spanish. He later moved to the island of St. Thomas until the Spanish gave up and returned to Puerto Rico.

Notwithstanding the Spanish hostility, the Dutch West India Company still considered the Virgin Islands to have an important strategic value, as they were located approximately halfway between the Dutch colonies in South America (now Suriname) and the most important Dutch settlement in North America, New Amsterdam (now New York City). Large stone warehouses were built at Freebottom, near Port Purcell (just east of Road Town), with the intention that these warehouses would facilitate exchanges of cargo between North and South America. 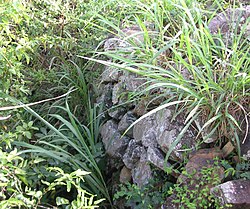 The remains of Fort Charlotte, built on an earlier lookout post erected by the Dutch

At this time, the Dutch settlers erected some small earthworks and a three- cannon fort above the warehouse, on the hill where Fort George would eventually be built by the English. He also constructed a wooden stockade to act as a lookout post above Road Town on the site that would eventually become Fort Charlotte. They also stationed troops at the Spanish "dojon" near Pockwood Pond, later to be known as Fort Purcell, but now ordinarily referred to as "the Dungeon".

In 1631, the Dutch West India Company expressed an interest in the copper which had been discovered on Virgin Gorda, and a settlement was set up on that island, which came to be known as "Little Dyk's" (now known as Little Dix).

In 1640, Spain attacked Tortola in an assault led by Captain Lopez. Two further attacks were made by the Spanish on Tortola in 1646 and 1647 led by Captain Fancisco Vincente Duran. The Spanish anchored a warship in Soper's Hole at West End and landed men ashore. They then sent another warship to blockade Road Harbour. After a team of scouts returned a safe report, the Spanish landed more men and attacked Fort Purcell overland by foot. The Dutch were massacred, and the Spanish soldiers then moved marched to Road Town, where they killed everyone and destroyed the settlement. They did not, apparently, attack the smaller settlements further up the coast in Baugher's Bay, or on Virgin Gorda.

The settlements were not ultimately an economic success, and the evidence suggests that the Dutch spent most of their time more profitably engaged in privateering than trading. The lack of prosperity of the territory mirrored the lack of commercial success of the Dutch West India Company as a whole.

The company changed its policy, and it sought to cede islands such as Tortola and Virgin Gorda to private persons for settlement, and to establish slave pens. The island of Tortola was eventually sold to Willem Hunthum at some point in the 1650s, at which time the Dutch West India Company's interest in the territory effectively ended.

In 1665, the Dutch settlers on Tortola were attacked by a British privateer, John Wentworth, who is recorded as having captured 67 slaves which were removed to Bermuda. This is the first official record of slaves being held in the Territory.

Until the mid-20th century, there was a Dutch Creole language spoken on the islands— Negerhollands—especially by people whose ancestors were slaves, and those who had worked on Dutch plantations. There are still some ruins to see, and the island of Jost Van Dyke is named after the Dutch pirate.