From Wikipedia, the free encyclopedia
Walking while partially squatting
For other uses, see Duck walk.

The duckwalk is a form of locomotion performed by assuming a low partial squatting position and walking forwards, maintaining the low stance. It is similar to stalking and prowling. [1] It is most widely known as a stage element of guitar showmanship popularized by rock 'n' roll guitarist Chuck Berry. [2] [3] It is also a physical exercise commonly used in military training.

Chuck Berry's other guitar playing stunt, his one-legged hop routine with the other leg waving in the air is also known as a duckwalk. [4]

While the origins of the duckwalk have been traced as far back as T-Bone Walker who already during the 1930s performed dance moves while playing his guitar, it was Chuck Berry who made the duckwalk popular and who is often credited as the inventor. He first used it as a child when he walked "stooping with full-bended knees, but with my back and head vertical" under a table to retrieve a ball and his family found it entertaining; he used it when "performing in New York for the first time and some journalist branded it the duck walk." [5] [6] Chuck Berry performs duckwalk in songs such as the 1956 "rock, rock, rock!" and 1973's "Sweet Little Rock and Roller". [7]

AC/DC guitarist Angus Young, whose musical style was heavily influenced by Chuck Berry, also does a duckwalk, in the form of a one-legged hop, in his shows. [8] 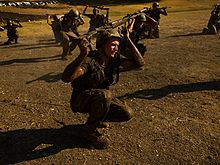 Airmen duck walk with their weapons held atop of their heads during the Air Force Pararescuemen Indoctrination "Hell Week" Course, September 6, 2011, Lackland Air Force Base, Texas.

This exercise is used to strengthen the ankles and thighs. It is also a test of balance, flexibility, and agility. [9]

The duckwalk is one out of 25 exercises in the physical test at United States Military Entrance Processing Command (MEPS). The duckwalk tests to see if a trainee is flat footed or if it hurts to perform the exercise. It also makes sure that the trainee has proper ranges of motion. Trainees who fail the duckwalk are temporarily suspended from MEPS and have to try again at a later date. [10] [11]