From Wikipedia, the free encyclopedia
(Redirected from Douglaston, Queens)
"Little Neck" redirects here. It is not to be confused with Littleneck.
Neighborhood of Queens in New York City

Douglaston–Little Neck is a neighborhood in the northeastern part of the New York City borough of Queens. The community is located on the North Shore of Long Island, bordered to the east by the region of Great Neck in Nassau County, to the south by Glen Oaks and the North Shore Towers, and to the west by Bayside.

The neighborhood is composed of two main sections. Little Neck is generally used to refer to the area east of Marathon Parkway and/or north of Northern Boulevard, while Douglaston is the rest of the neighborhood; these classifications may overlap depending on different interpretations of neighborhood boundaries. Each of these areas has several subsections. Douglaston–Little Neck represents one of the least traditionally urban communities in New York City, with many areas (particularly those north of Northern Boulevard) having a distinctly suburban feel, similar to that of Nassau County towns located nearby such as Great Neck.

The area is also known for its historical society and other civic groups, notably the Douglaston Civic Association and the Douglas Manor Association. There are two historic districts, Douglas Manor and Douglaston Hill, and two houses, Allen-Beville House and Cornelius Van Wyck House, listed on the National Register of Historic Places in the neighborhood. [3]

Douglaston is considered to be the area located west of Marathon Parkway and north of Grand Central Parkway. [8] According to The New York Times, Douglaston comprises six distinct neighborhoods. [7] Douglas Bay, [9] Douglas Manor, [10] and Douglaston Hill are located north of Northern Boulevard, on the peninsula abutting Little Neck Bay. [7] Douglas Manor takes up most of the peninsula located north of the Long Island Rail Road's Port Washington Branch, while Douglaston Hill takes up a small section between the LIRR and Northern Boulevard. [8] Douglaston Park is the area located between Northern Boulevard and Interstate 495 (I-495, the Long Island Expressway). Additionally, there are two areas south of I-495, Winchester Estates and an area simply called Douglaston. Winchester Estates is located west of Douglaston Park and the remainder of the area south of I-495 is without a distinct name other than Douglaston. [7]

The earliest known residents of the area that would become Douglaston–Little Neck were the Matinecock Native Americans. They were sustained by the seafood in Little Neck Bay. [12]

Early Dutch settlers were drawn to the area by the rich land and abundant fishing. In the 17th century, European settlers began arriving in the area for its conveniently located harbor. Soon after, the British and Dutch gained control of the Matinecock lands peacefully, except for a small area known as Madnan's Neck (possibly a shortened form of Native American name for the area, Menhaden-ock, or "place of fish"). [13] Thomas Hicks, of the Hicks family that eventually founded Hicksville, and a band of armed settlers forcibly drove out the Matinecock in a battle at today's Northern Boulevard and Marathon Parkway. [14]

In 1796, Hicks's estate passed to Thomas Wickes (1770–1854), and in 1819, to Wyant Van Zandt, a wealthy merchant, who built a large Greek Revival mansion in the area. Today, this mansion houses the Douglaston Club, a private club with tennis courts, social activities and swimming pools. In 1835, George Douglas bought 240 acres (0.97 km2) of land along with Van Zandt's mansion. Upon Douglas' death in 1862, the land was inherited by his son, William Douglas.

Douglaston Hill is the oldest area of the community, and is characterized by turn-of-the-20th-century homes in Queen Anne and Victorian styles. It was laid out with very large lots in 1853, at the very beginning of a movement in the United States to create suburban gardens. The area was recognized as a New York City Historic District in December 2004 by the New York City Landmarks Preservation Commission. [15] The Douglaston Hill Historic District was listed on the National Register of Historic Places in 2000. [3]

The settlers thrived producing produce for the Manhattan market and the area was used as a dock on Little Neck Bay. The Little Neck and Douglaston stations opened in 1866 on the North Shore Railroad (now the Long Island Rail Road's Port Washington Branch and the same line featured prominently in the famous F. Scott Fitzgerald novel The Great Gatsby) to serve the community and the dock area. [6] Northern Boulevard was developed into a commercial and cultural hub, and the Little Neck Theater, a 576-seat movie theater, was opened in 1929 at the intersection of Northern Boulevard and Morgan Street. [16] [17] The theater was closed in 1983. [18]

From the 1860s through the 1890s, small hard clams (quahogs) from Little Neck Bay were served in the best restaurants of New York and several European capitals. [19] Eventually, the term " littleneck" or " littleneck clam" came to be used as a size category for all hard clams, regardless of origin. [20] [21]

In the early 20th century, the Rickert-Finlay Realty Company of Manhattan purchased 175 acres (0.71 km2) of the Douglas' family holdings, and formed the Douglas Manor Association, creating a planned community. Many of the houses in this area were built in architectural styles popular at the time, such as Tudor, Mediterranean, Colonial Revival, and Arts and Crafts. In 1997, New York City's Landmarks Preservation Commission designated Douglas Manor as the Douglaston Historic District, ensuring that no new buildings or external alterations could be made without the commission's approval. [22] [23] The Douglaston Historic District was listed on the National Register of Historic Places in 2005. [3]

An old Matinecock cemetery remained on Northern Boulevard between Cornell Lane and Jesse Court. One of the last photographs of the cemetery was taken by the Daily News in August 1931, a few months before it was removed to make room for a widened Northern Boulevard. [24] The remains from the cemetery were moved to the Zion Episcopal Church of Douglaston and placed under a stone marker that reads "Here rest the last of the Matinecoc." [25]

Other areas of Douglaston–Little Neck were developed during the latter half of the 20th century. Douglaston Park contains a mixture of large, older homes as well as Capes, Tudors, and ranch-style homes dating from the 1960s. The areas adjacent to the Douglaston Shopping Center are occupied mainly by attached single-family homes built in the 1950s through 1970s (Beech Hills, Deepdale, and another development known colloquially as the "Korvette's Houses" due to the former proximity of an E.J. Korvette department store), as well as four-story condominiums added in the mid-1980s. [7]

Every year Douglaston–Little Neck hosts a Memorial Day Parade which runs from Great Neck to Douglaston Parkway along Northern Boulevard. [32]

A local volunteer ambulance corps, the Little Neck–Douglaston Community Ambulance Corps is supported and run by people in the community. It hosts blood drives and free classes to teach the community CPR.

The First Tuesday in August also marks National Night Out, a community building event in Douglaston, held at the Douglaston Plaza. The event is held by the NYPD, in efforts to build a stronger community. The event features bouncy houses, barbecues, raffles, music, face-painting and free medical check ups. [33]

Douglaston–Little Neck has many independently owned and operated restaurants and shops, many of which are located in the area around the intersection of Douglaston Parkway or Little Neck Parkway and Northern Boulevard. This area is home to a distinct cultural presence and traditional New York City-style pizzerias, delis, and bodegas.

The Douglaston Plaza Shopping Center is a major hub of the community's economic activity. It contains a Fairway Market supermarket (which opened in November 2011 though previously had been occupied by many other chains), and a Burger King. Toys "R" Us, Macy's, Modell's, and Movieworld Cinemas all left in 2018, followed by Grimaldis Pizza leaving in 2019.

The FDNY EMS Training Academy is located in Bay Terrace at Fort Totten. The site also contains a museum of FDNY EMS history. [38] 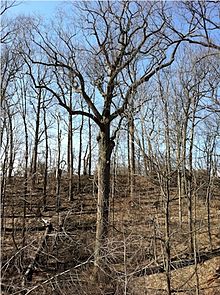 The Queens Giant measures 133.8 feet (40.8 m) tall and is probably the oldest living thing in the New York metropolitan area.

Several parks are under the administration of the New York City Department of Parks and Recreation. Along the western waterfront is Alley Pond Park, a 635-acre (2.57 km2) wildlife and bird sanctuary, and home to the Queens Giant, the oldest known tree (and living thing) in New York City. To the east along the water is Udalls Cove, a 90-acre (360,000 m2) wildlife sanctuary.

Because northern Douglaston–Little Neck is surrounded by water, many residents take advantage of the waterfront. The Douglaston Yacht Squadron [44] is the local yacht club (there is also a junior yachting program called Douglaston Junior Sailing (DJYS), which teaches youngsters under the age of 16 years how to sail). It is a part of the Douglaston Club, a country club based in Douglas' original mansion in Douglas Manor. The Douglaston Club is also site of various community events, such as the Douglaston Chess Congress' annual championships, which decides the community's best players. Tennis is also a popular sport in the neighborhood.

Southern Douglaston–Little Neck has an 18-hole, par 67 golf course. Formerly known as the North Hills Country Club, the 104-acre (0.42 km2) course opened in 1927 and became a municipal course in the 1960s. The Douglaston Park Golf Course underwent significant renovations in 2004. The course is situated at one of the highest points in the borough of Queens, providing views of the Manhattan skyline, and has a restaurant. 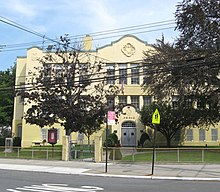 Douglaston–Little Neck and Bayside generally have a higher rate of college-educated residents than the rest of the city as of 2018 [update]. The majority (52%) of residents age 25 and older have a college education or higher, while 11% have less than a high school education and 37% are high school graduates or have some college education. By contrast, 39% of Queens residents and 43% of city residents have a college education or higher. [28]:6 The percentage of Douglaston–Little Neck and Bayside students excelling in math rose from 70% in 2000 to 88% in 2011, though reading achievement stayed at around 73% during the same time period. [45] 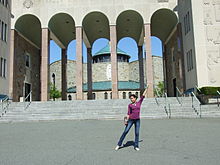 Cathedral College of the Immaculate Conception in Douglaston

Divine Wisdom Catholic Academy [52] is a private Catholic school, with classes from the pre-school level to 8th grade. The Immaculate Conception Center, [53] formerly a college-level seminary named Cathedral College of the Immaculate Conception and owned by the Roman Catholic Diocese of Brooklyn, is located in southern Douglaston. It is a large conference center, hosting Diocese events and activities including language immersion classes, lay ministry preparation, adult continuing education, seminarian instruction, parish retreats, and also hosts community civic conferences. In the Fall of 2011, all administrative offices were relocated and the building hosted eighty undergraduate seminarians studying at nearby St. John's University, in addition to retired priests from the Diocese of Brooklyn.

Though there are no New York City Subway stations near Douglaston–Little Neck, the neighborhood is served by MTA Regional Bus Operations' Q12, Q30 and Q36 local buses, which connect to the subway. In addition, the QM3, QM5, QM8 and QM35 express buses provide direct service to Manhattan, while the n20G bus provides closed-door bus service between the neighborhood and nearby Great Neck. [59]

The area is served by the Little Neck Ledger, owned by the TimesLedger Newspapers, [60] a chain of 14 weekly newspapers spread throughout Queens. Media giant News Corporation, which also owns the New York Post, bought TimesLedger in October 2006.

Scenes from the movies American Gangster, Black Rain, Little Children, The Arrangement, I Never Sang for My Father, Cops and Robbers, and After-Life were filmed in the community. The films Rabbit Hole (2010), Son of No One (2011), and Run All Night (2014) were shot in Douglaston–Little Neck.

In the 30 Rock episode "Hiatus", the community stood in for Needmore, Pennsylvania. Mary Hudson, a character in "The Laughing Man", a short story by J. D. Salinger, is from this community. "Machine", the masked character from the 1999 film 8mm, lived with his mother in Douglaston–Little Neck and some of the film was shot in the neighborhood.

The Zion Episcopal Church was the setting for the movie First Reformed starring Ethan Hawke as well as the television series The Blacklist. [89]