The desert climate or arid climate (in the Köppen climate classification BWh and BWk), is a climate in which there is a severe excess of evaporation over precipitation. The typically bald, rocky, or sandy surfaces in desert climates are dry and hold little moisture, quickly evaporating the already little rainfall they receive. Covering 14.2% of earth's land area, hot deserts are the second most common type of climate on earth [1] after the polar climate.

Most desert/arid climates receive between 25 and 200 mm (1 and 8 in) of rainfall annually, [3] [4] although some of the most consistently hot areas of Central Australia, the Sahel and Guajira Peninsula can be, due to extreme potential evapotranspiration, classed as arid with the annual rainfall as high as 430 millimetres or 17 inches.

Although no part of Earth is known for certain to be absolutely rainless ever, in the Atacama Desert of northern Chile, the average annual rainfall over a period of 17 years was only just 5 millimetres (0.20 in). Some locations in the Sahara Desert such as Kufra, Libya record an even drier 0.86 mm (0.034 in) of rainfall annually. The official weather station in Death Valley, United States reports 60 mm (2.4 in) annually, but in a 40-month period between 1931 and 1934 a total of 16 mm (0.63 in) of rainfall was only measured.

Hot desert climates (BWh) are typically found under the subtropical ridge in the lower middle latitudes or the subtropics, often between 20° and 33° north and south latitudes. In these locations, stable descending air and high pressure aloft clear clouds and create hot, arid conditions with intense sunshine. Hot desert climates are found across vast areas of North Africa, Western Asia, northwestern parts of the Indian Subcontinent, interior Australia, and smaller areas of the Southwestern United States, and Chile. This makes hot deserts present in every continent except Antarctica, with Almería in Southern Spain also having this climate.

At the time of high sun (summer), scorching, desiccating heat prevails. Hot-month average temperatures are normally between 29 and 35 °C (84 and 95 °F), and midday readings of 43–46 °C (109–115 °F) are common. The world absolute heat records, over 50 °C (122 °F), are generally in the hot deserts, where the heat potential can be the highest on the planet. This includes the record of 56.7 °C (134.1 °F) in Death Valley, which is currently considered the highest temperature recorded on Earth. [6] Some desert in the tropics consistently experience very high temperatures all year long, even during wintertime. These locations feature some of the highest annual average temperatures recorded on Earth, exceeding 30 °C (86 °F). This last feature is seen in sections of Africa and Arabia. During colder periods of the year, night-time temperatures can drop to freezing or below due to the exceptional radiation loss under the clear skies. However, very rarely do temperatures drop far below freezing under the cold subtype. 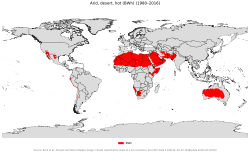 Hot deserts are lands of extremes: most of them are among the hottest, the driest and the sunniest places on Earth because of nearly constant high pressure; the nearly permanent removal of low-pressure systems, dynamic fronts and atmospheric disturbances; sinking air motion; dry atmosphere near the surface and aloft; the exacerbated exposure to the sun where solar angles are always high makes this desert inhospitable to most species.

Cold desert climates are typically located in temperate zones, usually in the leeward rain shadow of high mountains, which restricts precipitation from the westerly winds. An example of this is the Patagonian Desert in Argentina bounded by the Andes ranges to its west. In the case of Central Asia, mountains restrict precipitation from the eastern monsoon. The Kyzyl Kum, Taklamakan and Katpana Desert deserts of Central Asia are other major examples of BWk climates. The Ladakh region, and the city of Leh in the Great Himalayas in India also have a cold desert climate. In North America the cold desert climate occurs in the drier parts of the Great Basin Desert and in the Bighorn Basin in Big Horn and Washakie Counties in Wyoming. The Hautes Plaines, located in the northeastern section of Morocco and in Algeria is another major example of a cold desert climate. The Absheron Peninsula in eastern Azerbaijan is also an example of a cold desert climate.

Arctic and Antarctic regions also receive very little precipitation during the year, owing to the exceptionally cold dry air freezing most precipitation ; however, both of them are generally classified as having polar climates because they have average summer temperatures below 10 °C (50 °F) even if they have such desert-like features as intermittent streams, hypersaline lakes, and extremely barren terrain in unglaciated areas such as the McMurdo Dry Valleys of Antarctica. [9] [10]