Denizli is an industrial city in the southwestern part of Turkey and the eastern end of the alluvial valley formed by the river Büyük Menderes, where the plain reaches an elevation of about three hundred and fifty metres (1,148 ft). Denizli is located in the country's Aegean Region.

The city has a population of about 646,278 (2018 census). This is a jump from 389,000 in 2007, due to the merger of 13 municipalities and 10 villages when the area under Denizli Municipality jurisdiction increased almost fivefold and the population around 50 percent. Denizli (Municipality) is the capital city of Denizli Province.

Denizli has seen economic development in the last few decades, mostly due to textile production and exports. [5] [6]

The ancient ruined city of Hierapolis, as well as ruins of the city of Laodicea on the Lycus, the ancient metropolis of Phrygia, are nearby. Also in the depending of Honaz, about 10 mi (16 km) west of Denizli is, what was, in the 1st century AD, the city of Colossae.

The weather is hot in Denizli in summers, whereas in winters, it may occasionally be very cold with snow on the mountains that surround the city. Some years, snow can be observed in the urban areas. Springs and autumns are rainy, mild climate, warm.

The word deniz means 'sea, large lake'. No sea or lake can be found near Denizli. However, the original Turkish name for the place was Tonguzlu, pronounced as toŋuzlu or doŋuzlu, later donuzlu (from toŋuz ' wild boar'). Thus Tonguzlu means a 'place where boars dwell'. Because of the phonetical process (t->d, ŋ->n), the name was changed into denizlü or denizli, similar in pronunciation but different in meaning, in order to avoid the connotation 'boar, pig', which is offensive to Muslims. [7] Ibn Battuta recorded that the city was called Dun Ghuzluh. The latter is said to mean 'the town of the swine'. [8]

Hierapolis is a main tourism attraction in Denizli.

Pamukkale is a main tourism attraction in Denizli.

In antiquity, it was an important Greek town, called Attouda (Αττούδα), that existed through the ancient Greek and Roman eras; it was near the cities ( Hierapolis and Laodicea on the Lycus) and flourished through the Byzantine period.

The city was conquered by the Seljuk Turks. The inhabitants of Laodicea were also resettled here in the Seljuk period. [9]

Ibn Battuta visited the city, noting that "In it there are seven mosques for the observance of Friday prayers, and it has splendid gardens, perennial streams, and gushing springs. Most of the artisans there are Greek women, for in it are many Greeks who are subject to the Muslims and who pay dues to the sultan, including the jizyah, and other taxes." [10]

In the 17th century, the Turkish traveler Evliya Çelebi visited Denizli and recorded the town as follows: "The city is called by Turks as (Denizli) (which means has abundant of water sources like sea in Turkish) as there are several rivers and lakes around it. In fact it is a four-day trip from the sea. Its fortress is of square shape built on flat ground. It has no ditches. Its periphery is 470 steps long. It has four gates. These are: painters gate in North, saddle-makers gate in the East, new Mosque gate in the South, and vineyard gate in the West. There are some fifty armed watchmen in the fortress, and they attend the shop. The main city is outside the fortress with 44 districts and 3600 houses. There are 57 small and large mosques and district masjids, 7 madrasahs, 7 children's schools, 6 baths and 17 dervish lodges. As everybody lives in vineyards the upper classes and ordinary people do not flee from each other."[ citation needed]

The city lived in peace for centuries without being involved in wars in a direct manner. Following World War I during the Independence War, the Greek forces managed to come as close as Sarayköy, a small town 20 km (12 mi) northwest of Denizli, but did not venture into Denizli. The most widespread symbols of Denizli province are of textile industry.[ citation needed]

Denizli has a Mediterranean climate ( Köppen: Csa or Trewartha: Cs), with hot, dry summers and mild to cool, rainy winters. The inland areas, like Çardak, Bozkurt, Çivril, and Çal districts/counties of the province are cooler and have a higher elevation than the seaside, western part of the Province. Therefore, there are climatic differences within the province and even in the Denizli urbanized area.[ citation needed] The land is open to winds coming from the Aegean Sea as the mountains are perpendicular to the coastline.

View of Denizli from a hill 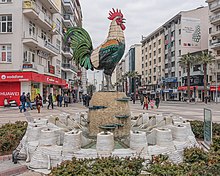 Rooster is the symbol of the city

Denizli Çardak Airport is about 45 minutes drive from the city center.

The extension of İzmir-Aydın highway to Denizli has been announced for several years. Initial infrastructure was laid in Aydın, but the rest is still forthcoming. The present Aydın-Denizli road, has a very high level of traffic, especially trucks, with each town along the road possessing its own industrial zone.

Lower station of the cableway (Teleferik) in Denizli

Denizli is twinned with: