From Wikipedia, the free encyclopedia
(Redirected from Delis)
For other uses, see Delicatessen (disambiguation). 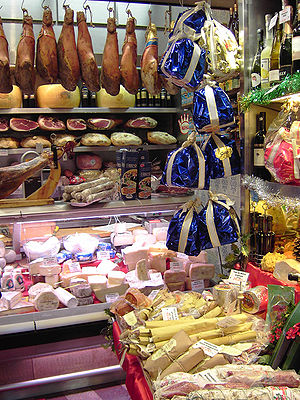 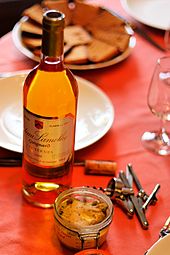 Delicatessen is a German loanword which first appeared in English in the late 19th century and is the plural of Delikatesse. [1] The German form was lent from the French délicatesse, which itself was lent from Italian delicatezza, from delicato, of which the root word is the Latin adjective delicatus, meaning "giving pleasure, delightful, pleasing". [1] The first Americanized short version of this word, deli, came into existence probably after World War II (first evidence from 1948). [2]

The German food company Dallmayr is credited with being the first delicatessen created. In 1700, [3] it became the first store to import bananas, mangoes, and plums to the German population from faraway places such as the Canary Islands and China. Over 300 years later, it remains the largest business of its kind in Europe. [4]

The first delicatessens to appear in the United States were in New York City in the early 1880s, with the first advertised use of this word occurring in early 1884 in St. Louis, Missouri upon the opening of "Sprague's Delicatessen," [5] at first one lunchroom and eventually five popular downtown lunch establishments operating between 1884 and 1906. [6] Early delicatessens in New York catered to the German immigrant population living there. [7] As the German-Jewish population increased in New York City during the mid- to late 1800s, kosher delicatessens began to open; the first was founded in 1889. [7] [8] [9] In the United States, by the late 20th to early 21st centuries, supermarkets, local economy stores, and fast food outlets began using the word (often abbreviated as "deli") to describe sections of their stores. [10] The decline of the deli as an independent retail establishment was most noted in New York City: from a high in the 1930s of about 1,500 Jewish delicatessens, only 15 still existed in 2015. [11]

By country and region 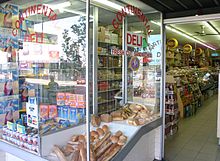 In most of Australia, the term "delicatessen" retains its European meaning of high-quality, expensive foods and stores. Large supermarket chains often have a deli department, and independent delicatessens exist throughout the country. Both types of deli offer a variety of cured meats, sausages, pickled vegetables, dips, breads and olives.[ citation needed]

In South Australia and Western Australia, "deli" also denotes a small convenience store or milk bar, and some businesses use "deli" as part of their business name. Traditional delicatessens also exist in these states, with "continental delicatessen" sometimes used to indicate the European version.[ citation needed]

In Canada, both meanings of "delicatessen" are used. Customers of European origin often use the term in a manner consistent with its original German meaning but, as in the United States, a deli can be a combined grocery store and restaurant.[ citation needed] 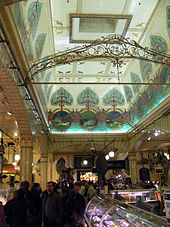 The fish counter at Harrods in London 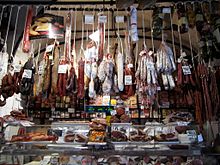 In Europe "delicatessen" means high-quality, expensive foods, and stores. In German-speaking countries a common synonym is Feinkost (fine food), and shops that sell it are called Feinkostläden (delicacy stores). Department stores often have a Delikatessenabteilung (delicacy department). European delicatessens include Fauchon in Paris, Dallmayr in Munich, Julius Meinl am Graben in Vienna, Harrods [12] [13] and Fortnum & Mason in London, Peck in Milan, and Jelmoli in Zürich.

Although U.S.-style delicatessens are also found in Europe, they appeal to the luxury market. In Russia, shops and supermarket sections approximating U.S.-style delis are called kulinariya and offer salads and main courses. Delicate meats and cheeses, cold-cut and sliced hot, are sold in a separate section. The Eliseevsky food store in central Moscow, with its fin de siècle decor, is similar to a European delicatessen. From the Tsarist era, it was preserved by the Soviets as an outlet for difficult-to-obtain Russian delicacies. Delicatessens may also provide foods from other countries and cultures that are not readily available in local food stores.[ citation needed] In Italy, the deli can be called gastronomia, negozio di specialità gastronomiche, bottega alimentare and more recently salumeria. In France it is known as a traiteur or épicerie fine. 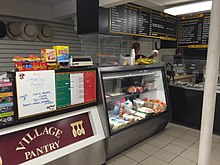 A typical deli in Pennsylvania, in the United States

In the United States, a delicatessen (or deli) is often a combined grocery store and restaurant, although the term may also be used for a strictly take-out or sit-down restaurant.[ citation needed] Delis offer a broader, fresher menu than fast-food chains,[ citation needed] rarely employing fryers (except for chicken) and routinely preparing sandwiches to order. They may also serve hot foods from a steam table, similar to a cafeteria. Although delicatessens vary in size, they are typically smaller than grocery stores.[ citation needed]

Menus vary according to regional ethnic diversity. Although urban delis rely on ethnic meats (such as pastrami, corned beef, and salami), supermarket delis rely on meats similar to their packaged meats (primarily ham, turkey, and American bologna).[ citation needed] American delicatessen distribution is primarily in older, pedestrian-friendly cities.[ citation needed] Delicatessens from a number of cultures can be found. In the United States, many are Italian, Greek, or Jewish, both kosher and " kosher style". The American equivalent of a European delicatessen may be known as a gourmet food store.