From Wikipedia, the free encyclopedia
Further information: Deindustrialisation by country
Process of reduction of industrial activity 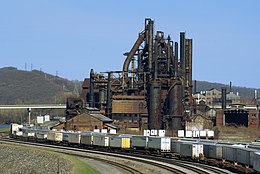 The Bethlehem Steel plant in Bethlehem, Pennsylvania was one of the world's leading steel manufacturers for most of the 20th century. In 1982, it discontinued most of its operations, declared bankruptcy in 2001, and was dissolved in 2003.

Deindustrialization is a process of social and economic change caused by the removal or reduction of industrial capacity or activity in a country or region, especially of heavy industry or manufacturing industry.

There are different interpretations of what deindustrialization is. Many associate American deindustrialization with the mass closing of automaker plants in the now so-called Rust Belt between 1980 and 1990. [1] [2] The US Federal Reserve raised interest and exchange rates beginning in 1979, and continuing until 1984, which automatically caused import prices to fall. Japan was rapidly expanding productivity during this time, and this decimated the US machine tool sector. A second wave of deindustrialization occurred between 2001 and 2009, culminating in the automaker bailout of GM and Chrysler.

Research has pointed to investment in patents rather than in new capital equipment as a contributing factor. [3] At a more fundamental level, Cairncross and Lever offer four possible definitions of deindustrialization: [4] [5] 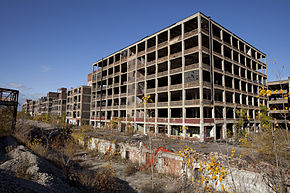 The former Packard Automotive Plant in Detroit is one of the most recognizable symbols of the decline of the city's once vibrant automotive industry.

Theories that predict or explain deindustrialization have a long intellectual lineage. Rowthorn [6] argues that Marx's theory of declining (industrial) profit may be regarded as one of the earliest. This theory argues that technological innovation enables more efficient means of production, resulting in increased physical productivity, i.e., a greater output of use value per unit of capital invested. In parallel, however, technological innovations replace people with machinery, and the organic composition of capital increases. Assuming only labor can produce new additional value, this greater physical output embodies a smaller value and surplus value. The average rate of industrial profit therefore declines in the longer term.

George Reisman [9] identified inflation as a contributor to deindustrialization. In his analysis, the process of fiat money inflation distorts the economic calculations necessary to operate capital-intensive manufacturing enterprises, and makes the investments necessary for sustaining the operations of such enterprises unprofitable.

Institutional arrangements have also contributed to deindustrialization such as economic restructuring. With breakthroughs in transportation, communication and information technology, a globalized economy that encouraged foreign direct investment, capital mobility and labor migration, and new economic theory's emphasis on specialized factor endowments, manufacturing moved to lower-cost sites and in its place service sector and financial agglomerations concentrated in urban areas. [10] [11]

The term deindustrialization crisis has been used to describe the decline of labor-intensive industry in a number of countries and flight of jobs away from cities. One example is labor-intensive manufacturing. After free-trade agreements were instituted with less developed nations in the 1980s and 1990s, labor-intensive manufacturers relocated production facilities to third world countries with much lower wages and lower standards. In addition, technological inventions that required less manual labor, such as industrial robots, eliminated many manufacturing jobs.