Hogarth was commissioned into the Royal Naval Volunteer Reserve during the First World War, and served with the Naval Intelligence Division. During 1916, he was the acting director of the Arab Bureau, and was later responsible for delivering the Hogarth message.

D. G. Hogarth was the son of Reverend George Hogarth, Vicar of Barton-upon-Humber, and Jane Elizabeth (Uppleby) Hogarth. He had a sister three years younger, Janet E. Courtney, an author and feminist. In one of his autobiographical works, Hogarth claimed to be an antiquary who was made so, rather than born to it. He said, "nothing disposed me to my trade in early years." Those years included a secondary education, 1876–1880, at Winchester College, which claims to be, and was labelled by Hogarth as, "our oldest Public School." [1] 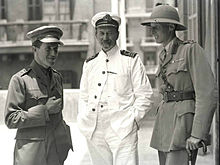 In 1915, during the First World War, Hogarth was commissioned with the temporary rank of lieutenant commander in the Royal Naval Volunteer Reserve [9] and joined the Geographical Section of the Naval Intelligence Division. Professor Hogarth was appointed the acting director of the Arab Bureau, for a time during 1916 when Sir Mark Sykes went back to London. Kinahan Cornwallis was his deputy.[ citation needed] Hogarth was close with T. E. Lawrence and worked with Lawrence to plan the Arab Revolt. [10]

Sykes befriended Hogarth, who had described India Government as believing they had a moral imperative to the British Raj as the best form of government and could not fail in their duty to impose it on a Province of Mesopotamia. The Arabists rejected this proposal vehemently; Sykes taking Hogarth's research as evidence of the uniquely different situation in the protectorate. The archaeologists knew it was clear that the Raj had no understanding of the different conditions, that there needed to be a specific "Arab Policy" for what had become a frontier of empire. [11]

On 7 November 1894, Hogarth married Laura Violet Uppleby, daughter of George Charles Uppleby. [13] His wife and mother shared a common great great grandfather, one John Uppleby of Wootton, Lincolnshire. [14] Laura Violet was 26 at the time; David George, 32. They had one son, William David Hogarth (1901–1965). [15] A granddaughter, Caroline Barron, is a historian of later medieval England. [16]

In 1896, Hogarth was elected a Fellow of the Royal Geographical Society (FRGS). [2] In 1905, he was elected a Fellow of the British Academy (FBA), the United Kingdom's national academy for the humanities and social sciences. [3] In 1917, he was made a Commander of the Order of the Nile by the Sultan of Egypt, [3] and awarded the Founder's Medal of the Royal Geographical Society. [2] In the 1918 New Year Honours, he was appointed a Companion of the Order of St Michael and St George (CMG) for his efforts during the First World War. [17] In 1919, he was awarded the Order of Nahda (Hejaz) 2nd class by Hussein bin Ali, Sharif of Mecca. [3]

With Hogarth as editor

Wikisource has original works by or about:
David George Hogarth
Retrieved from " https://en.wikipedia.org/?title=David_George_Hogarth&oldid=1137248962"
Categories:
Hidden categories: