Dade County is a county in the U.S. state of Georgia. It occupies the northwest corner of Georgia, and the county's own northwest corner is the westernmost point in the state. As of the 2010 census, the population is 16,633. [1] The county seat and only incorporated municipality is Trenton. [2] Dade County is part of the Chattanooga, TN–GA Metropolitan Statistical Area. In 1860, residents of Dade County voted to secede from the state of Georgia and from the United States, but no government outside the county ever recognized this gesture as legal. In 1945, the county symbolically "rejoined" Georgia and the United States. [3]

Dade County was established in 1837 and was named for Major Francis Langhorne Dade, who was killed in the Dade Massacre by Seminole Indians in December 1835. [4] [5] The first settlers of Dade County won the land in the Georgia Land Lotteries, held to encourage settlement after the Cherokee people were forced off the land. Many settlers worked in regional coke and coal mines that contributed to development of the Chattanooga, Tennessee area.

The area was long isolated by its geography of mountains and rivers, which some historians say contributed to early residents' separatist attitudes. For the first century of Dade County's existence, no road connected it directly to the rest of Georgia, so visitors from elsewhere in the state had to reach it by way of Alabama or Tennessee. That changed in 1939 with the establishment of Cloudland Canyon State Park, and Georgia began work on Highway 136 to connect U.S. 41 to the recently created park. [6] The Civilian Conservation Corps built many of the facilities and access roads to the park.

Dade County had a short-lived state secessionist movement before the American Civil War. In 1860, county residents wanted to secede from the Union, but lawmakers for the state of Georgia were cautious. Legend has it that in 1860, the people of Dade County were so impatient that they announced their own secession from both Georgia and the United States. [7] On July 4, 1945, a telegram from President Harry S. Truman was read at a celebration marking the county's "rejoining" the Union. Historians say Dade's individual secession and readmission were symbolic and had no legal effect. They say that officially, Dade County seceded along with the state of Georgia in 1861 and re-entered the Union with the state in 1870. [8] [9]

The noted Southern humorist, author and seminal writer of Southern humor George Washington Harris (1814-1869) is buried in the Brock Cemetery in Trenton. Although he greatly influenced the literary works of Mark Twain, William Faulkner, [10] and Flannery O'Connor, [11] his grave was not verified and given a marker until 2008.

In 1964, Covenant College established a campus at Lookout Mountain. Founded in 1955 in California, it was ready to expand after a year. Several professors led Covenant to move to St. Louis, Missouri, where it developed for eight years. After outgrowing its facilities there, the college decided to move to Dade County. 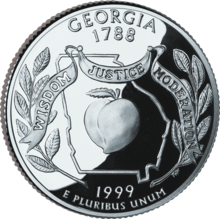 Shortly after the Georgia State Quarter was released by the US Mint, Dade County gained attention because of an apparent mistake in the design. As shown on the quarter, the state appears to lack Dade County, in the extreme northwestern part of the state. Some accounts in 2012 suggest the exclusion was intended to refer to the local legend of Dade County's secession from Georgia. [12]

Dade County lies just south of Nickajack Lake on the Tennessee River, which was created by the Nickajack Dam, constructed by the Tennessee Valley Authority. The city of Atlanta, Georgia wanted to gain rights to the water in Nickajack Lake to supplement their sources from Lake Lanier and Lake Allatoona. In addition, in 2008 Georgia lawmakers wanted to change the Tennessee-Georgia state line, as they say it is based on a flawed 1818 survey, which mistakenly placed Georgia's northern line just short of the Tennessee River. [25] [26] Changing the boundary would give Georgia rights to the water, but they were unsuccessful.

Although it contained many opponents of the Confederacy during the Civil War, Dade County – unlike more easterly Fannin, Towns, Pickens and Gilmer – is a typical “ Solid South” county in its political history. It voted Democratic in every presidential election until 1964, when hostility towards civil rights for blacks turned the county towards conservative Republican Barry Goldwater. Since then, only twice has a Republican presidential candidate lost Dade County: when segregationist former and future Alabama Governor George Wallace carried the county in 1968 and when favorite son Jimmy Carter won in 1976. In 1972, Dade was Richard Nixon’s strongest county nationwide in his 2,900-plus-county landslide over George McGovern, [27] and since 1984 no Democratic presidential candidate has reached 38 percent of the county’s vote. Typical for the rural white south, Hillary Clinton received only 15.5 percent of the county’s vote in 2016.