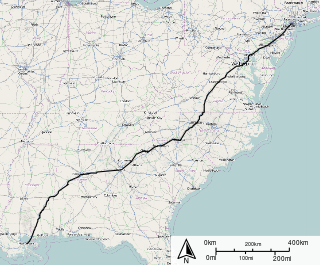 The Crescent is a daily long-distance passenger train operated by Amtrak in the eastern United States. It operates 1,377 miles (2,216 km) daily between Pennsylvania Station in New York City and Union Passenger Terminal in New Orleans as train numbers 19 and 20. Major service stops outside the Northeast Corridor include Birmingham, Ala.; Atlanta, Ga.; and Charlotte, N.C..

During the interwar period, the Crescent, like the Southern's other major trains, was powered south of Washington by the celebrated Ps-4 class 4-6-2 ("Pacific") locomotives. After World War II, it was powered by General Motors' Electro-Motive Division (EMD) E8 locomotives and FP-7 cab and booster units, in sets of two to five (total 3,000–9,000 hp or 2,200–6,700 kW).

In 1970, Southern's railway partners sought to discontinue passenger services, Southern Railway merged its two remaining New York-New Orleans sleepers, the original Crescent and the Southerner, as the Southern Crescent. The two trains had generally shared the same route from New York to Atlanta, but diverged between Atlanta and New Orleans. The Crescent took a coastal route over Atlanta and West Point Railroad, Western Railway of Alabama and Louisville and Nashville Railroad trackage between New Orleans and Atlanta via Mobile and Montgomery; the Southerner stayed inland to run exclusively on Southern Railway trackage through Birmingham. For the combined Southern Crescent, Southern moved the train to the Birmingham route instead of the Mobile route. Although the Birmingham route was slightly less direct than the more coastal Mobile/Montgomery route, it afforded Southern the dispatch reliability of moving the train exclusively over its own right of way between Washington to New Orleans, and also allowed Southern to maintain its passenger service standards. The train was numbered 1 southbound and 2 northbound. Penn Central carried the Southern Crescent between Washington and New York along the Northeast Corridor, inheriting the longstanding haulage agreement from the Pennsylvania Railroad. For most of the 1970s, the Crescent was supplemented by the Piedmont Limited, a former New York-New Orleans train that had been cut back to a regional Atlanta-Washington (later Charlotte-Washington and Salisbury-Washington) service running along the middle leg of the Southern Crescent route.