From Wikipedia, the free encyclopedia
(Redirected from Container cargo)
Type of port 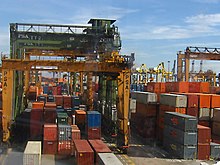 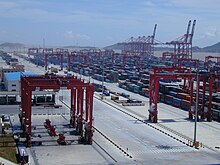 In November 1932, the first inland container port in the world was opened by the Pennsylvania Railroad company in Enola, Pennsylvania. [1]

Port Newark-Elizabeth on the Newark Bay in the Port of New York and New Jersey is considered the world's first maritime container port. On April 26, 1956, the Ideal X was rigged for an experiment to use standardized cargo containers that were stacked and then unloaded to a compatible truck chassis at Port Newark. The concept had been developed by the McLean Trucking Company. On August 15, 1962, the Port Authority of New York and New Jersey opened the world’s first container port, Elizabeth Marine Terminal. [2]

It is common for cargo that arrives to a container port in a single ship to be distributed over several modes of transportation for delivery to inland customers. According to a manager from the Port of Rotterdam, it may be fairly typical way for the cargo of a large 18,000 TEU container ship to be distributed over 19 container trains (74 TEU each), 32 barges (97 TEU each) and 1,560 trucks (1.6 TEU each, on average). [3] The further container terminal, in April 2015, such APM Terminal Maasvlakte II, that adapts the advanced technology of remotely-controlled STS gantry cranes and conceptions of sustainability, renewable energy, and zero carbon dioxide emission. [4]

In recent years methodological advances regarding container port operations have considerably improved, such as container port design process. For a detailed description and a comprehensive list of references see, e.g., the operations research literature. [5] [6]

Pier T Container Terminal in Long Beach, California, U.S. with intermodal rail in the foreground and gantry cranes behind that