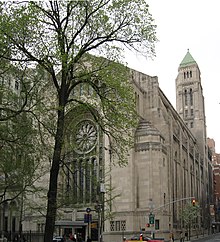 Temple Emanu-El of New York used by the congregation.

The congregation currently comprises approximately 2,000 families and has been led by Senior Rabbi Joshua M. Davidson since July 2013. [1] The congregation is located at 1 East 65th Street on the Upper East Side of Manhattan. The Temple houses the Bernard Museum of Judaica, the congregation's Judaica collection of over 1,000 objects. 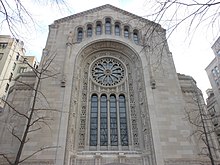 The congregation was founded by 33 mainly German Jews who assembled for services in April 1845 in a rented hall near Grand and Clinton Streets in Manhattan's Lower East Side. The first services they held were highly traditional. The Temple (as it became known) moved several times as the congregation grew larger and wealthier.

In October 1847, the congregation relocated to a former Methodist church at 56 Chrystie Street. The congregation commissioned architect Leopold Eidlitz to draw up plans for renovation of the church into a synagogue. [2] Radical departures from Orthodox religious practice were soon introduced to Temple Emanu-El, setting precedents which proclaimed the principles of 'classical' Reform Judaism in America. In 1848, the German vernacular spoken by the congregants replaced the traditional liturgical language of Hebrew in prayer books. Instrumental music, formerly banished from synagogues, was first played during services in 1849, when an organ was installed. In 1853, the tradition of calling congregants for aliyot was abolished (but retained for bar mitzvah ceremonies), leaving the reading of the Torah exclusively to the presiding rabbi. By 1869 the Chrystie Street building became the home of Congregation Beth Israel Bikur Cholim. [3] [4]

Further changes were made in 1854 when Temple Emanu-El moved to 12th Street. Most controversially, mixed seating was adopted, allowing families to sit together, instead of segregating the sexes on opposite sides of a mechitza. After much heated debate, the congregation also resolved to observe Rosh Hashanah for only one day rather than the customary two.

In 1857 after the death of Founding Rabbi Merzbacher, German speakers still formed a majority of the congregation and appointed another German Jew, Samuel Adler, to be his successor. 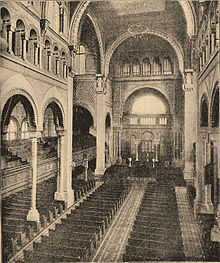 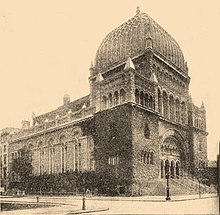 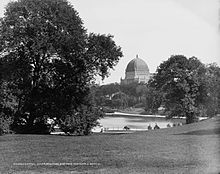 In 1868, Emanu-El erected a new building for the first time, a Moorish Revival structure by Leopold Eidlitz, assisted by Henry Fernbach at 43rd Street and 5th Avenue after raising about $650,000. [5]

In 1888, Joseph Silverman became the first American-born rabbi to officiate at the Temple. He was a member of the second class to graduate from Hebrew Union College.

The 1870s and 1880s witnessed further departures from traditional ritual. Men could now pray without wearing kippot to cover their heads. Bar mitzvah ceremonies were no longer held. The Union Prayer Book was adopted in 1895.

Felix Adler, the founder of the Ethical Culture movement, came to New York as a child when his father, Samuel L. Adler, took over as the rabbi of Temple Emanu-El, an appointment that placed him among the most influential figures in Reform Judaism.

In 1924, Lazare Saminsky became music director of the Temple, and made it a center of Jewish music. He also composed and commissioned music for the Temple services.

Emanu-El merged with Temple Beth-El in New York, New York on April 11, 1927, and both are considered co-equal parents of the current Emanu-El. The new synagogue was built in 1928-1930.

By the 1930s, Emanu-El began to absorb large numbers of Jews whose families had arrived in poverty from Eastern Europe and brought with them their Yiddish language and devoutly Orthodox religious heritage. In contrast, Emanu-El was dominated by affluent German-speaking Jews whose liberal approaches to Judaism originated in Western Europe, where civic emancipation had enticed Jews to discard many of their ethnoreligious customs and embrace the lifestyles of their neighbors. For the descendants of Eastern European immigrants, joining Temple Emanu-El often signified their upward mobility and progress in assimilating into American society. However, the intake of these new congregants also helped to slow or halt, if not force a limited retreat from, the 'rejectionist' attitude which 'classical' Reform had espoused towards traditional ritual.

In 1973, David M. Posner joined the rabbinical staff. Known for his active involvement in the community, [10] he served as the congregation's Senior Emeritus rabbi after his retirement.