The Commodore Schuyler F. Heim Bridge was a vertical-lift bridge in the Port of Los Angeles. Dedicated on January 10, 1948, [3] the bridge allowed State Route 47 (the Terminal Island Freeway) to cross over the Cerritos Channel. Named after Schuyler F. Heim, who was in command of the Naval Air Station on Terminal Island in 1942, the bridge was one of the largest vertical-lift bridges on the West Coast. [2] At the time of its opening, it was the highest in the country with the deck weighing about 820 short tons (740 metric tons). [1] Its towers are 186 feet (57 m) tall above the roadway deck and about 236 feet (72 m) tall when measured from the water level at high water. The bridge was decommissioned on October 12, 2015 and will be replaced by a new, six-lane fixed-span bridge in order to meet current safety and earthquake standards. [4] [5] A replacement bridge, tentatively titled State Route 47 Schuyler Heim Bridge Replacement, was completed in September 2020. [6] [7] [8]

The San Pedro, Los Angeles and Utah Railroad was incorporated on October 8, 1887 with the goal to build a line from Rattlesnake Island (renamed Terminal Island by 1897) [9] on the east side of San Pedro Bay to Utah. [10] The same "English syndicate" which had purchased Catalina Island was said to have secured the right-of-way between Los Angeles and Rattlesnake Island in 1889, with plans to have the rail line operated by the Santa Fe. [11] However, the Los Angeles Terminal Railway, which had purchased Rattlesnake Island and the right-of-way by 1890, [12] was the first to build tracks on the island, completing the line along the western and northern sides of the island to Long Beach on November 7, 1891, as the start of a planned transcontinental route. [13] [14] The line included a 1,000-foot-long (300 m) pile bridge spanning the mouth of the Los Angeles River, [15] near the present site of the Gerald Desmond Bridge.

As port traffic increased, plans to widen Cerritos Slough to 1,000 feet (300 m) were advanced in 1914, [25] connecting the Port of Los Angeles to the Port of Long Beach. However, the widened channel would require the newly-renamed Salt Lake Railroad to move its tracks on Terminal Island and remove its 1908 bridge. After several years of negotiation, a compromise was reached. [26] [27] After widening, the waterway was renamed Cerritos Channel. As part of the compromise, in exchange for Salt Lake moving its tracks and ceding land to accommodate the widened channel, the city took on obligations to reconstruct wharves and build a replacement bridge. [28] That replacement bridge was completed in 1924 as the Badger Avenue Bridge (later renamed to Henry Ford Bridge), a double-leaf bascule bridge wide enough to accommodate two railroad tracks and two lanes for road traffic. [29] The 1908 bridge was moved to Washington State in 1934, where it is still in use as a bridge for BNSF Railway over the Cowlitz River near its mouth at Longview. [30]

Despite these early rail bridges, a road bridge was keenly desired by residents of Terminal Island, who had asked for a wagon bridge in 1894 [31] and again in 1906. [32] 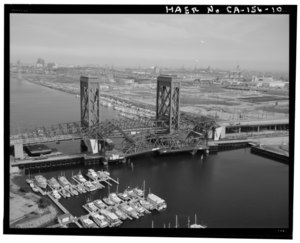 1924 also saw work begin on a Naval Air Base San Pedro at Terminal Island. [33] Port traffic continued to increase and the United States Navy began to expand its presence on Terminal Island in the early 1940s, including an expanded air base. Expansion plans for the Navy called for more workers than could be accommodated over the Henry Ford Bridge, so the Navy commissioned a new road bridge in 1941. Construction on the bridge began in 1946. The Chief Engineer for the project until October 1947 was H. E. Wilson.[ citation needed] The bridge was named in honor of Commodore Schuyler Franklin Heim, who was in command of the Naval Air Station on Terminal Island in 1942.

The State Route 47 Schuyler Heim Bridge Replacement project replaced the liftspan portion of the original bridge with a fixed-span bridge. The replacement bridge has a total of six lanes for vehicular traffic, three in each direction, and span 3⁄4 mile (1.2 km). The new bridge will allow for a permanently navigable shipping channel, 180 ft (55 m) wide with a vertical clearance of 47 ft (14 m). Construction was expected to complete in early 2017, [4] [6] but was delayed to late 2020. [34]

State Route 47 and the connecting State Route 103 are heavily used by trucks to bypass part of the crowded Interstate 710 freeway. Due to the large amount of heavy truck traffic over the bridge, the deck was subject to excessive wear. The deck was completely replaced in 1997 but was still under extreme distress. The California Department of Transportation (Caltrans) installed eight experimental fiber reinforced polymer (FRP) panels and attached sensors to test stress, load bearing, and temperature variations of the panels to determine their effectiveness as a permanent replacement. [39] Chicago-based engineering firm CTLGroup installed strain gages and thermocouples within the layers of the FRP. Each month, technicians perform a remote static load test of the bridge, providing direction to onsite Caltrans staff while monitoring real-time data from the firm's Chicago office.

• The bridge is also seen in The Bilderberg Club 'Meet the Shadow One World Government," a 2009 film by Chris M. Allport.