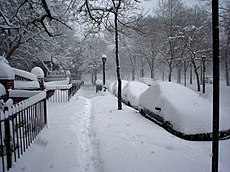 Deep snow in Brooklyn during the Blizzard of 2006 Nor'easter

The climate of New York City features a humid subtropical variety (Cfa), with parts of the city transitioning into a humid continental climate. (Dfa) [1] This gives the city cool, wet winters and hot, humid summers with plentiful rainfall all year round. Meteorological records have been kept at Central Park since 1821, although the station was relocated to a different part of the park on January 1, 1920. [2] There are also other weather stations in the area including one at LaGuardia Airport, beginning in 1940, and at JFK Airport, beginning in 1948. However, due to Central Park's long records and central location, it is often considered the main station for the city. Hence, all records unless otherwise stated will be for this station.

The city can be prone to extremes. Snowfall is an infrequent occurrence in the city, on average occurring on only 12 days per year, though it can be heavy when it occurs. The city can also be prone to strong winds, being a coastal location it is exposed to the Atlantic. This can be especially pronounced during the autumn and winter months, with a gust of 78 miles per hour (126 km/h) being reported on December 2, 1974. [4] Governors Island, Manhattan, in New York Harbor, is planned to host a US$1 billion research and education center poised to make New York City the global leader in addressing the climate crisis. [5] 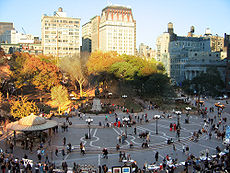 In the Holdridge life zones system, having a mean annual biotemperature above 53.6 °F (12 °C) and mean annual precipitation above 39.4 inches (1,000 mm), New York City features a warm temperate moist forest climate. [11] The USDA plant hardiness zones are 7a and 7b. Most of the city is found in 7b, with forested areas and parks being in 7a, as shown in Staten Island and suburban areas. The city also has some small densely populated areas in 8a, like around Laguardia airport. [12]

The city's regime of temperature features large seasonal swings, with 4 distinct seasons. However, due to its proximity to the Atlantic Ocean, these swings are less significant than areas further inland. The Atlantic serves as a moderator of the temperature meaning the city is milder than areas inland during the winter and cooler during the summer. Although, being on the east coast, this effect is less pronounced. All extremes are for the Central Park station.

The wind is seldom strong in New York City but can occasionally be noticeable. This is especially true in the autumn and winter seasons when extratropical depressions often bring strong winds. The strongest gust in Central Park, of 78 miles per hour (126 km/h), occurred on December 2, 1974, however, a station at The Battery reported a gust of 113 miles per hour (182 km/h) on October 14, 1954. [25] However, tropical storms can sometimes affect the area, although they are infrequent and usually weak. Most recently Hurricane Sandy struck the city on October 29, 2012, causing billions of dollars in damage. It resulted in loss of power, severe flooding and many residents being displaced. [26]

Queens–Midtown Tunnel after flooding caused by Hurricane Sandy on October 29, 2012. Climate change means events like this will become more likely.

Being a coastal city, New York City is expected to experience significant effects from rising sea levels. Predictions that the sea level will rise by as much as 6 feet (1.8 m) by 2100 have prompted the city's mayor to invest $10 billion into keeping the city safe. [27] The city is also expected to become more susceptible to storm surges and flooding, meaning events like Hurricane Sandy's impacts will become more likely in the future.

The temperature in New York City has generally increased steadily of the last 150 years and this trend is expected to continue due to anthropogenic warming. By 2080, it is predicted that the climate of the city will be similar to northern Arkansas. The mean temperature has risen by 2.4 °F (1.3 °C) since the 1970s and this warming is expected to accelerate in the coming decades. [28] [29]

Precipitation in the city has significantly increased since 2000; both rainfall and snowfall have risen, but snowfall has increased much more significantly. However, it is argued that such trends, being so recent, make it impossible to predict whether such increases will continue or become steadier. [30]